The 75,000 Mile Wide Hole In The Sun Could Black Out Earth’s Communications

The sunspot spotted by NASA as our sun creeps toward its solar minimum is 75,000 miles wide. That has huge implications for our satellites and communications systems, and the sunspot could cause some blackouts on Earth.

The huge sunspot has the potential to send out dangerous solar flares known to take out important communication equipment, satellites, and even huge sections of the power grid. This sunspot is the first to appear after the sun was spotless for 2 days and the dark core is larger than the Earth. 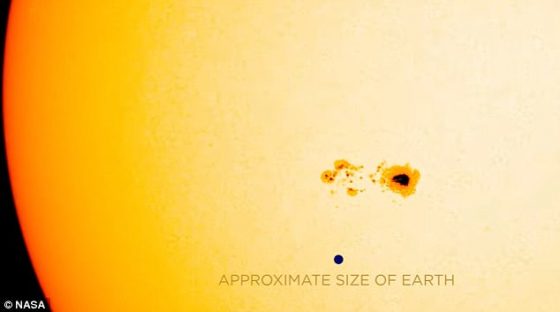 Nasa’s Solar Dynamics Observatory first detected the huge spot last week, and it appears to have lingered through to this week.

Sunspots are darker, cooler areas on the surface of the sun, caused by interactions with the sun’s magnetic field. They tend to appear in regions of intense magnetic activity, and when that energy is released, solar flares and huge storms erupt from sunspots. Such a storm could create stunning auroras around the world, as well as play havoc with power grids, potentially causing blackouts in some areas. –DailyMail

NASA released a statement about the newly visible sunspot. “A new sunspot group has rotated into view and seems to be growing rather quickly,” they said. “It is the first sunspot to appear after the sun was spotless for two days, and it is the only sunspot group on the sun at this moment.”

Watch the video below to see the sunspot rotate into view.

“It could be the source for some solar flares, but it is too early to predict just what it will do,” NASA continued. Forecasters from the NOAA say that there is a 25 percent chance of M-class flares today because the sunspot is directly facing our planet.

Solar flares occur when a buildup of magnetic energy on the sun is suddenly released. They usually erupt from sunspots, temporary dark, and relatively cool patches on our star’s surface where the local magnetic field is very strong. They are broken down into three classes, C, M, or X for strong flares, and A or B for weaker flares.

There’s a tenfold increase in power from one class to the next, so an X flare is 10 times stronger than an M flare, and 100 times more powerful than a C. There’s also a finer gradation within each class, from 1 to 9 in the case of C and M flares. But the number goes higher for X flares, because they’re at the top of the scale and the sun occasionally fires off eruptions more than 10 times stronger than an X1. For example, in 2003, the sun let loose a flare that registered as an X28 before overwhelming the sensors that measured it. It remains the most powerful solar flare ever recorded. –Space

Although this sunspot doesn’t appear to present any major danger just yet, the sun’s approaching solar minimum too, and it’s likely to continue to be a bumpy ride until its cycle ends. As always, things could change quickly when speaking of the unpredictability of the sun.