The Reality Of The Federal Government’s Land Grab 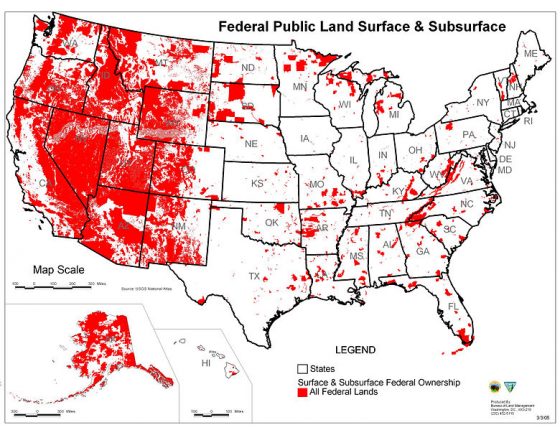 It doesn’t take a genius to realize that when the government declares ownership over land, they also dictate what others may do with said land, often burying the economy in burdensome paperwork and regulations.  And based on the map above, Nevadans have it the worst. Today, the federal government claims to “own” or hold approximately 640 million acres of land or 28 percent of the 2.27 billion acres of land in the United States. Around 92 percent of all the federally owned acres are in the West. According to shocking statistics published by Ballotpedia, the federal government collectively owns 47 percent of all land in 12 western states. Interestingly enough though, states East of the Mississippi River are, for the most part, less controlled by the feds, with only 4 percent of all land owned by the government.

Given the very poor management of the federal government in every aspect, many states in which the feds claim ownership of vast amounts of land, are calling for a reduction in federal land ownership and for the control to be transferred to the states.

Government control of the natural resources gives the federal government tremendous control of the whole economy. The feds then intentionally distort prices and diminish the efficacy of our economic calculation for political gain and oppressive power over civilians. The government ownership of lands also leads to several severe economic problems, such as the most horrific outcome: tyranny. Government officials can use their control of the natural resources to reward politically favored industries (as we all witnessed during Obama’s reign as president when he financially awarded the failed clean energy industry and further indebted the nation in doing so)  and punish their political enemies.  Obama’s $800 billion bailout was an economic disaster and failure of epic proportions – even socialists and liberals saw it as such. But the other disaster of federal land ownership is the government restrictions on the use of resources on government lands, which massively limit economic growth.

According to Sue Lani Madsen, frustrated local federal land managers are hindered by layers of internal regulations that make a timely response to weed outbreaks difficult.  Simply having the feds as a neighbor is more costly and not effective for those who use their privately owned land for farming or any other economic contribution.  Since federal land is exempt from state noxious weed control laws, having a federally owned plot of land next door is bad news for the everyday American land owner.  The feds play by their own rules -the very rules they made up and they don’t care about the peasants they oversee in the process.

Other problems arise due to the mismanagement so engrained within the federal government. Wildfires tend to spread very rapidly in areas controlled by the feds destroying usable land at a much higher rate. As reported by The Economic Collapse Blog, over 2.6 million acres of land has gone up in flames just in 2017 alone.  The feds are horrific with responses to fires, while private businesses tend to take the disaster more seriously.  Since the feds literally don’t care even a small about local issues or concerns, it can be very frustrating for people living in areas where the federal government is in control of vast stretches of the state.

The issue goes deeper than who owns what land, as pointed out earlier in this article.  The federal government is seeking more power by owning land and claiming authority over those who reside in or near it.  The oppressive thumb of the feds is slowly being pressed down on everyone, and those in the West could face eminent domain laws, eviction, or worse, possibly to be left searching for the dreaded FEMA camps many still claim don’t exist for nefarious reasons. Federal power is needed to purge the nation and “cull the herd,” and the land grab by the federal government is necessary for the eventual outcome of complete tyranny.