The Big One? Large-Scale Motion Detected at San Andreas Fault: “The Build-up Is Causing Movement”

As if California doesn’t have enough problems already…

The big one is believed to be due every century or so along major fault lines – and California is long overdue. Eventually, there is just too much built up pressure that must be released.

Although experts don’t know when a major earthquake may hit the San Andreas fault, they expect that it is simply inevitable and have warned for years about mitigating the disaster to come.

Sadly, few of those warnings have been heeded, and major destruction is likely to someday affect, directly or indirectly, most of the tens of millions of residents who live in or near Los Angeles and the surrounding area.

Here are some of the simulations of what they officially say could happen. In reality, the damage and the secondary effect on social order could have an even greater impact:

And the real world data is troubling as well.

Now, researchers have been able to model that build up of pressure along the tectonic plates of the San Andreas using new GPS techniques that have allowed more information:

Analysis of GPS data has revealed new areas of motion around the San Andreas Fault System.

Using data collected by the EarthScope Plate Boundary Observatory’s GPS array, researchers identified 125-mile-wide “lobes” of uplift and subsidence. Over the last several years, the lobes, which straddle the fault line, have hosted a few millimeters of annual movement.

Lead author Samuel Howell, a researcher at the University of Hawaii at Manoa, explained in a news release. “Using this technique, we were able to break down the noisy signals to isolate a simple vertical motion pattern that curiously straddled the San Andreas fault.”

Researcher Bridget Smith-Konter said: “The powerful combination of a priori model predictions and a unique analysis of vertical GPS data led us to confirm that the buildup of century-long earthquake cycle forces within the crust are a dominant source of the observed vertical motion signal.“ 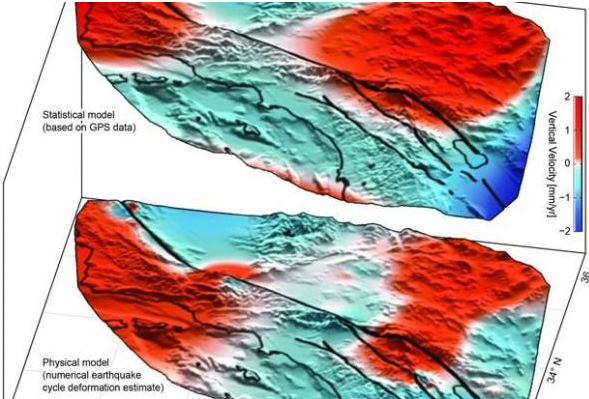 As SHTF recently reported, the news is not good.

According to the leading scientists in the study of tectonic plates and movements, earthquakes must periodically relieve plate pressure (about 16 feet worth of movement every century), but that has not happened on the San Andreas fault during that time period – in fact, the event is overdue.

Scientists have renewed their warnings that the faultline “looks like it’s locked, loaded and ready to go.” As the L.A. Times reported:

Southern California’s section of the San Andreas fault is “locked, loaded and ready to roll,” a leading earthquake scientist said Wednesday at the National Earthquake Conference in Long Beach.

The San Andreas fault is one of California’s most dangerous, and is the state’s longest fault. Yet for Southern California, the last big earthquake to strike the southern San Andreas was in 1857, when a magnitude 7.9 earthquake ruptured an astonishing 185 miles

[…] “The springs on the San Andreas system have been wound very, very tight.

If/when a major earthquake does hit the L.A. metro area, there will be a significant danger of societal collapse – with every major service from water, food, gas, electricity, transportation, sewage and more under threat of severe – and potentially prolonged – disruption.