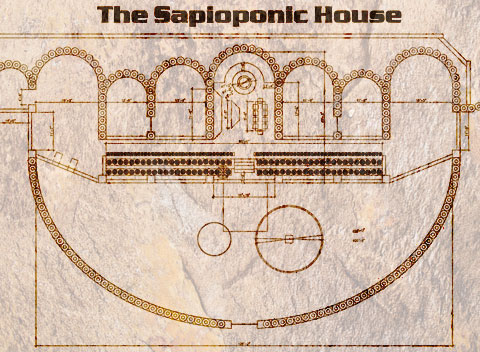 How would you build your off-grid piece of paradise?

There are infinite possibilities, and much depends upon budget, time and resources, but the ability to live away from society, without depending upon cities, utilities and with the least amount of burden from the State factors into the ideal vision for most preppers and patriots.

Adam Vs. The Man host Adam Kokesh has announced his own bold new project, to build a state-of-the-art, first of its kind “Sapioponic Earthship” that he hope will not only be the perfect retreat from society for he and his fiance, but also something that others will emulate and spread across the pockets of freedom still remaining throughout the American landscape.

“We’re setting up a homestead. This is, as far as I can tell, the new American Dream. Buy an RV, buy a piece of land and build until you’ve engineered your perfect life from the ground up and truly become the entrepreneur of your own happiness.”

Like other off-grid homesteads, it will likely include various forms of off-grid solar power, aquaponic gardening, greenhouses, chickens, composting,  and construction based on alternative building materials like earth-bags, glass bottles, cans, old tires and straw bales.

Adam Kokesh and his fiancé Macey Tomlin, have just had their offer on 11 acres in Ashfork Arizona accepted. They plan on building the first ever Sapioponic Earthship. This is a massive project, and could take up to 9 months. They are asking for donations for supplies, including: cement, rebar, tires, bottles, and cans. As well as many 76″x34″ and 76″x46″ standard double pane PDRs as they can get. They are also open to volunteers…

The Freedom Homestead Academy in Ashfork, Arizona will offer the ability to experiment with alternative building techniques, develop and distribute new open-source technologies for homesteading…  Adam Kokesh went to the Earthship academy in Taos, NM., and now he is ready to build his own Sapioponic home.

What exactly is “sapioponic”? Basically, it is similar to aquaponics, but human waste and compost provide the breakdown nutrients to support the gardening system, while all other energy system are built to be self sustaining and extremely energy efficient – collecting rainwater and solar energy and utilizing them to the point of “zero waste.” Read more about the plans here:

The objective of building The Sapioponic House is to create a fully self sustaining off-grid home that can support 4 people. It will gather energy from the sun as its only source of electricity and rainwater as its only source of water. It will produce zero water or sewage waste of any kind except in the form of evaporation. It will primarily heat and cool itself with passive solar energy and thermal mass requiring for supplemental cooling only cooling tubes and transom windows, and for supplemental heating only the occasional fire. Rainwater collected on the roof will go to a cistern in the berm behind the house. From there it will go to the water organizing module (WOM) in the WOM hole where it will all be filtered to drinking water quality.

The waste water in the reservoir is treated like the water in an aquaponic system and is used to supply nutrients to planters that have live cultures and red worms like any aquaponic system. So what we have is a food production system that turns all solid waste into plant food. The system runs like a hydroponic system with flood and drain trays on a timer, but instead of adding artificial nutrients to a sterile system, human waste and any would compost are the inputs. It’s like an aquaponics system but with the people in place of the fish. Hence, sapioponics.

There is a diagram posted on The Homestead Guru, and it is a term that Kokesh intends to define and unveil as the project moves forward: Kokesh – who has made Freedom! his mantra, and the title of his book – has remained a prominent voice in the alternative media and may serve as another inspiration to those wishing to buck the system and set out on their own.

As noted above, the Earthship Biotecture Academy in Taos, NM inspired Kokesh’s work – which is continuing through the The Freedom Homestead Academy in Ashfork, Arizona – and can provide ideas, inspiration and blueprints for others wishing to endeavor in their own homesteads. Many similar organizations exist throughout the country.

Every bit of decentralization and self-reliance weakens the power of the state, and builds up the possibility that the republic and the American Dream might someday flourish again.

Further, these homesteads will be among the best suited for a grid-down scenario, a collapse of cities and ensuing civil unrest and even martial law scenarios – where forces will clamp down on urban inhabitants first.

With the right focus on prepping, it could also be one of the best ways to survive, well, just about anything. But there are also many challenges and potential pitfalls, so an enormous amount of forethought, hard work, preparation and planning are essential.

What features would be most critical in your homestead?

The Realities Of Choosing Your Survival Retreat Location

Why a Prepper Homestead Isn’t a Good Plan for Survival: “Raising Your Own Food Takes Time”