This article has been generously contributed by Mark Solomon of the Financial Survival Center. 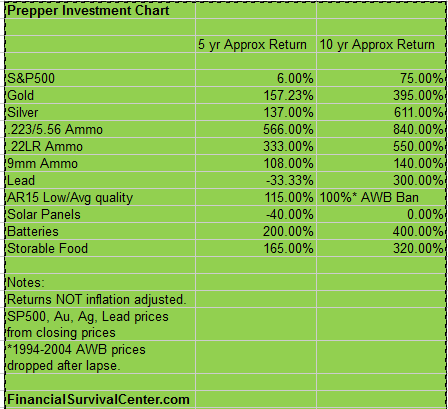 For the small part of the general populace that is aware of potential challenges ahead, economic decisions are much more complicated. We are known as Preppers for our actions that allow us to be ready to handle most foreseeable future scenarios without needing significant assistance.

Unlike those that either do not see any potential challenges to the current level of society functioning (utilities working, stores supplied, no wide-spread civil strife, etc.), or may see some questionable signs in the future and do not choose to prepare for them, preppers take action. We build the ark so to speak, before the rain begins. Then we stock it for the journey.

This brings up the great dilemma in being a prepper: How do we divide or allocate our limited money and resources the wisest way possible. We want to be both prepared for eventualities and still have opportunities for profit. We want to be prosperous no matter what happens, either a free stable trend, or to hell in a hand basket. We will examine some of these decisions and what tools we need to land on the right side of profitable vs prepared.

A bit of background about me: An engineer by training where I ran multiple projects over $25 M in budgets, also a former Financial Adviser, Futures Commissions Merchant (commodities trader), money manager, and a life long prepper. Despite plenty of formal training in the “socially acceptable Financial Planning methods” I will not use them for the most part in this paper. We are stepping beyond the fantasy world of finance, into the real world of hard goods, hard currency, and hard numbers.

Assumptions for getting started:

We have a source of income. We are not massively in debt. We are willing to invest and or speculate in the stock market, commodities (like gold, silver, platinum, corn, soy, cattle), real estate including rental, residential, commercial, and farm land.

If we do not have a source of income, then job one..through 10, is to get one fast. Preferably a job that offers income that can rise with inflation.

If we are seriously in debt, than getting out of debt probably needs to absorb 50% of our spendable income, with the other 50% going to prepping, not investing. After the prepping phase is at a point where 3 months of food, water and basic supplies are handled, then a cushion fund is the next step.

Ideally, 3 months of a cushion fund is a foundation. Once we have that in place, the decision making strategies discussed here can be applied for deciding what to do with funds above and beyond necessary expenditures.

Willingness to speculate or the more politically acceptable term “invest” is one of the keys to surviving and profiting through a currency collapse. There is almost no other means of both surviving and profiting through a period of currency debasement, economic collapse and financial lock-up then riding through the storm using the financial markets – until the collapse is at hand. This point of view is extremely controversial.

Here is why speculating in the collapsing market is a choice I personally make even though we all know it is fully manipulated.

The logic for speculating:

In short, we are all speculating no matter how far from it we want to be. A fiat currency turns us all into unwilling gamblers where we can have an opportunity to keep pace or beat inflation, or lose consistently to the inflation demon.

Not to beat a dead horse, but speculating is a key skill for a successful prepper – and that does not mean strictly in the financial markets.

Our universe of choices for investing our money as preppers is far wider than the average, non-prepper investor.

Guess what one of the top “investments” of 2013 is so far? Most financial advisers or CNBC fans would quickly scan their screens for the top stock or commodity. They might come up with Aurizon Mines and others that gained around 20% or more.

Financial investments from the markets return absolute chicken feed when compared to how much .223 ammunition has increased: from 200% to 300% depending on the market. No capital gains taxes for small purchases. Yes, there are shipping and handling costs, but nonetheless, ammunition has been one of the best investment opportunities of the last 48 months. This is where preppers have a great advantage over traditional investors.

We get to invest and prepare at the same time.

Our decision tree looks much broader than someone that would never consider stored food, ammunition, firearms, specialty vehicles, food production equipment such as seeds and fertilizer, construction materials, energy production from solar power to batteries, and many other items as much more than preparation gear – but also investments. Additionally and most critically, books, DVD’s, training, and knowledge sources can also be considered as some of the most valuable investments.

Here are some of the items a prepper might consider buying and their price rises over the past several years:

For comparison, the stock market return for SP500 has been about 15% from 2011 until now Feb/2013, and about 6% from 2007 to now. Considering inflation – the average SP500 investor has lost significant money

Storage batteries across the board – including lithium carbonate, nickel cadmium, nickel metal hydride, lead acid, and nickel zinc batteries have seen price increases of 15-25% per year. This price increase stems from raw materials, another aspect from E.P.A. regulations, and the near monopoly on mining and processing a few large manufacturers, plus the demand from Asia..but most of all, rampant money printing from around the world.

Not all prepper related items have increased. Solar panels have thankfully dropped in price an average of 40% due to China flooding the market and new sources of silicon providing the raw material in abundance. However, the overall system costs have not decreased for an alternative energy system.

Items such as generators, pumps, hand and power tools, machine tools, and farm implements have skyrocketed in cost. Throughout history, machine tools have been a key source of productivity, social advancement, political power – as they could be turned to making weapons, and ability to master a land and people. For example of the dramatic price increase or investment return, a small lathe such as this one:

Could have been purchased for about $400 in 2008. That same lathe now sells for $999 and is sometimes difficult to even find in stock!

Food prices have been increasing dramatically..February 2011 according to NY Times saw one month increases of 3.9% with lettuce jumping 27%. Beef prices are set to soar as the drought and environmental rules decimate the farmers and ranchers. This translates to storable food becoming an investment option with average yearly value increase above inflation at 7% to 10%.

The summary for these facts is: Until you have far more than you want, need, or can use for barter, you are far better off buying more arms, ammo, food and tools, than getting involved in the financial markets. This is advice from a financial speculator, not a gun shop owner, someone selling freeze dried foods, or tools. Stock shares can be issued by the millions, while rifles take hard work, materials, skill, and time to produce by the hundreds. Same for ammo, gold, etc. No contest. Get prepared the financially smart way – and stay away from the financial markets until you have all the gear you want.

This article has been generously contributed by Mark Solomon of the Financial Survival Center.