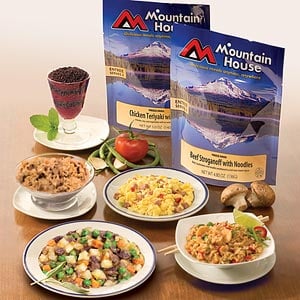 Oregon based Mountain House, a division of Oregon Freeze Dry, Inc., has confirmed reports of shortages in their freeze dried food product line.

In an email to SHTFplan.com, Mountain House Sales Division Manager Melanie Cornutt said it is true that larger distributors and dealers are receiving limited stocks of inventory, and that Mountain House is unable to provide freeze dried foods in #10 cans to smaller distributors due to significant global demand. A number #10 can is generally purchased for larger camping groups or for emergency food storage, as it holds approximately six pounds, or 13 cups, of food with approximately 10 – 25 servings per can.

When asked what the cause for the atypical demand may be, Ms. Cornutt said, “we have nothing concrete, but we believe this is contributing to most of it -Â  Federal reserve talking about buying $600 billion worth of treasury notes, which could de-value the USD, hence causing inflation fears.Â  In addition, we have had many Americans call and express concerns with our current government.”

Though recent reports suggest that US emergency service agencies, law enforcement and the military have stepped up preparedness efforts, Ms. Cornutt rebuffed rumors that the Federal government may be responsible for acquiring much of the food for emergency services preparations saying, “the Federal Government/FEMA are not making large purchases of our Mountain House #10 cans.”

A leading online emergency products firm and distributor to agencies such as Department of Homeland Security and the TSA also put this rumor to rest, saying the government “has not purchased more than normal,” in recent months.

Nitro-Pak, another preparedness web site and large distributor of Mountain House Freeze Dried Foods, has alerted customers that emergency food demand is so high, their processing time for new orders is approaching one month, citing inflation fears as the main culprit. “Orders with #10 can foods or food reserve units are processing in about 28 business days due to the extremely high demand that has been caused by our nationâ€™s current political & economic uncertainty as well as high inflation fears. We anticipate prices will soon rise as are all food prices worldwide,” reads a shipping update memo on the web site.

When asked about inflation fears, a Nitro-Pak representative said that inflation resulting from government policies seems to be the main motivating factor for their customers. The representative also cited the popularity of the preparedness trend, suggesting that recent Glenn Beck episodes promoting food storage may have something to do with the interest in personal food preparedness.

Mountain House says that the production delays within their freeze dried food division should be resolved soon. “We anticipate this to continue through February/March of 2011,” according to Melanie Cornutt, “this timing may change, but as of today, this is the best estimate we have.”