Dawn of the Homemade Submarine: “Potentially Intriguing Vessel For A Post-Apocalyptic World” 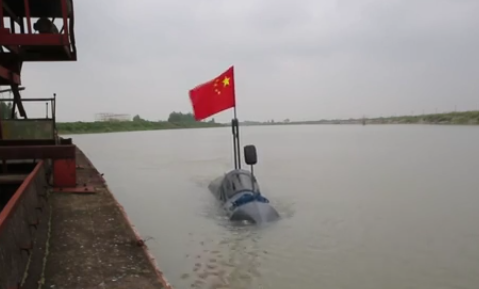 A Chinese man, reportedly a farmer, debuted this one-man semi-submarine which he invented and won a patent for. Basically shaped into a steer-cigar tube with a hatch and a propeller system, it costs only around $760. RT reported:

It is a potentially intriguing vessel for a post-apocalyptic world of human ingenuity and a pestering will to survive, maybe situated somewhere between Mad Max and Waterworld. The only problem?

It doesn’t actually dive to the depths like a full-blown submarine equipped for modern warfare. At best, it only submerges 1 meter, or around 3 feet… basically putting it back in boat category.

On the other hand, it could be utilized for stealth escape or travel in a crisis. More likely, it will just stand out on the waterways as a unique contraption.

Or, maybe it could spawn a new market of semi-submersible sport craft, or constitute an intimidating fleet of Chinese pirates who could hunt you down at around 7 nautical miles per hour.

Either way, it is inventive. Not bad start for a peasant farmer living under tyranny…

Can any of you preppers build a better or more ingenious one?

If you don’t have time for such an elaborate mechanism, here’s how you could improvise a personal water craft in a survival situation – out of next to nothing.

Future of America: Harder Than Anything You’ve Experienced In Your Lifetime