While Oklahoma has had a handful of notable earthquakes over the past century, it was essentially never an earthquake state.

And rightfully so, given that the USGS and other officials, up until quite recently, ranked Oklahoma’s earthquake hazard level at the second lowest level, with a patch of slightly elevated, but still moderately low areas:

According to the statistics that have been released, Oklahoma, in fact, had very few earthquakes (over a magnitude o 3.0) during the past half century – until the year 2009.

That date marks the expansion of fracking in the oil industry, as the Obama Administration signaled an attack on coal and fossil fuels, and the petroleum industry sought to flood market supply to manipulate the political power of oil in certain key regimes around the world: 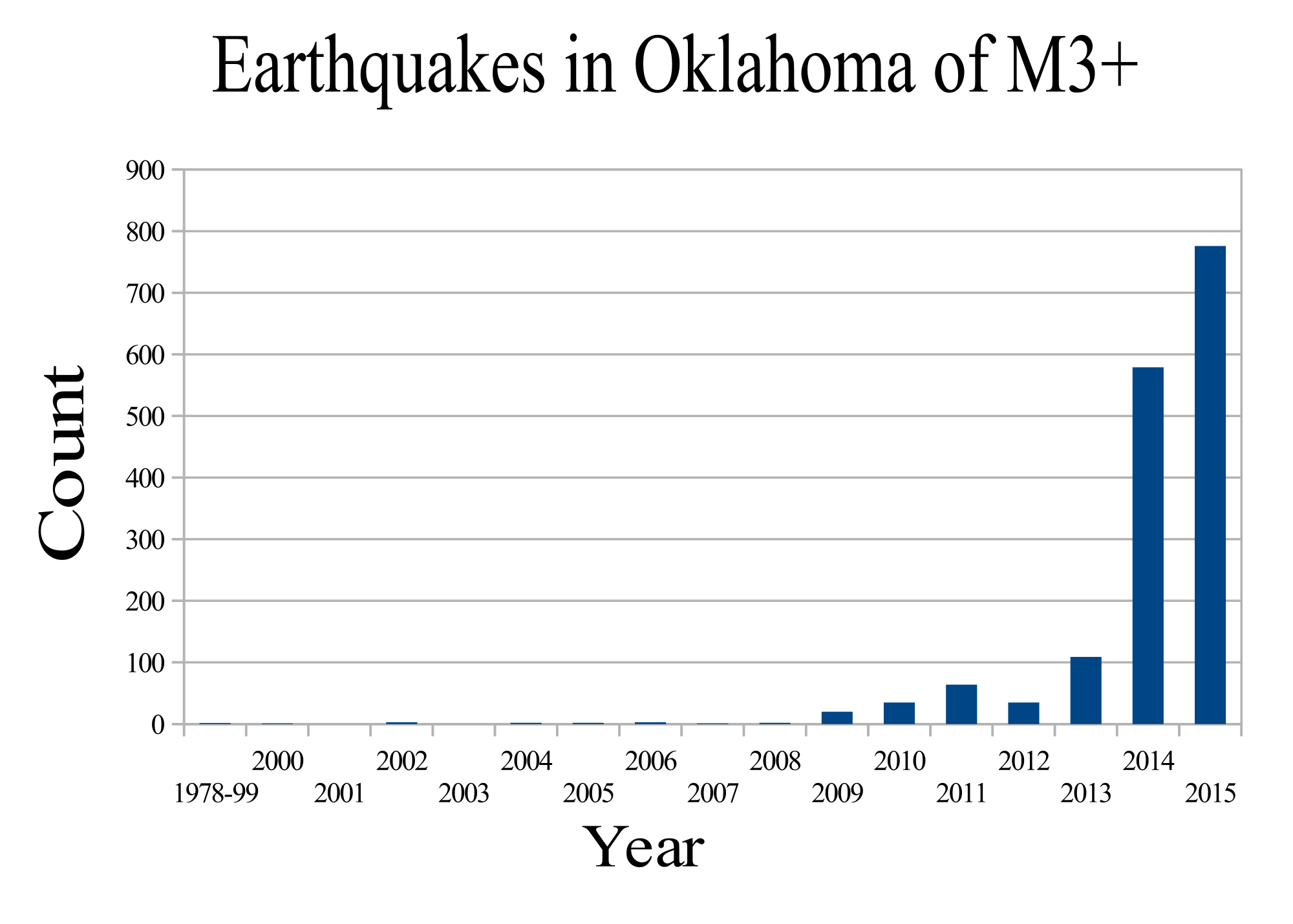 Now, the low key heartland state of Oklahoma is suddenly rivaling San Frascisco as the most earthquake-prone place in the United States.

Oklahoma is the most at risk place in America for man made earthquakes caused by oil and gas drilling, a new USGS quake risk map has revealed.

In its annual national earthquake outlook , the U.S. Geological Survey reported Wednesday that a large portion of Oklahoma and parts of central California have the highest risk for a damaging quakes this year: between 5 and 12 percent.

Natural elevated quake risks exist through much of California, Seattle and the area where Missouri, Tennessee, Arkansas, Kentucky and Illinois come together, known as New Madrid.

Seismologists say Oklahoma’s problem is triggered by underground injections of huge volumes of wastewater from oil and gas drilling.

That’s an insane change in the pattern of earth-shaking seismic activity – and the blame has been cast squarely on man-made drilling and wastewater injection – i.e. fracking for natural oil supplies.

Despite the fact that Oklahoma has a very low risk for naturally occurring earthquakes, the state is experiencing more than just about anywhere else.

This chart, from a single day in 2015, shows how on a day where California sees several significant earthquakes, Oklahoma has dozens, perhaps hundreds of minor earthquakes.

With enough persistence, this is multiplying the region’s chances for these artificially-induced tremors to trigger a massive response from nature. As pressure points are set off, larger eruptions sometimes take place.

In the absolute worst case scenario, what would happen if a large enough earthquake – set off by fracking activities – where to set off a the fuse on the New Madrid fault, where a state over, one of the most critical danger spots for a large scale, mega-disaster to take place. 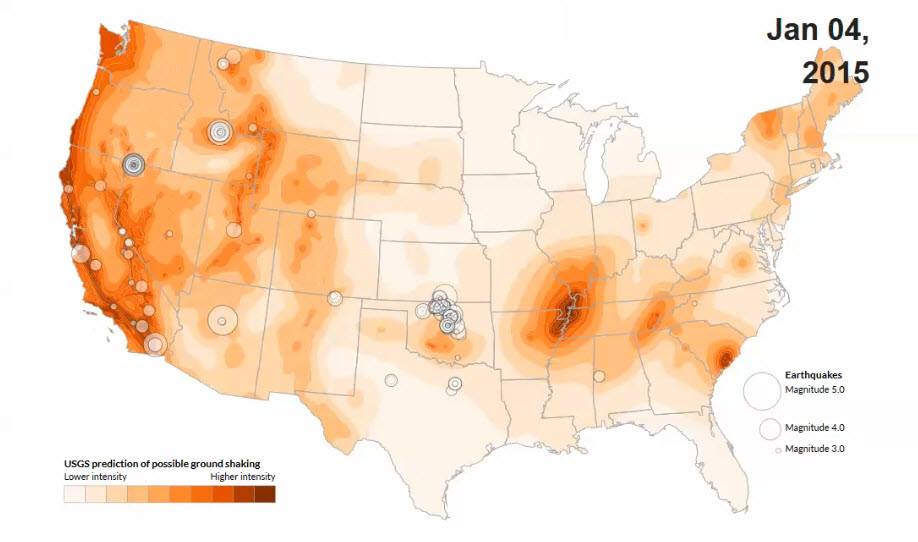 As this map released by the U.S. Energy Information Administration shows, there are three major shale gas deposits in Oklahoma, and thus there has been feverish underground activity in the region. 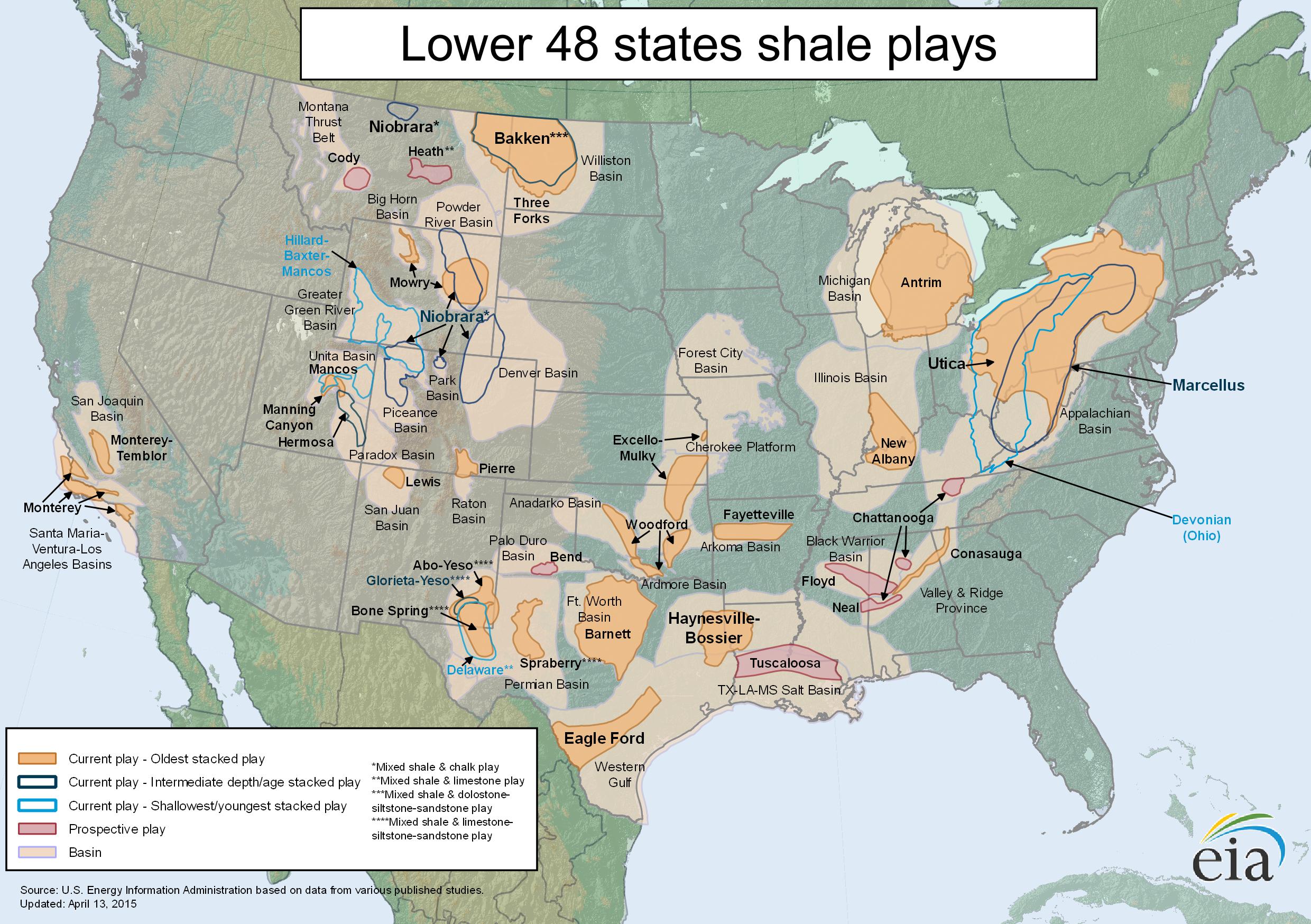 Why exactly this is creating major earthquake disruptions in Oklahoma and other key fracking areas – like North Dakota’s Bakken shale play – is not immediately clear, but extensive study of Oklahoma and debate inside the state government have led to the controversial, but certain link to fracking.

Oklahoma’s Corporation Commission set up regulatory restrictions on the industry requiring a 40% reduction of wastewater well injection activities, which has corresponded in a proportional reduction of earthquakes there – from a peak of about 4,000 per year in 2015, to something closer to 2,500 in 2016, still a huge problem.

So far, artificial earthquakes have not exceeded 5.6 in magnitude, meaning that the chances for a truly catastrophic emergency from fracking activities remains very low for the moment. However, the fact that an earthquake this large was recorded and attributed to non-natural causes raised eyebrows, making us all wonder how far things will go.

To be sure, there is technology already in existence and in the hands of scientists, that can induced man-made earthquakes, tsunamis, volcanic eruptions and the like on a grand scale. Conspiracy-minded observers have already pinpointed several major world events attributed to stealth-state attacks.

What is truly worrying about these artificial earthquakes is that they are becoming more unpredictable, more frequent and more likely to cause actual chaos.

But for now, the property damage is low, and the concerns are environment. In time, however, the concern may be significant loss of life and widespread destruction.

Are You Ready Series: Earthquake Preparedness