Civil Unrest: You’re Pretty Much on Your Own If You Are Caught In a Riot or Other Violent Demonstration

This article comes to us from long-time friend and contributor Lisa Bedford. Visit her fantastic preparedness and planning web site at The Survival Mom and don’t forget to read her latest book.

SHTFplan Editor’s note: As has been noted countless times on this web site and many others, the system as we know it is progressively devolving into chaos. Personal and governmental safety nets that have maintained system stability thus far are being shred to pieces as tens of millions of people overwhelm our government’s food  and medical assistance programs. People are losing their homes, their jobs, and their ability to repay their debt, as well as to make  make ends meet. Like we’ve seen recently in Greece, the middle east, north Africa, and elsewhere, the people of the world are on edge and they’re starting to crack. Over the last few years we’ve seen peaceful protests here in the U.S. turn to sometimes violent demonstrations – including violence from protestors and police alike. Likewise, we repeatedly hear stories of desperation as mobs of people (usually youth and teens) join forces to rob local convenience and retail stores. As the dark cloud of economic malaise worsens across America, so too will the mobs. As such, we must prepare ourselves for the rioting we’ve seen over the last several years to move from our television sets to right outside of our front doors.

What will you do if you find yourself out and about with your family when a flash mob or violent protest erupts? It can happen without warning and very quickly. In the article below Lisa gives us a primer on mob mentality, what to (not) expect from law enforcement, ways to avoid getting stuck in the middle of such an event, and considerations for war-gaming scenarios ahead of time so that you don’t panic if you’re ever faced with a screaming violent irrational mob.

Coming to a Location Near You: Civil Unrest
by The Survival Mom 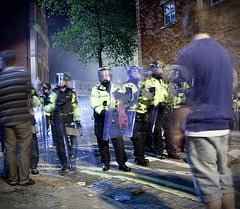 It’s not my imagination.  Angry groups of people are gathering together more and more often, protesting perceived injustice, failure of leadership, the financial malpractice by our government and banks, and just about any unpopular decision made by a governing body.  Sometimes these groups go so far as to cast their anger, and blame, on those far from the source of their original complaint. They may even show up at the private homes of individuals they have targeted for one reason or another.

Riots and mobs have long been a part of life in second and third world countries, and as America’s fortunes continue to spiral downward, it’s highly likely that, at some point in the future, you will be confronted with surviving an encounter with a mob.

Reading the article, a few facts jumped out at me.

The problem with people

People are unpredictable and as a general rule, the larger the group, the lower the overall IQ.  How else can you explain the crazy college students who go out and burn police cars to celebrate winning a championship game?  Think about it.  These young people had to present their high school transcripts and take at least one admissions test in order to be accepted.  Then, they set cars on fire because their team won or lost a game.  A large group of people with a lower collective IQ and fueled by alcohol is an even deadlier combination.

Another issue when it comes to protests and demonstrations is that it increases the cloak of anonymity that people believe they have. They feel free to do what they have always wanted to do but felt constrained by the fear of being identified.  Look at this photo of a protest that took place in Iran and you’ll see what I mean.  How likely will anyone remember the dark-haired guy in the white shirt a third of the way from the front?

Many of these groups are made up of cowardly bullies who would never confront a police officer on his/her own or break windows or strip innocent bystanders, but when they are part of a larger group, they’re emboldened to do things that they would never do alone. 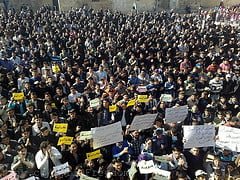 A final issue with mobs of people is that they adjust their behavior to that of those around them.  You can see this occasionally in photos and videos when one protester will glance at others around him and raise his voice, increase his level of anger, raise his fist, etc.  The mob, not the individual, is in control.

Where does law enforcement come in?

I spoke with a few individuals in various law enforcement departments, and here is the gist of their advice: You’re pretty much on your own if you are ever caught in a riot or other violent demonstration.

That’s right.  Police and other law enforcement departments have multiple plans for dealing with angry mobs.  What they don’t have are plans for rescuing you if you are caught in the middle.  You absolutely must have a plan for staying safe.  Not for taking on a hundred people single handed, just staying safe and getting away.

Information can be your best defense 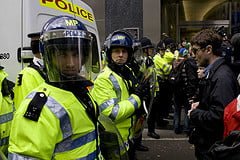 It’s vital to know what is going on in your town as well as national trends.  The protests and violence following the Trayvon Martin incident spread far beyond Sanford, Florida.  Listen or watch local news and sign up for email and/or cell phone alerts from local TV and radio stations.  Very often they will send out alerts far more quickly than law enforcement.

Staying informed is especially important if you live or work in a high-profile area, such as an urban area with many government and corporate buildings.  If this describes you, you should also have a Get Home Bag and multiple routes for getting to a safer place.

Groups such as Communist Students and sites such as Protest.net publicize their grievances, plans, and protest locations.  Law enforcement keeps tabs on these groups, so why not you?  Follow them on Twitter, sign up for their emails (establish a separate email address for this), and track them down on Facebook.  If you hear of a protest scheduled near you, at least you’ll have advanced warning to be prepared or to be somewhere else on that day.

What about real self-defense?

One friend in law enforcement told me that he would want to have a concealed handgun if he were ever caught in a mob.  I have no problem with being armed but would definitely think twice about the circumstances and my plan for self-defense.

For example, firing a gun would immediately identify me as a target, especially if my appearance didn’t fit in with the crowd.  I’m not so sure facing down dozens of angry people is my idea of a good survival plan.  As well, stray bullets could hit innocent people or a police officer.  A firearm might be a better choice for back-to-the-wall self-defense among a smaller mob or if caught in a building that provides a degree of cover.

It’s important to not underestimate the force and combined anger of a large group of people and how rapidly it can amplify.  The smartest self-defense weapon in this scenario is your brain and previous planning.

Here’s the problem with these protests.  They are made up of people, generally angry people, who have a grievance. It takes very little to turn a peaceful protest violent.  In fact, many groups have trained individuals who purposely stoke anger and, hopefully, cause a violent reaction against police, bystanders, and private or government property.  To some, a protest isn’t a success until several of their members have been hauled off to jail.

I recorded this video with more tips for staying safe during a time of civil unrest.  Please add your own suggestions in the comment section and remember to enter this giveaway for a free Big Berkey water filter and a signed copy of my book!

Lisa Bedford is the author of Survival Mom: Everything You Need to Know to Keep Your Family Safe and Secure—No Matter What. Undaunted by the prospect of TEOTWAWKI (The End of the World as We Know It), Lisa Bedford tackles every what-if and worst-case scenario head-on, offering practical advice on how to prepare your family for whatever might come your way.