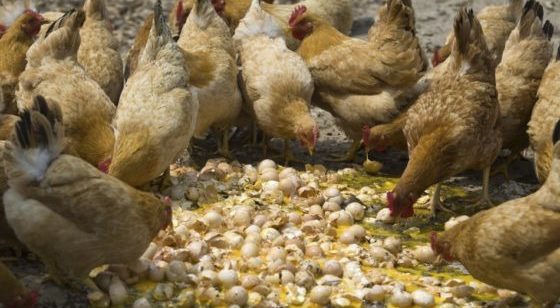 The flu virus is evolving in unpredictable ways in Chinese poultry. For the first time, the avian flu has mutated and infected a human being.

According to New Scientist, the World Health Organization says no similar bird flu strains have ever crossed over to people before and this unexpected jump from chickens to humans was a surprise. The Chinese government has confirmed the first human case of H7N4 bird flu in the country. The patient, a 68-year-old woman in the Jiangsu province, is in stable condition and health authorities believe she will make a full recovery.

According to The Guardian, the patient contracted the virus in December and began to develop symptoms on Christmas Day. Bird flu symptoms in humans include mild to a severe pink eye, fever, cough, sore throat, and muscle aches. The patient was admitted to a hospital on January 1 and stayed until January 22. Although her identity has not been disclosed, media outlets confirmed she likely contracted the virus from close contact with live birds. Although the virus does not appear to be particularly harmful to humans, it sets an interesting precedent since this is the first instance of such transmission to a person from a chicken.

“She had contact with live poultry before the onset of symptoms,” Hong Kong’s Center for Health Protection (CHP) said in a statement of the woman infected. “According to a report from the Chinese center for disease control and prevention, upon analysis, the genes of the virus were determined to be of avian origin.”

Dr. Bettina Fries, chief of Stony Brook Medicine Division of Infectious Diseases, told Newsweek it’s cause for great concern any time a bird flu virus causes disease in humans. “There would not be any preexisting immunity since the virus is new for humans,” Fries said. She also explained that the bird flu could form a dangerous combination with a human flu virus. “The viruses recombine/mix their genomes and you have a new flu virus half human, half bird flu virus,” said Fries. “The swine flu outbreak was a strain with some swine and some human flu. What keeps us safe at the moment from bird flu is that they rarely infect humans,” she said. “A recombination of virus (human and bird flu) could change that and we could find ourselves in a pandemic with a rapidly spreading virus and no preexisting herd immunity, no vaccine.”

The virus was identified through genetic testing, and results were only just released, the South China Morning Post reported. The patient’s close contacts are also under surveillance for signs of the illness, but so far no one has developed any symptoms, CNN reported.

According to the Center for Disease Control and Prevention, the avian flu H7N4 is a subtype of influenza A viruses that infect birds. All influenza A viruses are divided based on their proteins (the HA subtype) and the surface of the virus (NA subtype). Therefore, H7N4 has an H7 protein and an N4 protein.

The Hong Kong CHP statement urged the public to practice strict hygiene both in Hong Kong, an autonomous region south of mainland China and while traveling in China. This includes avoiding living or freshly slaughtered poultry, which is described as any domesticated fowl such as a chicken, turkey, duck, or goose.