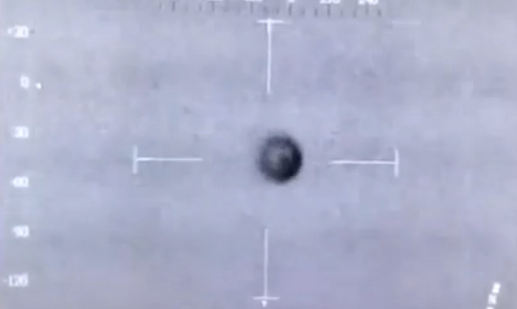 A fascinating and mysterious flying object was caught on cameras by a police helicopter in South Wales in the UK.

And the most bizarre part was that it was invisible to the eye – only a thermal imaging cameras was able to see it.

This truly unidentified flying object – which looks curiously like the classical flying saucers of legend – was videotaped for about 7 minutes, and has left left police in South Wales baffled.

It didn’t register on air traffic radar screens, and it wasn’t visible to the public.

As the Daily Mail reported:

Footage from the force’s heat-seeking helicopter camera shows a spherical object bobbing around in the centre of the screen.

The unidentified craft was filmed by the South Wales police while officers were flying 1,000ft over the Bristol Channel.

[…] Confused police said the mystery object was flying against the wind and was undetected by air traffic control at about 9.30pm on Saturday.

The object – which could not be seen with the normal eye – was captured by thermal cameras.

Police in the UK have solicited public input, and are offering no explanation or positive identification.

Some of the commenters have suggested that the hidden apparatus is engaged in clandestine surveillance and observation, along with, of course, claims that it is connected with aliens, secret Nazi UFO programs and everything else that falls into that category.

The strangest things about the unidentified flying objects (UFO) phenomenon is how much we don’t know.

Setting aside the possibility that these frequent sightings are alien visitors, the real question is just why there is so little disclosure. I mean, the powers that be must know something… it just seems like they aren’t telling the people.

The huge gap between the number of people who report witnessing this phenomenon and the lack of a proper explanation about what is happening is itself astounding.

Why are agencies in the public interest not solving these mysteries? Is seems difficult to believe that higher levels of the government wouldn’t have some serious insights into what is happening…

So it begs the question, what are they really hiding? And is this pat of a secret government program using cloaked and stealth advanced technologies?

It could well be, but anyone with first hand knowledge about it isn’t about to blow the whistle.

Are questions about extraterrestrials just smokescreen for a hidden program? What do you think?