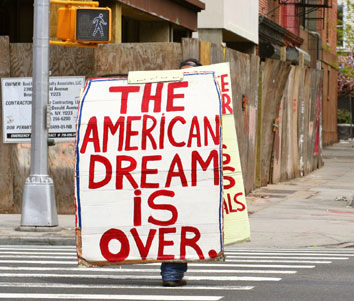 This article, contributed by Tyler Durden, was originally posted on Zero Hedge.

Editor’s Note: It is disturbing that so many indicators for being well adjusted and successful in society are clearly tied to economic well being, while every indicator shows that wages, jobs and opportunities are slipping for the majority of American workers. While financial statistics and numbers make reports, the real life toll this takes out on ordinary American families goes largely unseen.

This article points out the difference between the changes of going to college for the child of a well-off and connected family and that of a low income one. But that is just one slice of the burden that comes with less time to spend with children, and less opportunity to see to their child succeed. The foundation of America may well be crumbling, and the Federal Reserve and economic status quo are waging a silent and very subtle economic war against the family. Take note, and take guard if you can.

By the way, if the wealthy are getting into college based upon their connections and not their merits, what does that tell you about their chances of getting a job after college as well, with so many other ordinary graduates struggling to find meaningful work that matches the skill sets they’ve worked so hard to obtain?

After The Fed Crushed The Middle Class, It Is Targeting The American Family

On a number of occasions this month we’ve drawn attention to the divergent fates of the 80% of American workers whose wages are declining and whose general outlook is concomitantly deteriorating, and the other 20%, whose pay is increasing and who generally feel good about their economic future. We also pointed out that with the correlation between wages and consumer spending now nearly perfect at 0.93, depressed wage growth may indeed drag on US economic output going forward. Given this, we weren’t surprised to learn that the biggest threat to traditional American society is in fact class (i.e. income inequality). This is vividly illustrated in a new work by Robert Putnam (of “Bowling Alone” fame). One key observation: race matters far less than it did in decades past and class matters far more.

Among the educated elite the traditional family is thriving: fewer than 10% of births to female college graduates are outside marriage—a figure that is barely higher than it was in 1970. In 2007 among women with just a high-school education, by contrast, 65% of births were non-marital. Race makes a difference: only 2% of births to white college graduates are out-of-wedlock, compared with 80% among African-Americans with no more than a high-school education, but neither of these figures has changed much since the 1970s. However, the non-marital birth proportion among high-school-educated whites has quadrupled, to 50%, and the same figure for college-educated blacks has fallen by a third, to 25%. Thus the class divide is growing even as the racial gap is shrinking.

As it turns out, having a vast network of Ivy League educated lawyers, doctors, and financiers is extraordinarily helpful in a bind…

At every stage, educated families help their kids in ways that less educated ones do not or cannot. Whereas working-class families have friends who tend to know each other (because they live in the same neighbourhood), professional families have much wider circles. If a problem needs solving or a door needs opening, there is often a friend of a friend (a lawyer, a psychiatrist, an executive) who knows how to do it or whom to ask.

… and when your parents are alums and probably endowment donors, it boosts your chances of getting into college even when, by virtue of extreme intellectual laziness occasioned by a misbegotten sense of entitlement or simply because you’re not very bright, you cannot pass the eighth grade…

Stunningly, Mr Putnam finds that family background is a better predictor of whether or not a child will graduate from university than 8th-grade test scores. Kids in the richest quarter with low test scores are as likely to make it through college as kids in the poorest quarter with high scores (see chart).

Here’s Putnam summing it all up for MarketWatch:

“The most important thing about the experience of being young and poor in America is that these kids are really isolated, and really don’t have close ties with anybody,” Putnam told MarketWatch. “They are completely clueless about the kinds of skills and savvy and connections needed to get ahead.”

The real slap in the face though, has to be the fact that while America’s poor are imprisoned for petty drug offenses, the bread winners of the country’s elite families can perpetrate multibillion dollar financial crimes and, thanks to the networking opportunities that come with belonging to the 1%, be virtually assured that no real punishment with ever be meted out even if said crimes inadvertently collapse the entire global financial system. As we put it in December, “the government is smart enough to realize that it is more lucrative to ‘cooperate’ with the world’s biggest criminal syndicates than to wipe them out and cut off a major source of funding [and] when one is a criminal syndicate, the largest in world history, paying litigation kickbacks in the hundreds of billions to the government is just the cost of “doing business.”

Of course this is perhaps all part and parcel of the Fed’s implicit attempt to exacerbate inequality in America by equating the “wealth” part of the term “wealth effect” with financial assets. The result of this, despite Janet Yellen’s best efforts at explaining to low income Americans that it’s a good idea to have assets, is a growing divide between the rich and the poor and this divide is not only getting wider thanks to the central bank’s efforts to inflate the value of the very types of assets that the poor are unlikely to own, but is in fact now destroying the American family.