Warships & Parades: China “Rapidly Expanding Its Operations Far From Its Own Coast” 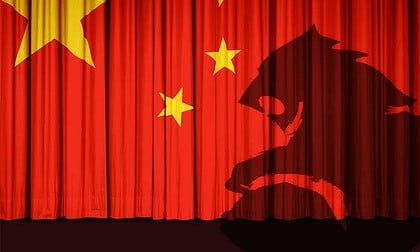 Editor’s Comment: With a major silent economic war underway, China’s military posturing is particularly unnerving – especially since their positioning of Chinese warships off the coast of Alaska took place during President Obama’s official visit there. Does it seem that a message was being sent?

Putin has meanwhile stoked the tensions once again – just after watching China’s massive military parade – with his announcement to formally dump the dollar. How far will China go, and how much is taking place behind the scenes that Americans are not even being told about? Is this all just saber rattling, or will the balance come due and sparks start flying?

It’s never a good sign when the world’s second largest economy announces the most significant revamp of its military in decades, at almost the exact same time that its economy implodes. Unfortunately, this is what just happened. From Bloomberg:

President Xi Jinping will as soon as this month announce the most sweeping overhaul of the Chinese military in at least three decades, moving it closer to a U.S.-style joint command structure, people familiar with the matter said.

The blueprint would unify the army, navy, air force and strategic missile corps under one command, said the people, who asked not to be identified because the proposal hasn’t been released. The plans call for thinning the ranks of officers and traditional ground forces, helping elevate the role of the navy and air force, to better project force in a modern conflict, they said.

Xi is preparing to unveil the proposal in the wake of Thursday’s World War II anniversary parade in Beijing, which will showcase his authority over the People’s Liberation Army and China’s growing clout in the region. The plan to mold the military into a force that meets Xi’s goal of being “able to fight and win a modern war” has been delayed for months as anti-graft investigators swept up dozens of current and retired generals, referring the PLA’s former top general to prosecutors in July.

Xi “mainly employed the anti-corruption campaign in the military to form his absolute command over the army, so that his military restructuring plan can press ahead after being initially stalled,” said Yue Gang, a retired colonel in the PLA’s General Staff Department. “Now, his authority in the army is solid enough for him to flesh out his vision to transform the military and set it on a path to emulate the U.S.”

Such a command system is seen as necessary to improve communications and coordinate modern forces across the various arms of the military. The organizational changes would aid China’s shift from a land-based military to one able to project force far from its coastline.

But there’s more. Just today, it was reported that Chinese warships were seen off the coast of Alaska for the first time ever.

From the Wall Street Journal:

Five Chinese navy ships are currently operating in the Bering Sea, off the coast of Alaska, the first time the U.S. military has seen such activity in the area, Pentagon officials said Wednesday.

The officials said they have been aware in recent days that three Chinese combat ships, a replenishment vessel and an amphibious ship were in the vicinity after observing them moving toward the Aleutian Islands, which are split between U.S. and Russian control.

They said the Chinese ships were still in the area, but declined to specify when the vessels were first spotted or how far they were from the coast of Alaska, where President Barack Obama is winding up a three-day visit.

The presence of the Chinese ships so close to U.S. shores is the latest demonstration of how China’s military is rapidly expanding its operations far from its own coast to protect the nation’s growing global interests.

Mr. Xi is heading to the U.S. in late September for a state visit, which has already been overshadowed by tensions over Chinese military activity, including alleged cyberattacks on the U.S. and island-building in the South China Sea.

China and Russia held joint naval exercises off the Russian Pacific coast—about 2,000 miles west of the Bering Sea—between August 20 and 28, according to the official Xinhua News Agency.

I really hope and pray we can avoid World War III. Unfortunately, with global economic collapse now underway, this might be wishful thinking. The most tragic part of it all is that the status quo leaders in both the U.S. and China who will bring us this war are the ones directly responsible for the economic collapse that preceded it. The status quo will not suffer the consequences of their actions, only the hapless, ignorant citizenry will. Unless we can figure out a way to stop them.

Tensions Between the U.S. and Russia Are Worse Than You Realize – Remarks by Foreign Minister Sergey Lavrov