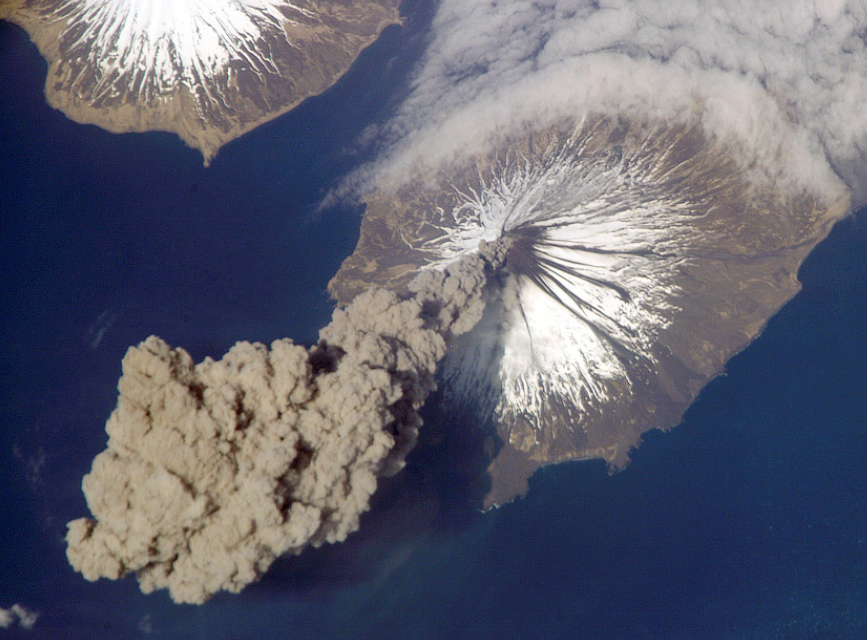 Volcanic eruption in Alaska’s Aleutian Islands as seen from ISS.

Is a major seismic event headed our way?

There is no way to know for sure, but science warns that hotspots like the San Andreas fault in Southern California are “overdue” for the big one, which frequently occurs every hundred years or so. If the earth doesn’t release enough steam from time to time, larger pressures can build up, creating event more catastrophic disasters.

A volcano in Alaska’s Aleutian Islands has been erupting quite a bit lately – and has now had its biggest eruption so far in recent months, sending volcanic ash hurling some 35,000 feet into the air, high enough to disrupt commercial flights. That was the Bogoslof Volcano.

It was a spectacular, if not unsettling event.

Meanwhile, there was a new lava outbreak that was observed in Hawaii.

It seems clear that things are heating up – they are beginning to erupt.

Though things are not necessarily causally linked, there is often a chain of seismic disruptions that occur during a short span of time, and when things heat up in one part of, say, the Pacific Ring of Fire, things sometime explode elsewhere down the line.

Could the intense three hour eruption at Bogoslof Volcano be a sign of bigger events to come? There is frequent seismic activity in the Aleutian Islands, to be sure, but there is also the sense of something immense building up from inside an angry earth.

An Alaskan volcano experienced its largest eruption to date and created a large ash cloud. For the past several months, Bogoslof Volcano has had minor eruptions, but the most recent was its strongest, sending ashes 35,000 feet above sea level.

Residents of the Aleutian Islands are under ash advisory …

The spectacle lasted three hours and was marked by 200 lightning strikes, until it “just shut off,” according to Wallace. While the event did not disrupt air traffic, that may have been sheer luck. Any eruption above 20,000 feet can pose a risk to flights traveling between Asia and the US. In addition, Bogoslof could again erupt at any time.

Are things heating up? Is something massive about to happen?

Stay vigilant, have your preps and escape routes ready, and steady yourself for what may well be trying times ahead.