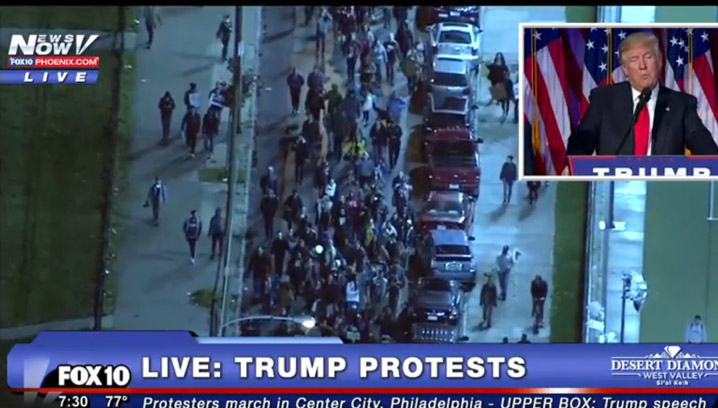 This article was written by Michael Snyder and originally published his End of the American Dream site.

Editor’s Comment: It is almost as if this unprecedented election was designed to bring about chaos. Half the country seem to vehemently hate one of the two candidates, and the election of either one may have been enough to start opposition riots, clashes in the street or worse – widespread, ongoing violence in all corners of the country. The perception that Hillary won the popular vote and pending official totals, which are even now subject to change, are likely to further fuel anger and division among leftist supporters who’ve long feared a Trump presidency.

While many people in the patriot movement are breathing a sigh of relief at the defeat of the establishment’s candidate, it seems that millions on the left are now emotionally tied to a huge collectivist government, and are willing to fight for their own enslavement. Is America peaking out of the darkness, or about to enter into its darkest phase yet?

Did America Really Pass The Test? – Hillary Clinton Is Going To Win The Popular Vote By A Wide Margin

The 2016 election was a test, and it would be easy to assume that since Donald Trump won the election that America passed the test. Unfortunately, it may not be that simple. A closer look at the numbers reveals a very sobering reality. Yes, Donald Trump won far more electoral votes than Hillary Clinton did, and that means that he is on track to become our next president. But Hillary Clinton is going to win the popular vote, and it is likely to be by a very wide margin once all the votes are counted.

As I write this article, Hillary Clinton has a lead of 218,000 in the popular vote, but most of the votes that have not been counted are on the west coast.

In California, Hillary Clinton is leading Donald Trump by a 5,482,166 to 2,966,654 margin, and only 68 percent of the vote has been counted so far. So assuming that the ratio stays about the same the rest of the way, Clinton is going to add at least a million more votes to her lead just from the state of California.

Up in Washington state, Hillary Clinton is leading Donald Trump by more than 370,000 votes, and only 60 percent of the vote has been counted there so far. So she could easily pick up another 200,000 votes in that state.

When everything is all said and done, it seems very likely that Hillary Clinton will have received well over a million more votes than Donald Trump did in this election.

So the truth is that the American people chose Hillary Clinton, but because of some electoral college magic Donald Trump is the winner of the election.

And I am certainly very, very happy that Hillary Clinton is not going to be our next president. Four years under her “leadership” would have likely been the final nail in the coffin for our nation. My hope is that she will now disappear from national politics for good.

But just because she is not going to be our next president does not mean that we passed the test.

In this election, the American people were faced with a very stark choice. Hillary Clinton is the most wicked politician that our country has ever seen, and over the past three decades the American people have gotten to know exactly who she is and what she stands for.

And despite knowing exactly what they would be getting, more Americans voted for her than voted for Donald Trump.

If every vote counted equally, she would be our next president.

I certainly don’t mean to rain on the Trump parade. Christians, conservatives and patriots are right to celebrate this victory by Donald Trump. But the truth is that I don’t believe that we did actually pass the test that we were faced with.

As a nation, we willingly chose Hillary Clinton by a pretty substantial margin.

And don’t think that the radical left is going to forget that Trump lost the popular vote. Already, violence and protests have erupted all over the nation.

Riots erupted in Berkley, San Jose and Oakland shortly after the announcement of Donald Trump as president-elect. Rioters are breaking into stores, vandalizing cars and shooting flares.

One woman in Oakland was hit by a car on Highway 24 just after midnight and has suffered serious injuries after. When she pulled over to the right shoulder, she was surrounded by anti-Trump rioters, who vandalized her car and broke the back window, according to CHP officers.

There were reports of protesters burning American flags in some areas of the country, and there were even brawls outside of the White House.

And once the sun set on Wednesday night, the protests started again. According to USA Today, “thousands of demonstrators” have hit the streets in New York City…

In New York, thousands of demonstrators blocked off streets around Trump Tower near the busy intersection of 57th Street and Fifth Avenue, chanting “hey hey, ho ho, Donald Trump has got to go” and “p—y grabs back,” a reference to tape of a Trump conversation from years back in which he One woman protester was topless while another climbed on top of a tree to see the activity. Taxis, city buses and passenger vehicles stood at a standstill.

In Boston, radical leftists were organizing a giant protest against Trump…

Far-left organizers are planning a mass protest in Boston against President-elect Donald Trump, citing the need to “immediately start fighting against him.”

Approximately 2,300 people have indicated they will gather outside the Massachusetts State House in Boston tonight for a “Boston Against Trump Rally.” According to the Facebook event page, another 5,000 people say they may be interested in attending.

“Donald Trump is the next President of the United States. We need to immediately start fighting against him. We need to build a movement to fight racism, sexism, and Islamophobia,” the event description says.

Sadly, this could be the beginning of a new era of protests, rioting and civil unrest.

Instead of coming together behind the new president, the radical left seems ready to go to war.

So even though Trump won the election, the truth is that our troubles may only just be starting. More than half the country didn’t want Trump, our nation was already more divided than it has been in decades before he won, and it won’t take much for many of our big cities to descend into utter chaos.

Without a doubt, we should be very excited that Donald Trump won the election, but an election victory is not going to magically make our problems go away.

When faced with the most monumental election in any of our lifetimes, Hillary Clinton received the most votes from the American people, and the consequences for that decision may be far more severe than most people are now anticipating.

About the author: Michael Snyder is the founder and publisher of The Economic Collapse Blog and End Of The American Dream. Michael’s controversial new book about Bible prophecy entitled “The Rapture Verdict” is available in paperback and for the Kindle on Amazon.com.