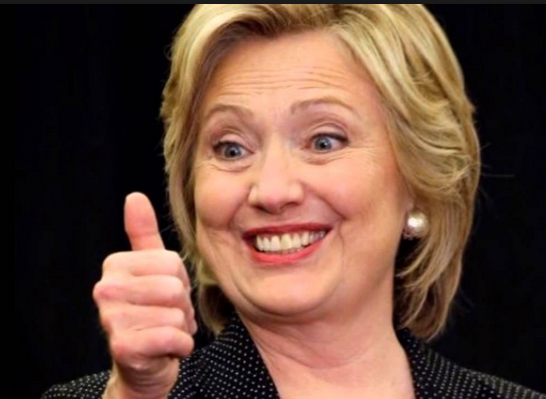 Editor’s Comment: Another masterful stroke for the Machiavellians in Hillary’s camp. Amazingly, Hillary somehow not only won California, but won in a landslide despite poll numbers that showed Bernie Sanders winning there. The sneaky tactic implanted the idea that Hillary Clinton was inevitably the candidate in a way that would make viewers simply accept it as truth.

As a result, voters were discouraged from showing up to vote, and possibly shifted into voting for the presumed winner. In reality, the super-delegates and the mechanism of the DNC party are all that matter. The party elite had this one rigged from the beginning for the ruling powers. Rest assured, there never was a real election taking place. Hillary Clinton was selected long ago.

As we detailed earlier, on a day with no voting, based on AP’s surveys of the un-named anonymous super-delegates, they stated that Hillary had the 2383 delegates to secure the nomination… as Mike Krieger exclaimed,

Last night, the American public witnessed the most egregious example of mainstream media malpractice of my lifetime. By declaring Hillary Clinton the Democratic nominee based on the pledges of superdelegates who have not voted, and will not vote until the convention on July 25th, the Associated Press performed a huge disservice to American democracy on the eve of a major primary day, in which voters from the most populous state in the union (amongst others) head to the polls.

I bet this poll had a lot to do with the decision to call democratic race for Hillary. They’re scared. #VoteBernie pic.twitter.com/lSFP7ZG1T8

If you are a U.S. citizen and you aren’t outraged by this, there’s something seriously wrong with you.

…a day before the California Primary which Hillary was losing in several polls – especially among Indepedents.

However, the discovery of @Cold_Stare that the AP graphic used to tell the world of Hillary’s success had an unusual URL has many questioning whether The Clinton campaign and AP colluded to announce this to avoid a devastatingly embarassing loss in California.

Here is @Cold_Stare to explain…

And a close up on the graphic’s URL…

We are sure this is all a big misunderstanding and in fact an AP reporter named “Secret Win” wrote the story and the dates are not really dates at all… or else it appears Trump and Sanders were 100% correct – “it is all rigged!”

If ever you needed any more proof the captured MSM is nothing but a mouthpiece for the establishment, you got it yesterday. Hillary Clinton, the hand picked surrogate for the crony capitalists, military industrial complex and Wall Street, was declared the winner of the Democratic nomination because some shadowy super delegates supposedly threw their support to her. What a load of bullshit. Hillary was going to lose the California primary today. That would be a huge black eye for her floundering campaign.

The establishment needed to make the votes in California meaningless and keep people from even voting. So they declared her the winner. The timing was calculated. The AP headline and story was written days ago. They waited until the day before the primary to pull the rug out from Sanders and his supporters. Sanders and his people should turn Philadelphia into a war zone at the convention in July. The ruling oligarchy has rigged the game folks and they are telling you your vote doesn’t matter.

When will the American people stand up?