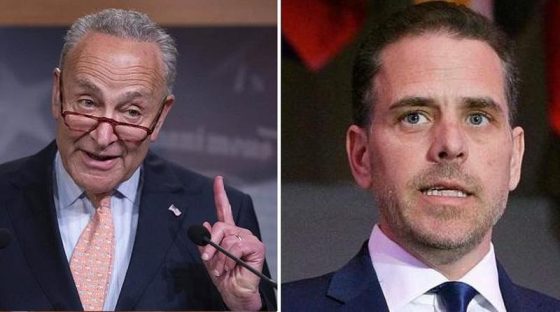 We wouldn’t want to address the heart of the problem, now would we?

Senate Majority Leader Chuck Schumer (D-NY), who staunchly opposed witnesses in the 1999 impeachment trial of Bill Clinton, announced on Sunday that he wants to summon witnesses to appear at a Senate trial if the House votes to impeach President Trump.

Hunter Biden – whose lucrative board seat on a Ukrainian gas company is at the heart of corruption allegations against him and his father Joe Biden – would be a “distraction,” according to Schumer.

“I think we should focus on having a fair trial,” said Schumer in a Monday appearance on CNN‘s “New Day,” adding “Hunter Biden doesn’t add to that.”

“I’m not going to negotiate here in public, but the bottom line is I haven’t seen a scintilla of evidence that Hunter Biden would add anything other than show, circus, distraction,” Schumer added. “If President Trump is so certain that he did nothing wrong, what is he afraid of?”

Schumer, who opposed witnesses in Clinton’s impeachment, says that things were different then.

“The Republicans could not negotiate a fair bunch of witnesses with the Democrats,” he said. “It wasn’t a bipartisan negotiation. It should be now.”

House Democrats have accused President Trump of abusing his office by improperly withholding military aid to Ukraine in exchange for the country announcing investigations into the Bidens and other matters.

Ukraine, meanwhile, had no idea the aid was being withheld at the time of a July 25 phone call in which President Trump made the requests of President Volodymyr Zelensky.