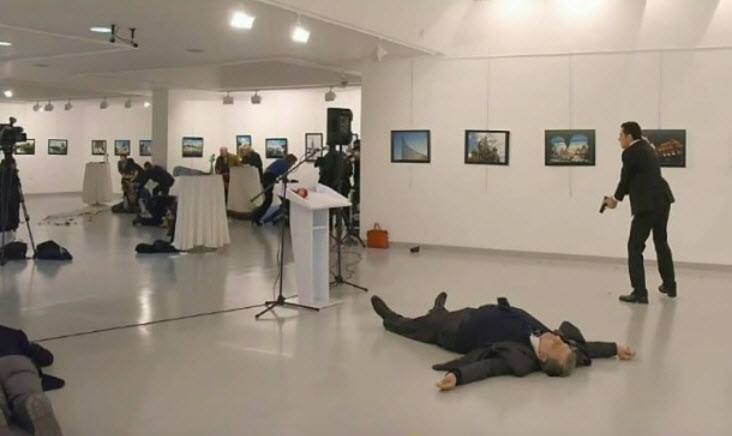 Editor’s Comment: Not to be confused by the shell game of Jabhat Fatah al-Sham, which was formerly known as al-Nusra), this shocking political execution was claimed by a terrorist organization that the United States has – controversially – been tacitly backing in Syria, Iraq and throughout the region.

Since the beginning, the U.S. establishment – including such figures as Sen. John McCain – has been feverishly backing, supplying, arming, training, funding and giving cover for the “moderate rebels”, who are in turn, composed of terrorist organizations that U.S. foreign policy has supposedly been geared towards eliminating and destroying since the War on Terror began.

As the years go on, it becomes more and more clear that the covert U.S. support for this terrorist front is really oriented towards toppling regimes and fueling its agenda for world order domination in the region. Now, as the West is being written out of ceasefire and peace negotiations between Russia, Turkey and Iran, it is increasingly clear that many would support any and all actions in order to keep the region destabilized for as long as possible. How this will play out in the coming Trump Administration, which has indicated its desire to maintain friendly relations with Putin, remains unclear. Nevertheless, it is certain that the situation will remain highly complex and volatile.

The Jabhat Fatah al-Sham organization (formerly the al-Nusra Front) claimed to be responsible for Monday’s murder of Russian Ambassador Andrey Karlov’s in Ankara. The terrorist group claimed responsibility via a letter which appeared on the Internet. The letter was written in Arabic.

In its statement, the group said “one of the heroes of the Jaish al-Fatah, Mert Alt?ntas carried out the execution of Russian Ambassador Andrey Karlov in Ankara,” because the world remains silent to what is taking place in Aleppo, no support comes to the Muslims in the Levant and for the victory of the Syrian people.

The 22-year-old policeman Mevlüt Mert Alt?ntas shot Karlov to death while the ambassador was giving a speech at an art gallery. Turkish media reports said Alt?ntas entered the art gallery without undergoing a security check as he showed his police ID.

Signaling similar attacks in the future, the group also said the assassination of the Russian ambassador was the “first act of revenge” for the women, children and the elderly killed in Aleppo as well as all the Muslims killed across the world.

Immediately after the ambassador’s killing, Turkish government officials and the pro-government media circles pointed to the faith-based Gulen movement as the mastermind of the attack.

Earlier in the day, Turkish media reported that the number of people detained in the investigation over the assassination of Russian Ambassador to Turkey Andrey Karlov has grown to 13. The arrests were carried out in the province of Ankara, in addition to the southwestern provinces of Izmir and Aydin, the NTV broadcaster cited police as saying.

Meanwhile, as reported yesterday, after the ambassador’s killing, Turkish government officials and the pro-government media circles pointed to the faith-based Gulen movement as the mastermind of the attack. Pro-government media outlets ran stories suggesting that Alt?nta? went to a Gulen-linked university preparation course and some of his relatives worked at Gülen-linked organizations. Erdogan has been waging an all-out war against the movement since the outbreak of a corruption scandal in late 2013. The government’s crackdown on the movement reached new heights with a failed coup attempt on July 15 as the government held the movement responsible for the coup attempt. The movement strongly denies having any role in the failed coup.

Turkish Foreign Minister Mevlut Cavusoglu even told his US counterpart John Kerry in a phone conversation on late Dec. 19 that both Turkey and Russia “know” that the Gulen movement is behind the ambassador’s murder. However, in a statement early on Wednesday, the Kremlin said it was too early to conclude who was behind the murder of Russian ambassador Ankara.

In the meantime, one of the advisers of the Turkish-Islamic scholar Fethullah Gulen denied allegations by an unnamed senior Turkish security official of “very strong signs” that the gunman who killed the ambassador belonged to Gulen’s movement. Allegations by an unnamed senior Turkish security official are “laughable” and intended to cover up lax security, the adviser, Alp Aslandogan, told Reuters on Monday. In another statement on Monday, Gulen condemned the assassination of Russia’s ambassador to Turkey as a “heinous act of terror” and urged the Turkish government to identify anyone who aided the gunman.

In other news, Tukish Hurriyet reports that the allegedly redicalized assassin Mevlut Mert Altintas, was part of law enforcement forces that provided security at least eight events attended by the Turkish President Recep Tayyip Erdogan since July 15. The newspaper also points out that just prior to the coup attempt on July 15, Altintas called in sick, and it remains unclear exactly what he was doing during that time when the conspirators were attempting to overthrow President Erdogan.