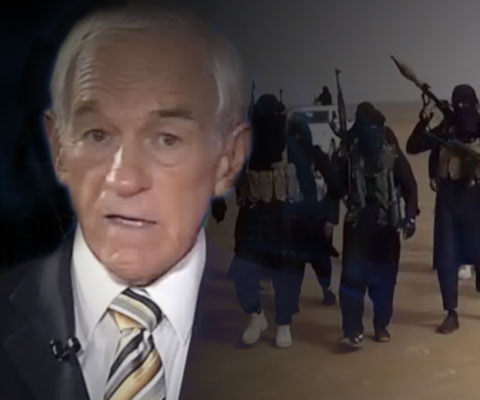 The deceptions of perpetual war have slowly but solidly come home to roost.

Most on the world stage are well aware of the farce that is the American War on Terror, yet few are willing to say so. Nevertheless, enough has come out to clearly show that with ISIS, the new terror prima donnas of the Middle East, the United States created its own enemies.

Former Congressman and presidential candidate Ron Paul appeared on the Alex Jones Show to discuss the latest developments in Syria.

Now that the U.S. has held firm on the CIA-backing of the “moderate rebels” who are opposing Assad, while Russia has commenced bombing “ISIS targets” which are known to the West as rebel holdouts, a veritable proxy war is underway.

Ron Paul told Alex Jones that the United States was “now al Qaeda’s Air Force,” with the hypocrisy of American foreign policy now more stark than ever before.

The interview is well worth checking out, as Dr. Paul is always a source of common sense in a confusing sea of lies.

It is a turning point in the drug out civil war in Syria that has Putin fighting under the banner of eradicating ISIS, and the U.S. under the banner giving cover for ISIS, al Qaeda, al Nusra and other terrorist groups fighting in the region.

And there appears to be little chance of NATO/American/Western forces changing their position. Worse, the conflict could spill out into direct warfare between Russian and the U.S., should accidental fire, clashing planes or misplaced egos set things off.

“Most of these people do not have the sophistication to make arms so they get the arms from other folks.”

“Right now ISIS has a billion dollars’ worth of U.S. Humvees, they have a billion dollars in cash they stole from us and they pay their soldiers with but they have anti-tank weapons and missiles they fire from the shoulder that were basically given to people in the Syrian civil war and taken by ISIS.”

“So really if we don’t want weapons to get into the hands of folks, we should be very careful about who we give the weapons to,”

Steve Watson reported on the comments from Rand Paul about the U.S. arming ISIS, now for several years:

The CIA has shipped weapons to al-Qaeda affiliated groups in Syria since at least 2012, a fact reported by The New York Times.

Up until late 2014, the US still claimed it was arming “moderate” mercenaries in Syria to fight against ISIS and the al-Assad government in Damascus despite the fact there are no longer any moderate forces active.