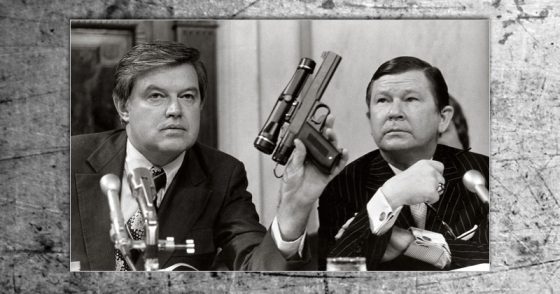 CNN keeps predicting Trump will die of a heart attack, which brings to mind the CIA poison dart gun that can trigger one.

Revealed by the Church Committee in 1975, the “heart attack gun” is a modified 1911 that can shoot a dart with a deadly poison that’s nearly undetectable – which is perfect for political assassinations.

“The poison was frozen into some sort of dart and then it was shot at very high speed into the person,” said CIA whistleblower Mary Embree. “When it reached the person it would melt inside them, and there would be a tiny red dot on their body, which was hard to detect.”

“There wouldn’t be a needle or anything like that left in the person.”

Then-CIA Director William Colby confirmed the gun could fire a special dart which “potentially would be able to enter the target without perception,” adding that an autopsy would fail to detect the dart’s poison.

Of course, the heart attack gun is 40-year-old technology, so it’s theoretically possible to now deliver heart attack-inducing toxins to someone without needing a dart.

But for Trump to suddenly die of a heart attack from “natural causes,” the public must be conditioned to believe he was at risk for one.

Conveniently enough, CNN now has this weird obsession with Trump’s “risk” of a heart attack:

According to the American Mirror:

Because of Trump’s calcium score, CNN predicted the president will have a “heart attack or heart disease” in “3-5 years.”

“So the president has heart disease,” he declared.

Why is the network making an armchair diagnosis that Trump suffers from “heart disease,” despite his recent physical indicating excellent health?