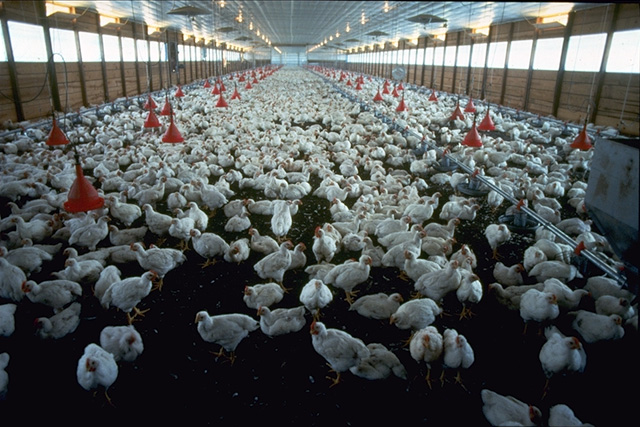 Editor’s Comment: Not only is our industrial food processed in unsanitary and inhuman ways, but the workers in the factories are also treated without respect and dignity. And all this is done in the name of efficiency and low prices. No wonder there is epidemic contamination in food from salmonella, E. coli and other pathogens; no wonder record food recalls are underway.

Something has to change; it should properly start with people waking up to what’s on the end of their fork. Raise your own, buy from responsible sources, and stop feeding the machine.

It represents the opposite indicator when it merely reflects the ownership interests of the oligarchs in a crony-capitalist, fascist economy that is picking away at the dying carcass of what little economic freedom still remains.  This is what a rising stock market actually represents today.  When people look at it they should understand it is merely a measure of the oligarchs getting wealthier and more powerful and you becoming more of a debt slave.  It represents their interests in multinational corporations with record profit margins because they refuse to pay their employees a living wage.  A rising stock market today is actually a leading indicator of the destruction of the middle class, cultural destitution and a society in collapse.

Eh, so what? It’s good for stocks.

Workers in plants run by the largest U.S. poultry producers are regularly being denied bathroom breaks and as a result some are reduced to wearing diapers while working on the processing line, Oxfam America said in a report Wednesday.

“It’s not just their dignity that suffers: they are in danger of serious health problems,” said Oxfam America, the U.S. arm of the U.K.-based global development group. The group works for a “just world without poverty” and focuses on topics ranging from refugees in Greece to malnutrition.

The report cited unnamed workers from Tyson Foods Inc., Pilgrim’s Pride Corp., Perdue Farms Inc. and Sanderson Farms Inc. who said that supervisors mock them, ignore requests and threaten punishment or firing. When they can go, they wait in long lines even though they are given limited time, sometimes 10 minutes, according to the report. Some workers have urinated or defecated themselves while working because they can’t hold on any longer, the report said. Some workers “restrict intake of liquids and fluids to dangerous degrees,” Oxfam said.

The conditions present difficulties, especially for menstruating or pregnant women, according to the latest report. Workers could also face medical problems, including urinary tract infections, and managers have told some workers to eat and drink less to avoid going to the bathroom, according to the report.

The Stock Market: Food Stamps for the 1%

Welcome to the Recovery – 1 Out of 7 Americans (45.5 Million) Remain on Food Stamps

The Oligarch Recovery – Renting in America is Most Expensive Ever