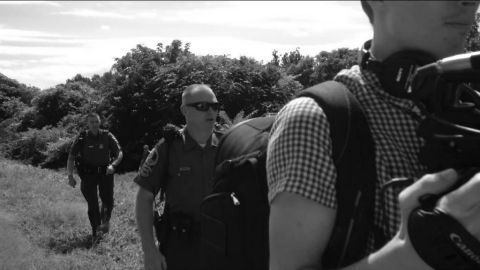 This article was written by Carey Wedler and originally published at The Anti-Media.

Editor’s Comment: Me thinks they protest too much. What would police have to hide at the crash site of the man caught on tape killing a reporter and cameraman that has inflamed the news? Is there something to hide, or something about this event that has to be so carefully managed that Virginia State Police would force a BBC journalist to delete his footage… particularly as the same officer noted that it was “evidence”?

Is there more going on with this event than meets the eye?

A Virginia State Police officer reportedly censored two BBC journalists following Wednesday’s tragic shooting that took the lives of Alison Parker and Adam Ward. After Vester Lee Flanagan (AKA Bryce Williams) opened fire at a local shopping center, killing the 24-year-old local reporter and the 27-year-old cameraman, he led police on a pursuit before he ran his vehicle off the highway and crashed. Police found him suffering from a self-inflicted gunshot wound. Flanagan was transported to a nearby hospital, where he later died.

BBC journalists Franz Strasser and Tara McKelvey were reporting from the scene of the crash when one of the officers approached the pair and ordered them to delete their footage. “Just at the scene of the suspects [sic] shooting on I-66. Police told me to delete footage or lose camera,” Strasser tweeted. “Reason for confiscating camera was that it was evidence. Threatened to tow the car because it was illegally parked,” he said in a follow-up tweet about an hour later.

Beyond the officer’s reliance on petty parking regulations to threaten the journalists, Strasser’s claims — if true — suggest an inherent contradiction in his demands. If the camera needed to be confiscated because it contained evidence, why would the officers insist that exact same evidence be deleted?

In another tweet, Strasser said the only footage left was unusable iPhone evidence. Still, he said they “…were able to recover photos from the moment police asked us to delete crime scene footage.” “We are working on recovering the video file. Haven’t touched SD card so there’s a small chance,” he added. The reporter also clarified in a picture tweet that of the multiple officers present, there was only one who insisted they destroy their footage.

“One officer in particular (not pictured in any of these images) closed the trunk when I tried to put my camera bag in and said our car would be towed for being illegally parked and my camera seized for containing evidence. He then reversed course and wanted to watch me delete the footage I had gotten,” Strasser posted on his Facebook, along with pictures of the incident.

It is unclear why police would take issue with documentation of their investigation of the scene, however, there has been similar police censorship in the state in the past. Last year, Norfolk police reportedly assaulted a 19-year-old man for filming their interaction with his friend. The ACLU of Virginia has said that filming police is entirely legal as long as the person recording does not interfere with officer duties. The ACLU’s Virginia chapter also says that in the state, “…wiretapping law does not require all-party consent when recording another person or persons. Also videotaping is only illegal if done in a place where the person being filmed has a reasonable expectation of privacy.” Virginia’s ACLU claims there have been instances of police censorship in the state, nonetheless.

The National Press Photographer’s Association has requested a formal investigation of the Wednesday incident. Corrine Geller, a representative for the Virginia State Police, says it is investigating the incident. In a tweet to Strasser, she said, “VSP is aware of this incident and we are looking into it, as such actions violate VSP policy.” In a separate Tweet, Strasser wrote, “But why they are then okay with deleting ‘evidence’ makes one question their reasoning,” highlighting a vital concern in the VSP officer’s attitude and actions against the journalists.

Just at the scene of the suspects shooting on I-66. Police told me to delete footage or lose camera.

Reason for confiscating camera was that it was evidence. Threatened to tow the car because it was illegally parked.

But why they are then okay with deleting ‘evidence’ makes one question their reasoning.

Neither of these VA state police officers were the one asking us to delete footage. It was mainly one officer. pic.twitter.com/6L0JhTBWPm

This article was written by Carey Wedler and originally published at The Anti-Media.

Carey Wedler joined Anti-Media as an independent journalist in September of 2014. As a senior editor, her topics of interest include the police and warfare states, the Drug War, the relevance of history to current problems and solutions, and positive developments that drive humanity forward. She currently resides in Los Angeles, California, where she was born and raised. Learn more about Wedler here!