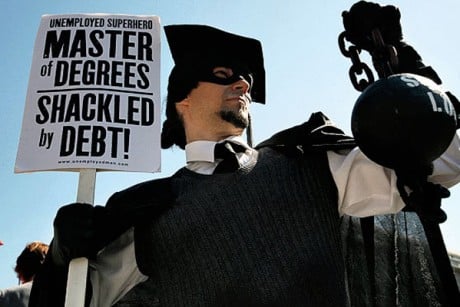 This article was written by Joshua Krause and first appeared on The Daily Sheeple.

Editor’s Note: Clearly, not only is there a massive bubble that could send shockwaves through the financial system, but there is such a tidal wave of debt that generations of Americans will be backwards with opportunity, as they struggle to finance their education at their expense of all our future. The average college educated head-of-household pays more monthly to student loans than groceries for a family! How and when will America ever regain a vibrant, prosperous and upwardly mobile middle class?

How Student Loan Debt Is Turning Us into Serfs

The Medieval era is well-known for being littered with feudal societies, ruled by royalty and served by serfs who kept the system running with back-breaking labor. Contrary to popular opinion though, the serfs weren’t exactly what we would call ‘slaves.’ They definitely had more rights and opportunities than many of their ancestors from the Roman Empire, and they weren’t owned by other people.

Instead, they were merely ‘tied down.’ They often didn’t have the freedom to move about, not because there were walls and watch towers keeping them penned up, but because they were beholden to the land. They had to pay part of their income if they wanted to stay on that land, and if they wanted any kind of protection.

And because their world was far more dangerous than ours, they desperately needed the protection of the lords and their soldiers, which meant that they couldn’t risk leaving their land for better opportunities. In most feudal societies, it wasn’t politics that kept the people down, it was their financial situation.

In much the same way that feudalism kept its people tied to the land for multiple generations, our current financial system is also producing a perpetual serf class; mainly through the issuance of student loans. Unlike most debts (of which we have plenty) there is no escaping these loans. In most cases, you don’t have the option to declare bankruptcy and start anew with a clean slate. As a result, many of our citizens are not only carrying heavy debts, they’re laying the groundwork for having indebted children as well.

Data analyzed exclusively by the AP, along with surveys about families and rising student-debt loads, show that:

• School loans increasingly belong to Americans over 40. This group accounts for 35% of education debt, up from 25% in 2004, according to the New York Federal Reserve. Contributing to this surge are longer repayment schedules, more midcareer workers returning to school, and additional borrowing for children’s education.

• Generation X adults — those 35 to 50 — owe about as much as people fresh out of college do. Student-loan balances average $20,000 for Generation X. Millennials, 34 and younger, have roughly the same average debt, according to a report by Pew Charitable Trusts.

• Gen X parents who carry student debt and have teenage children have struggled to save for their children’s educations. The average they have in college savings plans is just $4,000, compared with a $20,000 average for teenagers’ parents who aren’t still repaying their own school loans, Pew found. A result is that many of their children will need to borrow heavily for college or pursue cheaper alternatives, thereby perpetuating a cycle of family debt.

• Student debt is surpassing groceries as a primary expense for many borrowers, with the gap widening most for younger families. The average college-educated head of the household under 40 owes $404 a month in student debt payments, according to an AP analysis of Fed data. That’s slightly more than what the government says the average college-educated family spends at the supermarket.

There are now two separate debt cycles at work here. Ever since the government started issuing these loans and made them nearly impossible to default on, it has given the colleges an incentive to raise prices. And since these loans allowed more people to go to college, the marketplace is saturated with college grads, and their education quality is often watered down. This means that the average person now needs a higher education to set themselves apart from their peers, which of course costs more money. And on and on it goes.

And these massive debts have spawned another horrible cycle between parents and their children. It’s already incredibly difficult to start a family when you owe tens of thousands of dollars, but for those who do, they now have less money to save for their children’s education. Surely, their progeny will also be burdened with debt if they decide to follow their parent’s footsteps. Considering that around half of America’s college graduates are stuck in jobs that don’t require a college degree, that would probably be an awful mistake to make.

Our society is already populated by millions of people working menial jobs while burdened with absurd debts that will keep them ‘tied down’ for the rest of their lives. So there really isn’t much distance left between us and our medieval ancestors. The only thing that was missing from this situation, was the passing of these debts to our children. However, we’re no longer robbing our future progeny with these debts. Now it’s happening to our children in the present. Feudal America has officially arrived for those who are trying to improve their lot in life with a college education.

This article was written by Joshua Krause and first appeared on The Daily Sheeple.