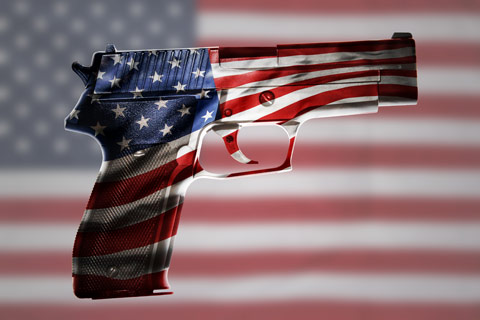 Is there any doubt left that Obama wants to completely destroy the right to keep and bear arms, and bind Americans to their own enslavement?

Reactionary gun control efforts following San Bernardino are combining undue hysteria over firearms and terrorism into one mis-aimed issue that stands to trample upon the American people – who are already the most surveilled and controlled.

Led by fear, most are prepared to sacrifice liberty and accept further measures in order to address the perceived threat from ISIS… but the bigger threat by far comes from the federal government itself.

[T]he no-fly list is a secret list that uses secret criteria to determine who finds a home on it. So if you link banning guns to the no-fly list, the scenario presented is completely feasible: The government could theoretically add anyone it wants to the no-fly list, even broad categories of people, and thereby prevent them from owning a gun.

Tim Sparapani is now principal of SPQR Strategies but was formerly senior legislative counsel for the American Civil Liberties Union. In that role, he became intimately familiar with the use of the no-fly list — or, anyway, as familiar as someone from outside of the government can be. Armed with that knowledge, he explained why using it as the basis for much of anything was iffy, much less banning gun purchases.

The problems are foreseeable and obvious:

“The problem with any kind of watch list,” Sparapani said, “is that it’s always going to be both under- and over-inclusive. It suffers on both accounts. It causes so many problems that it really leads us to question the worth of having a list like this.”

Not only can the draconian government database not protect everyone by knowing all the risks, but the government has carte blanche to label anyone as a potential terrorists, a threat, or simply flag the for further monitoring.

Obama’s proposal has been voiced before, including by his former White House Chief of Staff and the controversial embattled mayor of Chicago, Rahm Emanuel:

Even with the best intentions with a dangerous tool under one administration, there is every chance that the next administration would try to corral other groups under the label and deny them rights.

With Obama’s far-reaching gun control agenda, such a list could be a fail-proof method of taking everyone’s legal right to bear arms, at least at its extreme.

If the IRS were running the watchlist, they would likely fail at spotting terrorists, but every Tea Party conservative might find their closely guarded 2nd Amendment under attack.

It also violates 5th Amendment rights to due process, as the Washington Post notes:

Particularly when applied to the ability to own a firearm, many would argue that the no-fly list is a violation of the 5th Amendment, which guarantees the right to due process before people are deprived of life, liberty or property. During the ACLU’s lawsuit, the government admitted that people are added to the list speculatively, before they’ve actually done anything wrong. What’s more, the Guardian reported in 2014 that the list might be used by law enforcement as a pressure point against possible informants.

The list is itself almost necessarily a slippery slope. “There’s very little incentive for any particular government official to narrow the list,” Sparapani said. “It’s much easier to put more and more names on it.”

“Who are these people who are so dangerous that we can’t let them on planes, but we haven’t gone out and arrested them?” Sparapani asked. “At what point do we actually take action against them if they’re under what we think of as passive surveillance? … If they’re too dangerous to be put on a plane but not too dangerous for us to arrest them, what exactly is this list about?”

Asked another way: Who is too dangerous to be on a plane but not dangerous enough to walk around in public — and should that person be denied the right to own a firearm because they land somewhere in that gray space? President Obama’s goal was not really to keep the guns out of the hands of possible terrorists, in part because the overlap of the no-fly list and possible terrorists looks more like a Venn diagram than a circle. It was, instead, part of his effort to limit the availability of guns in general, using the no-fly list as a tool.

Someone like Trump might start with Muslims he fears threaten America, but might end up with the very dissenters who elected him to office. Just being added to the list would be enough to harass, inconvenience and violate every civil liberty that Americans once held hear – and practically no one has ever gotten off the terrorism watch list, despite many well known mix-ups and mistakes.

As Sen. Rand Paul noted, “someone who has guns, ammunition, seven days of food” could be considered a potential terrorist under Homeland Security policy. Not only could it happen, but someone could be barred from buying guns for owning guns in the first place. It all depends on the selective enforcement and abuse of the system.

Since the Bush Administration, hundreds of people have been falsely added to the terror list or prevented from flying because they share a last name, or a similar name, with another person who is merely suspected, but not actually accused of wrongdoing.

“It’s very, very common for individuals who have similar appearing names to be confused with people who are actually on the no-fly list,” said Barry Steinhardt, a New York-based lawyer who heads the American Civil Liberties Union’s Technology and Liberty Program.

“The lists are both so shrouded in secrecy and so large that inevitably innocent people are swept up as potential suspects or terrorists especially when you have lists that are maintained by intelligence agencies that have very little oversight,” he said.

The Bush administration has attempted to stem confusion caused by the existence of multiple watch lists by establishing a joint FBI-CIA Terrorist Threat Integration Center (TTIC), which consolidates more than a dozen previous lists, including the State Department’s TIPOFF database of more than 110,000 known and suspected terrorists.

Could it really happen here?

Obama seems bound and determined to undermine the 2nd Amendment in any and all ways he possibly can. How far is he willing to go before the end of his term?