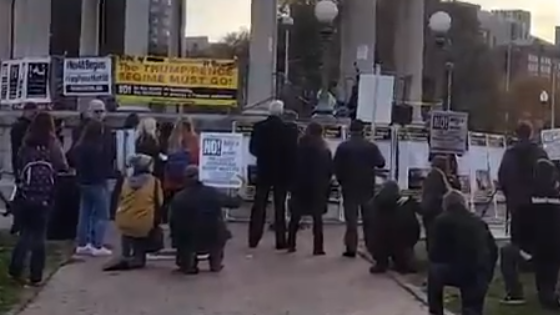 Despite widespread attention in the press, the “Refuse Fascism” multi-city Antifa plan to remove Trump from office has completely failed, with protests in most cities turning out under a hundred people who were at times outnumbered by Trump supporters that had shown up to counter what the Soros funded group had claimed to be millions of people intent on driving out the “fascist Trump/Pence regime.”

The group had spent an unknown amount of money promoting the protests, even going as far as to take out a full page ad in the New York Times. On top of that, they also received widespread attention in the mainstream media for the last week yet none of that apparently mattered when the time came to show up for the communist inspired revolution to take out the rightfully elected president.

A variety of videos of the protests across the country were posted throughout social media, most showing such a laughable turnout that one news outlet led with the headline “ANTIFAIL.”

Reports of violence were also surprising low, with the only notable exception being a women arrested for throwing her drink on a Trump supporter in New York City.

In Boston a Trump supporter posted footage of what looks to be a couple dozen people planning Trump’s demise.

Protests in Chicago were also relatively small and not even close to what the groups behind them had hoped for.

As Breitbart noted, protests in the Antifa “stronghold” of Seattle were also surprisingly small.

“One protester in Seattle turned up with a Soviet flag. I can only assume that the New York Times, the Washington Post and CNN, all of which hate murderous totalitarian ideologies, will give it the same kind of coverage they devoted to the swastika at Charlottesville. That’s how it works, right?”

What looks to be the biggest protest happened in New York City with a couple hundred people showing up. (LOL)

NOW: “If you hate trump and Pence join us” pic.twitter.com/0QfMJG3var

Infowars.com covered multiple protests across the country with over 7 hours of footage showing the complete failure of the Soros funded anti-Trump protesters.

Owen Shroyer covered the protests from Austin City Hall and reported that, “It was nationwide, they spent millions of dollars on this, they bought a full page ad in The New York Times, today rolls around and its a dud!”