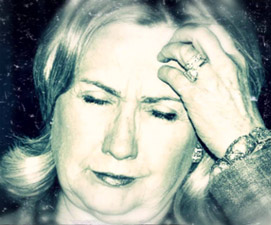 This article was written by Michael Snyder and originally published at the End of the American Dream.

Editor’s Comment: They can try to cover up her declining health and significant mental problems, but there is just no covering up the psychopathic tendencies – they run strong in her, and the whole country can see it plainly.

It is a matter of the Naked Emperor; everyone knows, and yet somehow she clings to power. Must be an important somebody’s errand gal. God help us.

Is Hillary Clinton healthy enough to serve as president if she wins the election? Over the past couple of weeks this has become a major issue, and the mainstream media is actively conspiring with the Clinton campaign in a desperate attempt to cover up the truth. For example, the Washington Post, which has essentially become a mouthpiece for the Clinton campaign at this point, has been publishing an article “debunking” claims about Clinton’s health almost every day recently.

One of their headlines that really caught my attention was “Don’t believe everything you read about Hillary Clinton’s health on Google”. By the way, there were three Hillary Clinton campaign ads on that one page alone. But CNN took things to an entirely new level this week when it published an article entitled “Clinton’s health is fine, but what about Trump?” I was so flabbergasted by that headline that my wife came into my office to see what all of the commotion was about. No, Hillary Clinton’s health is not “fine”, and we will get to that later in this article.

Despite the fact that Clinton opened up a jar of pickles that was supposedly sealed on Jimmy Kimmel Live the other night in a ridiculous attempt to prove that she was healthy, the facts keep coming out, and the more Americans talk about her health issues the more her poll numbers go down.

As I have previously documented, the mainstream media isn’t even pretending to be objective in this race, and they have shifted into panic mode as they try to stop the damage to their favored candidate. One writer for the New York Times even went so far as to suggest that search engines should manipulate the results that they show to the public to help hide Hillary Clinton’s health problems.

But these aren’t just rumors. Her extended coughing fits have become increasingly difficult to explain. Even worse for her campaign is the fact that she has gone into seizures while on camera. She has been falling down with alarming regularity, and she also has a huge unexplained hole in her tongue. Clinton should just be honest with the American people about all of these things.

And even though her personal doctor claims that she is in good health, he has also confirmed that Clinton has been diagnosed with hypothyroidism and is being treated with a drug known as Armour Thyroid…

The Internet is awash with rumors about Hillary Clinton’s health, but there is one medical condition she is actually known to have.

That is hypothyroidism, a condition affecting about 10 million Americans in which the thyroid is underactive, resulting in a variety of symptoms including fatigue, weakness and weight gain.

For most patients, the symptoms can be significantly reduced or eliminated with the use of hormone therapy. Clinton is being treated with a medication called Armour Thyroid, according to her doctor, who has issued a letter saying she’s in “excellent” physical condition and is fit to serve as president.

In addition, it has been documented that Clinton has taken the drugs Lovenox and Coumadin as well. The following comes from an excellent article on Clinton’s health by Bob Eschliman…

The Clinton campaign has frequently pointed to the July 28, 2015, letter from her personal physician, Dr. Lisa Bardack, in which she refers to the Democratic presidential nominee as being in “excellent health.” The report is supposedly based upon a May 21, 2015, examination, but, if you actually read the letter, the doctor notes Clinton has had a number of issues.

According to the letter, Clinton has been on anticoagulation medication since 1998, not since her 2012 fainting incident as has been widely reported. And, both of her parents had histories of cardiovascular issues—her father died of a stroke, and her mother died of congestive heart failure.

In addition, we can learn more facts about Clinton’s health from her personal emails which have been leaked to the public.

For example, a 2011 email chain discussed a condition known as “decision fatigue”…

Clinton sent an email to close confidante and advisor Cheryl D. Mills on August 19, 2011 featuring the text of an article entitled Do You Suffer From Decision Fatigue?

The article talks about how people in positions of power and influence can suffer from “decision fatigue” that causes them to be “low on mental energy” and prompts the sufferer to “become reckless” and “act impulsively”.

The article also explains how “decision fatigue” could explain why “ordinarily sensible people get angry at colleagues,” which is possibly a nod to Clinton’s infamous temper tantrums that have left her staffers in tears.

Considering how many important decisions a president must make each day, this is quite alarming.

In a subsequent email chain, Clinton was sent information about a drug that is used for “excessive sleepiness in patients with Parkinson’s, Alzheimer’s, and multiple sclerosis”…

In a separate email sent two months later, Hillary received information from her top foreign policy advisor Jacob Sullivan about a drug called Provigil (Modafinil), which is used to treat “excessive sleepiness in patients with Parkinson’s, Alzheimer’s, and multiple sclerosis,” as well as “excessive sleepiness caused by narcolepsy”.

And of course so much has already been said about the head injury Clinton suffered a number of years ago. But what most Americans do not know is that one of Clinton’s assistants actually reached out to the commissioner of the NFL to inquire about how to treat her “cracked head”… 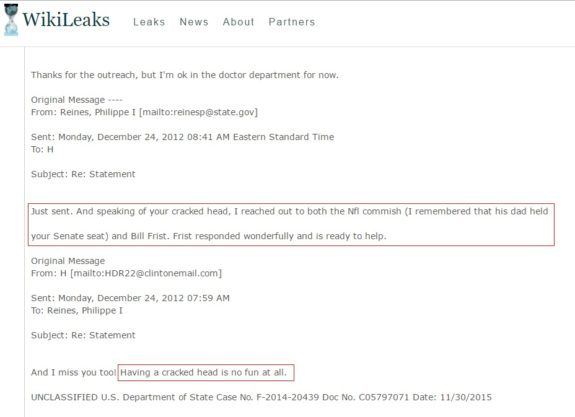 So what are we to make of all of this?

Are we supposed to ignore the facts that are laid out in these emails?

Just yesterday, CNN published an article entitled “The new birthers: Debunking the Hillary Clinton health conspiracy” that sought to demonize anyone that would dare to question Clinton’s health.

But meanwhile, reporters in the mainstream media continue to publish some of the most outrageous and ridiculous rumors imaginable about Donald Trump. They do this because they desperately want him to lose.

These days, one of the easiest ways to discredit a position is to label it a “conspiracy”, but the truth is that the pundits in the mainstream media are some of the biggest “conspiracy theorists” of them all.

There are legitimate questions about Hillary Clinton’s health, and the American people deserve the truth.

Unfortunately, they aren’t going to be getting it from the mainstream media.

This article was written by Michael Snyder and originally published at the End of the American Dream.

YouTube videos produced by Mark Dice and published on his channel.