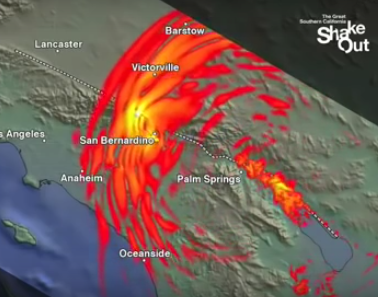 Any number of disaster scenarios would seemingly bring the U.S. to a grinding halt, and wreak untold havoc upon the vulnerable population.

Worse, there seems to be an uncomfortable sense that a major event like that is long overdue.

Surely one of the most devastating would be a major earthquake along the San Andreas fault line. For several years now, experts have warned that the stress levels have reached a dangerous threshold and that the “big one” could be coming to Southern California… any time now.

Scientists have issued a dire warning that Southern California and the Los Angeles area could be in the path of a major earthquake of 7.0 magnitude or greater.

In the worst case scenario, it could destroy the Los Angeles metro area and rupture hundreds of miles of land in Southern California. A 7.9 earthquake took place back in 1857.

The Los Angeles Times is now reporting that the San Andreas fault is “locked, loaded and ready to roll” – there is a clear and present danger:

Southern California’s section of the San Andreas fault is “locked, loaded and ready to roll,” a leading earthquake scientist said Wednesday at the National Earthquake Conference in Long Beach.

The San Andreas fault is one of California’s most dangerous, and is the state’s longest fault. Yet for Southern California, the last big earthquake to strike the southern San Andreas was in 1857, when a magnitude 7.9 earthquake ruptured an astonishing 185 miles between Monterey County and the San Gabriel Mountains near Los Angeles.

[…] “The springs on the San Andreas system have been wound very, very tight. And the southern San Andreas fault, in particular, looks like it’s locked, loaded and ready to go,” Jordan said in the opening keynote talk.

The devastating potential of the fault became clear with a 1857 temblor, which had an estimated magnitude of 7.9… The quake was so powerful that the soil liquefied, causing trees as far away as Stockton to sink. Trees were also uprooted west of Fort Tejon. The shaking lasted 1 to 3 minutes.

According to the leading scientists in the study of tectonic plates and movements, earthquakes must periodically relieve plate pressure (about 16 feet worth of movement every century), but that has not happened on the San Andreas fault during that time period – in fact, the event is overdue.

If they’re right, that makes disaster all but imminent in one of the most heavily populated areas in North America.

Here is a simulation of what could occur:

A 2008 U.S. Geological Survey report warned that a magnitude 7.8 earthquake on the southern San Andreas fault would cause more than 1,800 deaths, 50,000 injuries, $200 billion in damage and severe, long-lasting disruptions. Among the predicted problems: The sewer system could be out of commission for six months.

Additionally, a major, devastating quake would almost certainly interrupt transportation, shipments and commerce, perhaps for months on end. The lack of vital services (such as the sewer system, as noted above) could pose major issues to survival and the resumption of everyday life.

If you are unfortunate enough to live in Los Angeles, you may have some life issues to work out anyway, but… it would be wise to heed these warnings.

If you are caught in a major quake, it is important to avoid being trapped by collapsing buildings or flying debris. Here are some thoughts on surviving the aftermath.

The San Andreas fault is not the only troubling hotspot in the country – Old Faithful has been causing recent worry from Yellowstone, and the New Madrid fault line has DHS/FEMA concerned enough to run multi-agency nationwide drills simulating a major earthquake disaster. Meanwhile, the Ring of Fire has been causing devastation at flashpoints throughout the Pacific ring in many nations.

Yellowstone Eruption in 2016? Shocking New Video Shows What Is Really Going on at Yellowstone