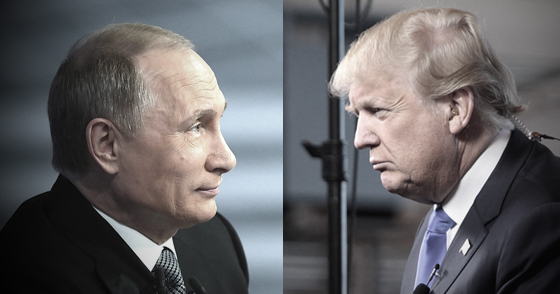 Editor’s Comment: Just when it seemed that cooler heads would prevail, and that death and destruction were less certain with new leadership, it seems that larger events are driving the new administration, and the reaction from Russia, back to a difficult and tense place. The world remains on the brink, and the powers that be have a larger agenda in the works – no one leader, cowboy or KGB boss alone can stop it. The “deep state” took out Gen. Flynn for his talk of repealing sanctions and establishment (more) friendly relations, and for fear of Trump’s boasts and attempts to do the same. And they will not stop there. Subterfuge, embedded deep government puppets, tools and operatives are all deep at work.

The larger war, the larger society build on fear and conflict, means big money, huge blocks of power, and a control over matters that elections alone could never undo, and no leader has yet unraveled or disintegrated.

It remains to be seen what will happen, and whether or not the petrodollar, oil prices or personal politics will spill over into violence, stalemate, or further escalation. But one thing is clear, there will be no straight shot deal – President Trump, his administration, and the rest of everyone in the game on both the American and Russian sides will have to very carefully weigh all options, and strive for the most beneficial and least destructive outcome. Meanwhile, a serious routing of moles, leakers and establishment lackeys needs to take place. If Trump doesn’t get them, they may get him, and Putin, all riled up.

If there is enough confusion, no one will later remember what non-sense stirred things up, but only that things reach a point of no return.

The Russian Love Affair With Donald Trump Sours As The U.S. And Russia Move Toward War

In recent months Donald Trump has been severely criticized by both Democrats and Republicans for not being sufficiently “anti-Russia”, but the truth is that the Trump administration has not been working hard enough to repair a relationship that is now souring very rapidly.  When Donald Trump won the election in November, the Russians celebrated tremendously, because they greatly preferred Trump over Hillary Clinton.  But just because Trump was victorious does not mean that our relationship with Russia will automatically improve.  Trump and Russian President Vladimir Putin both have huge egos, and it is quite easy to imagine a scenario in which things between them go very, very badly.

In fact, we may already be starting to see such a scenario play out.  As you will see below, under President Trump U.S. troops are being deployed to a very sensitive area of Poland, and they are also being sent to key areas of Bulgaria and Romania.  That is not sitting well with the Russian government, but they were much more upset when Trump insisted that Russia must give the Crimea back to Ukraine.  This is something that the Russians would never do, and they were quite stunned that Trump would even suggest such a thing.

On the flip side, the Pentagon was quite annoyed when Russian fighter jets buzzed a U.S. warship in the Black Sea just a few days ago, and when a Russian spy ship set up shop just off the coast of Connecticut recently, President Trump told Secretary of State Rex Tillerson that “the greatest thing I could do is shoot that ship that’s 30 miles off shore right out of the water”.

When I first heard about that quote I thought it might be “fake news”, but it was actually reported by ABC News and a whole host of other prominent news outlets.

I know that Trump doesn’t have much of a filter, and that is a good thing when he is dealing with the mainstream media, but it can be a very, very bad thing for foreign policy.

Look, you may think that it is a good idea to blow a Russian spy ship out of the water, but you never, ever say such a thing out loud.

In a few days, most of us living in the United States will completely forget what Trump said about that Russian spy ship, but over in Russia they will remember this quote forever.

This is just how the Russians operate – they never forget, and they never, ever forgive.

When you are dealing with Russia, you have got to be very, very careful.  Unfortunately, being cautious is not one of Trump’s strengths, and the wild optimism about Trump in Russia is now being replaced by disappointment and anger…

The new U.S. president has been in his role for just under a month, taking office in a transition that has been marked by chaos and missteps. And already, from the right of the political spectrum to the marginalized Russian left, a mixture of disappointment with the new U.S. president — who came into office promising to remake relations between the two countries — and a sense of vindication that Trump couldn’t be trusted after all has crept into Russian political chatter.

“Is Trump already out of fashion?” the independent Russian journal Russkaya Fabula asked on Wednesday — the same day that the Trump administration was dealing with the fallout stemming from revelations about National Security Advisor Mike Flynn’s conversations with the Russian ambassador. The site pointed to a small demonstration by hard-line nationalists this week, which picketed a major state-run news outlet and demanded the end of the “cult of Trump” in Russian media.

And in a sign of how far things have already deteriorated, Putin has ordered state media over in Russia to cut back on their coverage of Trump…

The Kremlin ordered state media to cut back on their fawning coverage of President Donald Trump, reflecting a growing concern among senior Russian officials that the new US administration will be less friendly than first thought, three people familiar with the matter said.

Just before Trump took office, Barack Obama aggressively moved U.S. troops toward the Russian border, and I highly criticized him for that.

So now that Trump is doing the exact same thing, I have to be critical of him as well.  Somebody needs to tell Trump that stationing 1,000 U.S. troops in northeastern Poland is not going to help our relationship with Putin…

The US Army’s Europe headquarters located in Wiesbaden, Germany announced late Saturday that 1,000 US troops and their vehicles would be sent to northeastern Poland at the end of March.

The unit – part of 4,000 US troops being deployed in rotation along NATO’s eastern flank  under its “Atlantic Resolve” mission – will be located at Orzysz.

That particular Polish city is less than 90 miles from the extremely sensitive Russian city of Kaliningrad.

If I was Trump, this is something that I would not have done.

At this point, the Russians are not quite sure what to make of Trump.  In fact, they have even gone so far as to prepare a “psychological dossier” on him to help Putin prepare for his first meeting with Trump…

A dossier on Donald Trump’s psychological makeup is being prepared for Russian President Vladimir Putin.

Among its preliminary conclusions is that the new American leader is a risk-taker who can be naïve, according to a senior Kremlin adviser.

Unfortunately, Trump tends to listen to those in his immediate vicinity, and in Washington he is surrounded by war hawks that absolutely hate Russia.  The following comes from Pat Buchanan…

The anti-Putin paranoia here is astonishing.

That he is a killer, a KGB thug, a murderer, is part of the daily rant of John McCain. At the Munich Security Conference this last weekend, Sen. Lindsey Graham promised, “2017 is going to be a year of kicking Russia in the a– in Congress.”

Members of Congress such as John McCain and Lindsey Graham are playing a very dangerous game.

It is okay to be critical of Russia, but if you are constantly making inflammatory statements all the time that is just going to push us toward war.

And as I explained in my latest book, we do not want a war with Russia.

So the Russians have been working very hard to upgrade their strategic nuclear arsenal, and at this point their arsenal is far superior to ours.  The following comes from an article that I came across earlier today…

Russia is constantly improving its nuclear deterrence and is very close to deploying new technologically-advanced intercontinental ballistic missiles which can defeat any US missile defense systems, a Russian deputy prime minister said in an interview.

“These weapons will soon appear in our armed forces,” Dmitry Rogozin told Rossiya-1 TV on Sunday. While not naming the new ICBM, the deputy PM in charge of the defense industry said the missile will have the capacity to penetrate any American air defenses.

“These weapons are able to clear the United States’ missile defense both of today and of tomorrow – and even of the day after tomorrow,” Rogozin said.

Meanwhile, the U.S. continues to rely on weapons systems that were developed in the 1960s and 1970s.

The Russians are a very dangerous foe, and it is in our national interest to try to have a positive relationship with them.

There are going to be times when we strongly disagree with what the Russians are doing, but our interactions with them should always be focused on trying to avoid a nuclear conflict.

So yes, we should let the Russians know when we are upset about something, but constantly making provocative and incendiary statements is a recipe for disaster.

Hopefully our leaders will start to realize this very soon, because right now our relationship with Russia is deteriorating very rapidly.