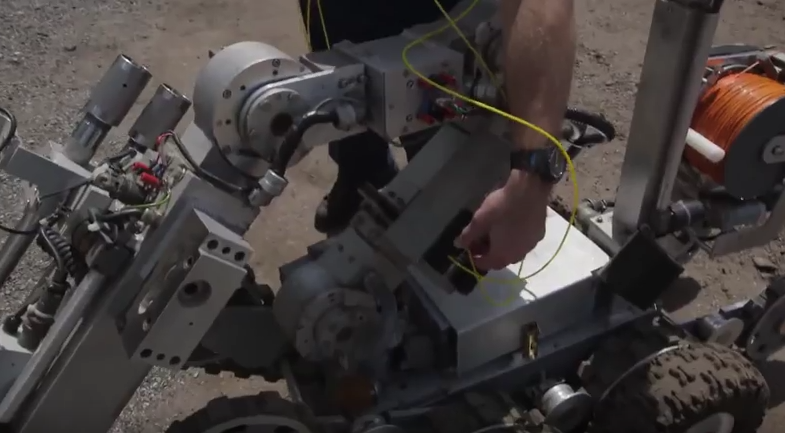 No doubt, the events in Dallas were profound and horrific.

The ambush sniper murder was vicious and carries heavy political significance for the heated debates over gun control, race, the police state and the larger era of turbulent change.

But the police response itself has already made history. Not just because the police killed the suspect (which is by now commonplace though certainly not justified in every situation) but because they are now using bombs to blow up the suspect.

Law enforcement and military personnel have long used robots to investigate or detonate suspected or known IEDs or explosives, and that isn’t necessarily without controversy but it isn’t often challenged.

But Dallas is the first known time that U.S. police officers have used a robot to kill their suspect.

And it is precedent:

As Kit Daniels of Infowars reported:

Fearing for their safety, Dallas Police used a robot to deliver a bomb to kill one of the killers after negotiations failed.

Police have used remote-controlled robots in hostage situations in the past, but this is likely the first case of police using a robot to kill a suspect domestically.

The justification is supposedly that police felt that they had no other options, but it would be difficult to know for sure.

“We cornered one suspect and we tried to negotiate for several hours. Negotiations broke down, we had an exchange of gunfire with the suspect [and] we saw no other option than to use our bomb robot and place a device on its extension for it to detonate where the suspect was… Other options would have exposed our officers to great danger.”

The prospect of killer police robots has now been officially unveiled, as well as that of armed drones.

Naturally, police felt justified in the midst of a chaotic and deadly shooting event where the suspect(s) were targeting police – there was a clear and present danger in the active shooter. But things have a way of accelerating, and it is foreseeable that lesser crimes could be met with such extreme force as well.

U.S. News & World Report raised the question of whether or not this use should be allowed, and it looks like there may be few challenges:

The novel use of deadly technology elicited immediate comparisons to targeted drone strikes overseas. But experts say it could well fit within existing legal frameworks for domestic law enforcement killings.

“One of the questions that inevitably will arise is the immediacy of the threat,” says David Jaros, a law professor at the University of Baltimore. “Obviously the more remote the suspect is and the less immediate the danger, the more difficult lethal force is to justify.”

“The main legal issue would involve inquiry whether there was excessive use of force, an inquiry tied to features of context and principles of necessity and proportionality,” he says. “For example, were there equally effective means of neutralizing a target?”

The deadly shooting of police officers may not lend itself to sympathy with the explosives-killed suspect. But hundreds of people die annually in confrontations with police, many heavily debated by the public, including two cases this week that reportedly inspired Johnson to shoot police.

Of course, an effect robot might also be deployed in this situation to simply capture the suspect alive, as his weapon would be useless against the robot even as the machine could knockout, cuff, taze, gas or otherwise restrain even a deadly killer in action.

So did they have to take out the killer, even as he was allegedly murdering cops?

There is still the question of why the suspect had to die.

“One can wonder why, if they could send in a teleoperated robot with C4 to kill the suspect,” [Keith Abney, a professor of ethics and emerging sciences at California Polytechnic State University, San Luis Obispo] told TIME, “why they couldn’t instead equip the robot with knockout gas or some other nonlethal agent to capture the suspect, instead of killing him.”

For criminal justice professor Gloria Browne-Marshall, this is the beginning of a civil war, where police regard citizens as a potential enemy, and much of the population believes the police represent a hostile and oppressive force, and act as an extension of a corrupt government state:

Gloria Browne-Marshall, an associate professor at John Jay College of Criminal Justice, said the incident was most concerning because of what it means for future cases: What are the parameters surrounding the use of such technology on civilian soil? “If we’re going to start using—as a country—this kind of drone technology and robots on a civilian population, then we’re easing into a civil war,” she told TIME. “We’re easing into one because we have civilians who believe that the government is not protecting them, and we have a government who believes that civilians are armed enough that they have to use military tactics.”

The successful use of a killing police robot hasn’t made anyone safer, but it has dramatically increased the power that the police state has at its disposal.

Will this technology ever be used to serve warrants, or conduct SWAT raids, with the robot serving instant lethal justice in the place of judge, jury and executioner? How much has already gone wrong here?

If the snipers who killed Dallas police officers acted out in a blowback scenario fueled by the number of unacceptable deaths at the hands of police (rather than the event being staged), then it is only to be expect that more events like the police shootings of Alton Sterling and Philando Castile, as well as assassinations of cops as a general group.

Things do not bode well for a country that is teetering over edge, and divided sharply against one another.

Civil War Erupts Between Black and Blue As Chaos Looms Over America: “The End Is Coming”