Editor’s Comment: Tourists –not suspected terrorists – will have to give their fingerprints to travel, shop and stay in Japan, making clear that the future will use your own body to control your actions in society. Control is the future, unless we avert it.

There is every attempt to force a global society into using biometrics to ID and complete all transactions. If they succeed, it is a society where rights will be abolished, every transaction is monitored and privacy is an insider’s joke about the past. Subsequently, the population will become completely dependent on the system for their livelihoods.

More Cashless Society: Japan to Force All Tourists to Use Fingerprints as Currency

Ever wanted to visit Japan?

Well be prepared to give your fingerprints as currency practically everywhere you go when you do.

According to fresh reports like this one out of Japan News:

Starting this summer, the government will test a system in which foreign tourists will be able to verify their identities and buy things at stores using only their fingerprints.

The government hopes to increase the number of foreign tourists by using the system to prevent crime and relieve users from the necessity of carrying cash or credit cards. It aims to realize the system by the 2020 Tokyo Olympic and Paralympic Games.

The experiment will have inbound tourists register their fingerprints and other data, such as credit card information, at airports and elsewhere. 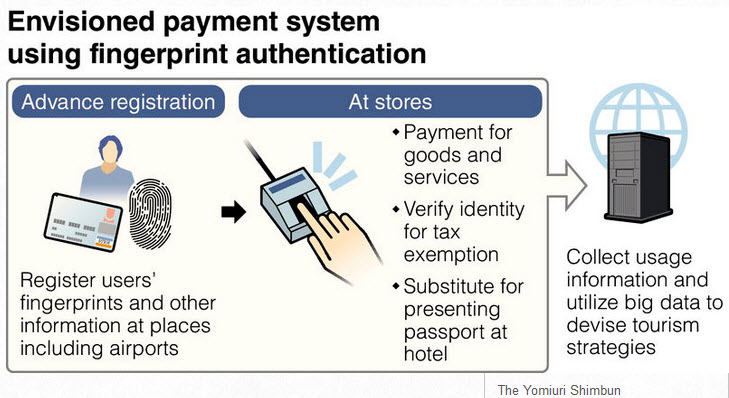 Some banks, like the Aeon Bank, already forgo ATM cards for fingerprints in Japan.

Now everywhere a tourist could spend money, from the hotels they sleep in to the stores they buy stuff in, will come equipped with a special device that will require them to place two fingers on a pad and have their fingerprint scanned and verified as if they are a criminal in order just to buy something.

The data, managed by the government, will be converted to “anonymous big data” to “devise policies on tourism”.

The government hopes “the experiment,” which will start in 300 hotels and shops, will be successful and spread across the entire country by 2020 when people from all over the world will be visiting Japan for the Olympics.

Cashless Control Grid: 25% of Australians Would Get a Chip Implanted in Them to Pay for Stuff

Here It Comes: Denmark Moving to a Totally Cashless Society

Melissa Dykes is a writer, researcher, and analyst for The Daily Sheeple and a co-creator of Truthstream Media with Aaron Dykes, a site that offers teleprompter-free, unscripted analysis of The Matrix we find ourselves living in. Melissa also co-founded Nutritional Anarchy with Daisy Luther of The Organic Prepper, a site focused on resistance through food self-sufficiency. Wake the flock up!