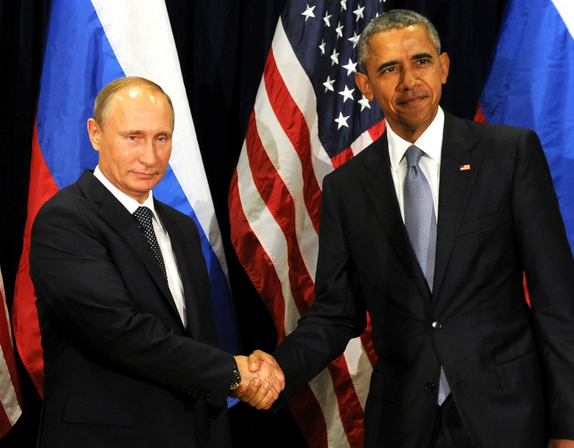 Editor’s Comment: Putin is once again calling Obama’s bluff, as the U.S. intelligence community and its misleaders in Washington have amplified the bogus narrative that Russian hacking was behind the election upset – that ultimately denied Hillary the presidency and destroyed her image to voters as scandals after scandal came out.

Now, Washington is desperate to defend the Empire, even in the face of blustering lies, and use the phony hacking claims to kill several birds with one stone – first, they can clamp down on dissent and have a great B.S. excuse to shut down bloggers and alternative journalists. Second, U.S. hawks get to prod at Russia once again, and stoke even more tensions, in the hopes that wider war and perpetual conflict will be the inevitable results.

Finally, they get to use the whole invented affair to make excuses for the resounding defeat of the establishment, and the populist rejection of all their control measures. The decline of the mainstream media, too, can be attributed to “fake news,” planted stories and hacker-based (Russian) intel. Never mind if it doesn’t make sense; never mind if the facts are loose or altogether missing. Never mind that U.S. foreign policy is filled with lies and propaganda on a daily basis, or the fact that the media blatantly regurgitates talking points for their favorite candidates.

The point is, to go on the offensive over nothing, and then create a diversion when too many questions get asked, and threaten a good phony election hacking narrative. Only, they’d better be careful how they treat Putin, and other uncaged bears. These are reckless children at play, nothing more.

Putin Lashes Out At Obama: “Show Some Proof Or Shut Up”

Putin has had enough of the relentless barrage of US accusations that he, personally, “hacked the US presidential election.”

The Russian president’s spokesman, Dmitry Peskov, said on Friday that the US must either stop accusing Russia of meddling in its elections or prove it. Peskov said it was “indecent” of the United States to “groundlessly” accuse Russia of intervention in its elections.

“You need to either stop talking about it, or finally show some kind of proof. Otherwise it just looks very indecent”, Peskov told Reporters in Tokyo where Putin is meeting with Japan PM Abe, responding to the latest accusations that Russia was responsible for hacker attacks.

Peskov also warned that Obama’s threat to “retaliate” to the alleged Russian hack is “against both American and international law”, hinting at open-ended escalation should Obama take the podium today at 2:15pm to officially launch cyberwar against Russia.

Previously, on Thursday, Peskov told the AP the report was “laughable nonsense“, while Russian foreign ministry spox Maria Zakharova accused “Western media” of being a “shill” and a “mouthpiece of various power groups”, and added that “it’s not the general public who’s being manipulated,” Zakharova said. “the general public nowadays can distinguish the truth. It’s the mass media that is manipulating themselves.”

The report cited U.S. intelligence officials that now believe with a “high level of confidence” that Putin became personally involved in a secret campaign to influence the outcome of the U.S. presidential election. “I think this is just silly, and the futility of the attempt to convince somebody of this is absolutely obvious,” Lavrov added, according to the news outlet.

As a reminder, last night Obama vowed retaliatory action against Russia for its meddling in the US presidential election last month.  “I think there is no doubt that when any foreign government tries to impact the integrity of our elections that we need to take action and we will at a time and place of our own choosing,” Obama told National Public Radio.

US intelligence agencies in October pinned blame on Russia for election-related hacking. At the time, the White House vowed a “proportional response” to the cyberactivity, though declined to preview what that response might entail. Meanwhile, both President-elect Donald Trump, the FBI, and the ODNI have dismissed the CIA’s intelligence community’s assessment, for the the same reason Putin finally lashed out at Obama: there is no proof.

That, however, has never stopped the US from escalating a geopolitical conflict to the point of war, or beyond, so pay close attention to what Obama says this afternoon.

According to an NBC report, a team of analysts at Eurasia Group said in a note on Friday that they believe the outgoing administration is likely to take action which could result in a significant barrier for Trump’s team once he takes office in January.

“It is unlikely that U.S. intelligence reports will change Trump’s intention to initiate a rapprochement with Moscow, but the congressional response following its own investigations could obstruct the new administration’s effort,” Eurasia Group analysts added.

At the same time, Wikileaks offered its “validation” services, tweeting that “Obama should submit any Putin documents to WikiLeaks to be authenticated to our standards if he wants them to be seen as credible.”

Obama should submit any Putin documents to WikiLeaks to be authenticated to our standards if he wants them to be seen as credible.

We doubt Obama would take the whistleblower organization on its offer, even if he did have any Putin documents to authenticate.