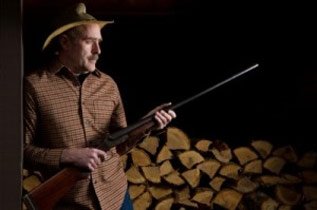 Editor’s Note: This article has been generously contributed by Glen Tate of 299Days.com. Glen is the author of the 10-part series 299 Days, which is inspired by his own life and personal journey. It begins with 299 Days: The Preparation and introduces us to a husband who awakens to the fragility of modern society and embarks on a personal journey that introduces him to a world of self-reliance and liberation.

In the following article Glen covers an issue that is very dear to most preppers – what to do when neighbors, friends and family come knocking. With limited resources available we’re all going to have to make tough decisions. Like many of us, Glen plans on helping those truly in need. But what about those who refused to see the warning signs and stuck their head in the sand, perhaps even lambasted you for your extreme ideas and theories? Instead of being frugal and preparing, they focused their efforts on entertainment and good times.

But when the good times end, they will come to you for help. What will you do when they show up at your front door?

(This post is something you can send to your friends or print out and hand to them when SHTF.)

I love my friends, but I will shoot you if I have to.  I’m serious.  Here’s why.

I tried to persuade you to prepare for what’s coming and, in the process, revealed that to you that I’m preparing.  You realized that I have food, guns, etc., and ended up saying, half kidding but half serious, “I’ll come to your place when SHTF.”

No you won’t.  I will shoot you.  If you threaten me and my family, I will use force to defend against any threat.  And showing up at my place hungry and unprepared is a threat to me.  You will eat my food and use up my medical supplies, generator, firewood, etc.  That’s less of these life-saving things for me and my family.  That’s a threat.

But what did you do?  You spent the weekends watching football, went on expensive vacations, and never made your spouse mad at you with your “crazy” ideas that something bad was happening.  You didn’t do shit because… you would just come to my place.  Problem solved, right?  You didn’t need to spend time, money, and create domestic strife because I did that all for you.

Not.  Why should I spend my time, money, and stress just so you can waltz into my place and live happily ever after?  I’m a nice guy, but – really? – I’m going to spend my (very limited) free time, disposable income, and domestic tranquility just so you can have a leisurely life and more material comforts pre-Collapse while I don’t?

Why do you think I will sacrifice enormous amounts of my time and money so you can enjoy yourself while I’m slaving away?  Would you assume you could come over and leave your broken car at my house?  That I would just spend thousands of dollars on parts and several weekends fixing it and then hand it over to you with a smile – just because I’m a “good guy”?  Would anyone expect that?

You do, apparently.  You actually expect to waltz over to my cabin and receive – with a smile – thousands of dollars of food and other supplies that took me all my weekends to acquire and store.

So, my grasshopper friend (as in the story of the grasshopper and the ant), here is your official warning: if your “plan” for your and your family’s safety is to come to my place, you’re wrong.  When you show up, I’ll ask you to leave.  When you don’t, I’ll point a gun in your face.  If you refuse to leave, I will shoot you.  You are a threat to me.

You had years of time and very clear warnings to get ready.  But you didn’t.  Hey, I love football but haven’t been able to watch a game in a few years; I’ve been fixing up the cabin, buying supplies, and training with the Team.  I spent a lot of money doing all these things so I haven’t gone on a long vacation in… forever.  I have had several difficult times with my wife because of all the prepping I’m doing; I could have easily done what you did, which is just say “Yes, dear” and not prepare because she didn’t want you to.

I hope this message jolted you.  There’s still some time.  Go prep.  Please understand that your plan cannot be “I’ll come to your place.”  I don’t want to shoot you.

Glen Tate” (not his real name) is a lawyer and political person in Olympia, the state capitol of Washington State.  He was a secret prepper, hiding his activities from his wife – and he wrote the ten-book 299 Days series in secret, too.

Glen has led an amazing life – and one that took a surprising turn. He grew up poor in the rural logging town of Forks, Washington. He worked hard to become a successful professional with a job in the political arena. Thinking he’d finally made it and everything was great, he was stunned to see how corrupt government is. From his observations at his job, he realized that America is collapsing and bad things are coming. Very soon. He began to prepare for him and his family to make it through the civil unrest of the coming collapse. That meant he had to return to his rural roots – quite a shock to his family and friends. Even more amazing was that he wrote down what he foresees happening during the collapse and it became a ten-book novel series published by Prepper Press.

The 299 Days series is available in Audio Book Format, as well as print and Kindle.

You can visit Glen’s web site at 299days.com