Hillary Has Been Chosen For More War “Right and Left in Lock-Step, Rubbing Their Hands” 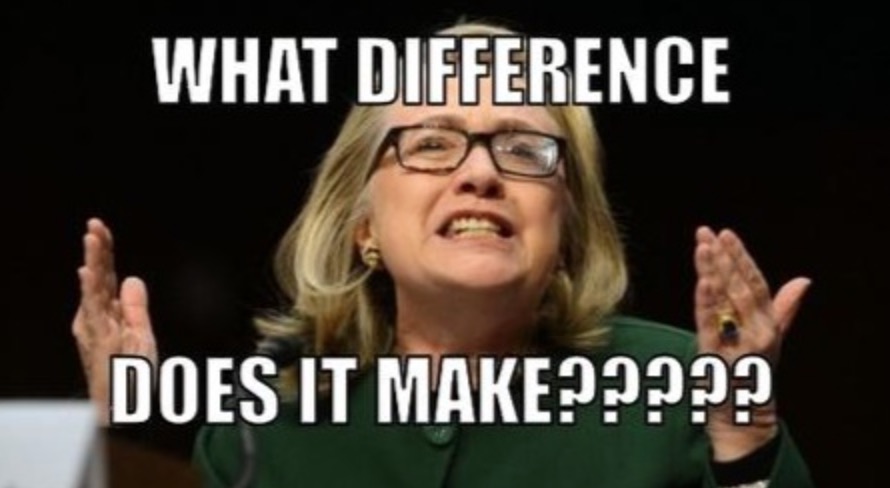 This article was written by Justin Gardner and originally published at The Free Thought Project.

Editor’s Comment: The establishment have gone overboard in trying to convince people that Hillary is the only adult on stage, despite her temper tantrums, extremely corrupt behavior and cavalier attitude towards everyone else. Her personality is not only that of a congenital liar, but of a psychopath who, as president, would think nothing of sacrificing lives for ‘progress.’ It didn’t make any difference to her as secretary of state. Though it was hardly noticed, Hillary’s State Department carried out regime change operations throughout the middle east – not just Gaddafi.  During the so-called Arab Spring “uprisings” (which were launched via astroturf operations connected to State Dept., Google and Soros Foundation), a great number of countries were upended and several leaders were ousted, as Wikipedia summarizes:

By the end of February 2012, rulers had been forced from power in Tunisia, Egypt, Libya, and Yemen; civil uprisings had erupted in Bahrain and Syria; major protests had broken out in Algeria, Iraq, Jordan, Kuwait, Morocco, and Sudan…

All this is a small taste of what Hillary would do as president. She has already done a lot of damage. Libya and Gaddafi was no small thing, and she laughed at his death. Syria is becoming a larger problem with each passing day, and despite straightforward threats from Russia not to attack his ally in Assad’s regime, the U.S. not only continues to support its ‘enemy’ ISIS/al Nusra/aka ‘Free Syrian Army,’ but is now attacking Syrian forces directly.

This is an insane recipe for disaster, and just they way the neocon shadow advisors want it. They are about to fill up Hillary’s cabinet positions, and take over policy just as they did under George W. Bush, only we’re approaching the dark tomes of the latter acts of global destruction. With Syria under siege, the game leads next to Iran and Russia itself. The insane psychopaths are willing to play with matches, and care nothing about the American people, or the people who will be afflicted in the theaters of war.

With two weeks left to go in the presidential race, the Washington establishment is falling all over itself pushing the inevitability of a Clinton win. It couldn’t have happened without the help of a fawning mainstream media, who first shoved Bernie Sanders to the fringe and then heaped attention on the lunacy of Donald Trump.

The silver lining in this absurd election is that WikiLeaks has revolutionized our understanding of those who seek to run government. It has exposed Hillary Clinton as a willing and eager establishment-corporatist shill, colluding with media to drive the narrative.

The subservience to Wall St. is exactly the kind of continuation that Washington seeks. As such, the military-industrial complex will be served well under Hillary Clinton, as they have been for many presidents before.

As the public grows tired of Afghanistan and Iraq, a fresh anxiety must be created in the American populace – all under the umbrella of a never-ending war on terror. Syria has long been on the regime change list, so the U.S. began nurturing the Salafist fundamentalist sect in Syria, which became a major part of ISIS.

The situation in Syria has also allowed the U.S. to escalate tensions with nuclear-armed Russia, hearkening to the Cold War days which were so profitable for the military-industrial complex.

Robert Parry, who broke the Iran-Contra scandal wide open in the 1980s, describes how the right and left establishment are in “lock-step” like never before, preparing for a Clinton presidency that promises more profitable conflict.

As polls show Hillary Clinton closing in on victory, Official Washington’s neoconservative (and liberal-hawk) foreign policy establishment is rubbing its hands in anticipation of more war and more strife, including a U.S. military escalation in Syria, a take-down of Iran, and a showdown with nuclear-armed Russia.What is perhaps most alarming about this new “group think” is that there doesn’t appear to be any significant resistance to the expectation that President Hillary Clinton will unleash these neocon/liberal-hawk forces of intervention that President Barack Obama has somewhat restrained.

While Obama certainly did his share to advance death and destruction – continuing the Iraq and Afghanistan occupations, ramping up the drone war, adding three countries to the list of bombing campaigns, deploying Special Ops to 70% of the entire world, and assassinating a U.S. citizen – the Washington foreign policy elite are giddy about returning to the Bush-Cheney flavor of war-making.

As Parry notes: “Virtually the entire mainstream U.S. media (and much of the progressive media) are onboard for a U.S. ‘regime change’ operation in Syria and for getting tough with Russian President Vladimir Putin.”

Combine this with the “the most skilled propagandists in the world” operating from Washington’s think-tanks – who almost universally support Clinton “because she has signaled a return to neocon/liberal-hawk strategies” – and the challenge to antiwar dissenters is monumental.

One of Albright’s partners on the Atlantic Council’s report, Bush’s last National Security Advisor Stephen Hadley, added that if Assad continues to bomb civilians, the United States should strongly consider “using standoff weapons, like cruise missiles, to neutralize his air force so that he cannot fly.”

The plans call for “safe zones” where Syrian rebels can base themselves behind U.S. military protection, allowing them to strike Syrian government forces but preventing the Syrian government from striking back. Little attention is paid to the fact that the so-called “moderate” rebels have refused to separate themselves from Al Qaeda’s forces who are in command of the rebel movement in east Aleppo and other urban areas.

There’s the familiar story of American hegemony creating terrorism in the Mideast, and then there’s the potential for much bigger conflict due to the presence of Russian forces invited into Syria by Assad. The Obama administration has already begun provoking Russia, and this is sure to continue – and likely increase – under Clinton.

Clinton recently claimed that any “no-fly zone” would be negotiated with Syria and Russia, in the interest of helping innocent civilians as the U.S. purportedly battles ISIS. Of course, such a deal is highly unlikely, as the Syrians and Russians know “it would amount to inviting the U.S. or NATO military to establish a beachhead inside Syria from which rebels, terrorists and other insurgents could operate beyond the reach of military retaliation.”

Parry laments that no antiwar opposition exists like it did in the run-up to the Iraq invasion. Obama has done a masterful job at co-opting what was left of the antiwar sentiment in the Democratic party into the foreign policy establishment war machine.

But it is not just the Republican neocons and old Democratic hawks who are determined to whip the American people into line behind more war. As [Greg] Jaffe wrote, “A similar sentiment animates the left-leaning Center for American Progress’s report, which calls for more military action to counter Iranian aggression, more dialogue with the United States’ Arab allies and more support for economic and human rights reform in the region.”

These “liberal hawks” are enthused that now almost the entire foreign policy elite of Official Washington is singing from the same sheet of martial music. There is none of the discord that surrounded Bush’s war in Iraq last decade.

As the war-hungry establishment gets ready to put its newest figurehead in place, it comes at a time when civil liberties have been dismantled to the point where a former Army major says “everything’s in place” for antiwar dissenters to be rounded up for military detention.

The 2016 election may turn out to be the clearest indicator yet that democracy provides no check on government’s abuse of power.

This article was written by Justin Gardner and originally published at The Free Thought Project.