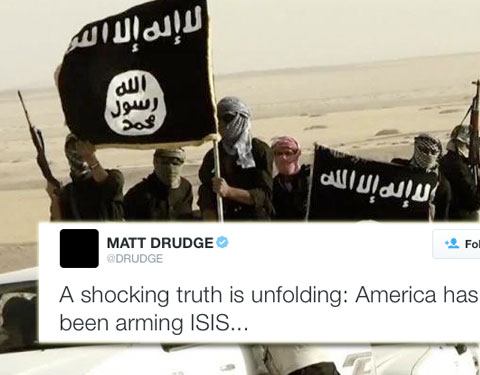 Editor’s Comment: The absurdity is overwhelming. There’s no square deal or honest dealing in the region, yet we are supposed to get outraged about the actions of the man who is officially in power there – even if it means the U.S. is tacitly backing actual al Qaeda terrorists, along with the al Nusra front, whatever is left of the so-called “rebels” who’ve now been largely defeated militarily by the Russian/Syrian forces.

It is outrageous the pack of unbelievable lies that are to make up the current pretext for war, and the motivations for intervention there. The corporate interests and conflicts of interest are blatant and in your face. And yet the drums march ever onward…

Jacob Jeremiah Sullivan is an American policymaker and a senior policy advisor to Hillary Clinton’s 2016 election campaign, who’s been seemingly attached to Clinton’s hip for nearly a decade.

He also served as the Director of Policy Planning at the U.S. Department of State, and as Deputy Chief of Staff to U.S. Secretary of State Hillary Clinton. He was deputy policy director for Hillary Clinton’s 2008 presidential primary campaign and a member of the debate preparation team for Barack Obama’s general election campaign.

For all intents and purposes, it is safe to call Sullivan a well-connected D.C. insider.

Now, according to a recently discovered email from WikiLeaks, he knew the US was working alongside Al-Qaeda in Syria — and, by proxy, so did then-Secretary of State, Hillary Clinton.

While it may come as no surprise, to those who’ve been paying attention, that the US has been arming and supporting terrorists in Syria, this email, confirming Clinton’s knowledge of it prior to Obama’s ‘red line’ in 2013, is nothing short of bombshell.

While the United States admittedly gave supplies to the ‘rebels’ as early as 2011, these supplies were all non-lethal, meaning they came in the form of food, trucks, and other rations. However, through covert lines, the CIA quickly began to dump cash, weapons, and eventually heavy artillery into the hands of the ‘moderate rebels’ over the course of the next few years.

What this email shows is that the US knew Al-Qaeda leader al-Zawahiri called on Muslims in Turkey and the Middle East to aid the rebels in the Free Syrian Army. From this day forward, the lines between who Al-Qaeda or the ‘rebels’ actually were — became heavily blurred. But, according to the email, the state department did not care as they knew Al-Qaeda was on their side.

As the email states:

UNCLASSIFIED U.S. Department of State Case No. F-2014-20439 Doc No. C05789138 Date: 10/30/2015 AL-ZAWAHIRI URGES MUSLIM SUPPORT FOR OPPOSITION (U) Al-Qaida leader al-Zawahiri called on Muslims in Turkey and the Middle East to aid rebel forces in their fight against supporters of Syrian President Asad in an interne video recording. Al-Zawahiri also urged the Syrian people not to rely on the AL, Turkey, or the United States for assistance.euters)

Once this wire went out to multiple departments in the form of an Ops Alert, apparently there may have been some original concern about Al-Qaeda joining the ranks of the US-supported rebels — which were being used by the American Deep State to destabilize Syria on behalf of special interests. However, Sullivan quickly replied to his master, Hillary Clinton, to let her know that Al-Qaeda “is on our side in Syria.” This email adds credence to the claims of Rep. Tulsi Gabbard — who was forced to take action to stop the US/ISIS collusion in Syria — by proposing a bill to “Stop Arming the Terrorists.” Last month, Gabbard called on President Trump to “end the regime change in Syria,” adding that this is what is causing the refugee crisis. While some were hopeful that Trump may comply, after last week, all hope was lost.

“For years, our government has been providing both direct and indirect support to these armed militant groups, who are working directly with or under the command of terrorist groups like Al-Qaeda and ISIS, all in their effort and fight to overthrow the Syrian government,” Gabbard said in an interview last month.

Shortly after Gabbard proposed this monumental legislation, she received bipartisan support from Sen. Rand Paul. Paul, a Republican, and Gabbard, a Democrat, have symbolically joined hands in calling on the federal government to be more accountable with how and to whom it gives money and material support.

The S. 532, the Stop Arming Terrorists Act, “Makes it illegal for any U.S. federal government funds to be used to provide assistance covered in the bill, including weapons, munitions, weapons platforms, intelligence, logistics, training, and cash, to terrorists.”

Going further, the bill, “Prohibits the U.S. government from providing such assistance covered in the bill to any nation that has given or continues to give such support to terrorists.”

Whether or not this bill will actually pass, or whether or not Trump will veto it after its passage, remains a mystery.

However, thanks to WikiLeaks, US citizens now have a far clearer picture of what is going on, and who exactly, is supporting whom in Syria.