GOP Concedes: Trump WILL BE The Nominee… “We’re Going After Hillary Clinton” 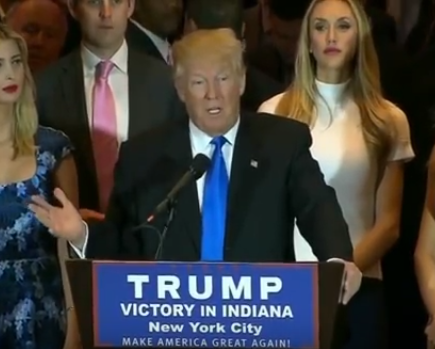 It is a bombshell moment in this bizarre 2016 election, as Trump now has enough momentum to convince even the GOP establishment to get behind him.

Indiana proved to be the decisive victory for Donald Trump in the GOP primary contest. Ted Cruz, who teamed up with Carly Fiorina as a last ditch effort to save his campaign, was forced to acknowledge bitter defeat – ending his campaign last night. John Kasich is apparently staying in the race for the time being. NBC News reports:

In a result that once seemed unthinkable to many Republicans, Donald Trump became the likely GOP nominee on Tuesday as top rival Senator Ted Cruz withdrew from the race.

Trump is not only on path to win the delegates he needs to win the Republican party’s presidential nomination outright, but he has forced a reluctant establishment base to back him against the larger enemy… Hillary.

Donald Trump gave a victory speech tonight in a tone that reflected the de facto end of the primaries and a focus on the new opponent.

In response to the Indiana primary results, GOP chairman Reince Priebus tweeted “Donald Trump will be presumptive nominee, we all need to unite and focus on defeating Hillary Clinton,” sending a shockingly swift sign of support from the very party that openly conspired to bring him down:

.@realDonaldTrump will be presumptive @GOP nominee, we all need to unite and focus on defeating @HillaryClinton #NeverClinton

The tide has turned.

However you see the election shaping up, things have turned a corner in a way that will never be the same again.

A fed up electorate is up against a crumbling empire… and anyway you slice it, Trump’s victory is historic.