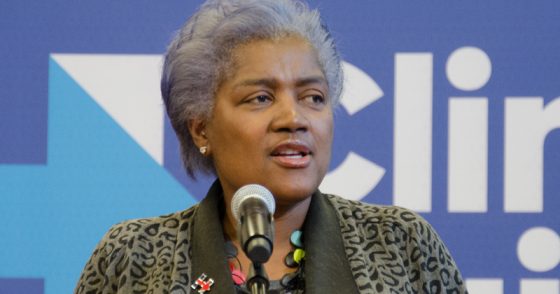 As the shocking revelations published by a former Democratic National Committee interim chairwomen have begun to reverberate throughout the country, the person who wrote them, Donna Brazile, has laughably tried to claim that actual sentences in her own book do not exist.

Brazile first released the explosive allegations that the Clinton campaign had effectively taken over the entire DNC before the primary even began in a piece for Politico that was actually a section of her book turned into an article for the popular beltway insider.

The article directly states that she was looking for evidence (and had found it) that the Clinton team had “rigged” the primary. (emphasis mine)

I had promised Bernie when I took the helm of the Democratic National Committee after the convention that I would get to the bottom of whether Hillary Clinton’s team had rigged the nomination process, as a cache of emails stolen by Russian hackers and posted online had suggested.

I’d had my suspicions from the moment I walked in the door of the DNC a month or so earlier, based on the leaked emails. But who knew if some of them might have been forged? I needed to have solid proof, and so did Bernie.

So there you have it. Straight up and simple. After Brazile took over the DNC she eventually found the “cancer” (evidence) of the primary being rigged and felt like she had to let Bernie Sanders know. There is simply no denying that this is what she wrote.

Obviously this is a shocking allegation that goes hand in hand with other information that already pointed to the fact that the Democratic Primary was rigged in favor of Hillary Clinton.

Eventually the president himself weighed in on the issue:

The real story on Collusion is in Donna B’s new book. Crooked Hillary bought the DNC & then stole the Democratic Primary from Crazy Bernie!

Remember, Brazile had just written one day before that Clinton had rigged the primary which is what Trump stated in his Tweet.

Amazingly, as if she believes the entire country cannot read, Brazile responded to Trump’s Tweet by directly lying with the shocking claim that she never said Hillary rigged anything.

As you can see above in her own words, neither Trump or anyone in the “right wing media” misquoted her. Instead they simply directly repeated them.

One can imagine that Brazile may have been threatened in the 24 hours after the bombshells she dropped in Politico but to publicly state that you did not say something that is in your own book is flabbergasting to say the least.

Did Donna wake up with a horse’s head in her bed this morning? https://t.co/MUZZGku93X