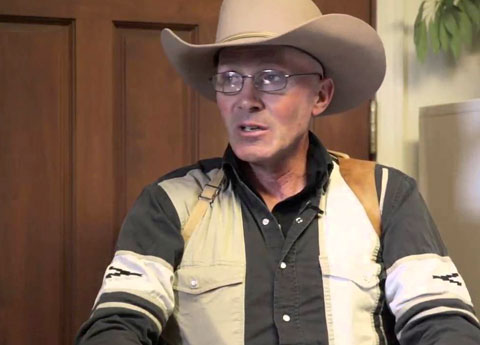 Editor’s Comment: By all accounts, people seem to have regarded Robert “LaVoy” Finicum as a level headed good guy. His family has issued statements indicating that he would never prompt violence or threaten law enforcement with a gun. He may have been involved in a controversial and dicey armed standoff at the Malheur National Wildlife Refuge, but going offensive meant going against his principles.

These statements about LaVoy Finicum’s character would seem to support the eyewitness account – and thus, it would seem that the Oregon State Police have some explaining to do. Wonder what the police dash cam will show? Will people demand it be released?

Precious few details are available today after a shootout between Oregon State Police and several people who had been occupying a wildlife refuge led to the arrest of seven individuals and left the group’s de facto spokesperson and Oregon militia member, Robert “LaVoy” Finicum, dead. As the Bundy Ranch Facebook page announced:

“The resolve for principled liberty must go on.

“America was fired upon by our government and one of liberty’s finest patriots has fallen. He will not go silent into eternity. Our appeal is to heaven.”

There is some confusion over how, exactly, the situation escalated and who escalated it. As reported by OregonLive, “Nevada Assemblywoman Michele Fiore said that Ammon Bundy called his wife, Lisa Bundy, from the back of a police car Tuesday night.

“Fiore, a vocal supporter of the Bundy family, said that Ammon Bundy told his wife that Finnicum was cooperating with police when he was shot.

“But sources told The Oregonian/OregonLive that Finicum and Ryan Bundy disobeyed orders to surrender and resisted arrest.”

Several occupiers are claiming Finicum had his hands in the air when he was shot by police, reported CNN.

According to a press release, both the FBI and Oregon State Police “began an enforcement action to bring into custody a number of individuals associated with the armed occupation of the Malheur National Wildlife Refuge. During that arrest, there were shots fired.”

This “enforcement action” took place approximately 15 miles north of Burns, Oregon, along Highway 395, in the form of a traffic stop. The leaders were heading to John Day for a community meeting held at the John Day Senior Center when the shootout and subsequent arrests occurred.

Ryan Bundy also suffered a non-life-threatening gunshot in the exchange, but was treated at a nearby hospital and released into custody of the FBI. Also arrested at the scene were Ammon Bundy, Ryan Payne, Shawna Cox, and Brian Cavalier. About an hour later in the town of Burns, Joe O’Shaughnessy was taken into custody, and conservative Cincinnati radio host Pete Santilli, who began a livestream of events as they unfolded, was also arrested outside a hospital in Burns, “after pleading with the FBI to allow him to set up a convoy to save the women and children in the refuge,”said a Facebook page associated with Santilli, according to OregonLive.

Separately, Jon Ritzheimer turned himself in to police in Peoria, Arizona, without incident, after a visit with his family, which he filmed and posted on his Facebook profile along with a plea for donations to fund his legal defense.

According to the FBI, all eight people arrested “face a federal felony charge of conspiracy to impede officers of the United States from discharging their official duties through the use of force, intimidation, or threats, in violation of Title 18, United States Code, Section 372.”

Finicum, who is a father of 11, stated in an interview earlier this month that he refused to end up behind bars:

“I’m just not going to prison. Look at the stars. There’s no way I’m going to sit in a concrete cell where I can’t see the stars and roll out my bedroll on the ground. That’s just not going to happen. I want to be able to get up in the morning and throw my saddle on my horse and go check on my cows. It’s OK. I’ve lived a good life. God’s been gracious to me.”

“We all thought it would end, but not like this,” Finicum’s daughter, Challice Finicum Finch, told NBC News. “My dad did stress that they couldn’t pull a gun on [officers] unless they pulled a gun. They were all committed to not firing on federal agents.”

“My dad was such a good man, through and through,” said Arianna Finicum Brown to OregonLive. “He would never want to hurt somebody, but he does believe in defending freedom and he knew the risks involved.”

The FBI has “initiated a containment” of the Malheur Refuge — which is still occupied by some members of the group — and announced they will require photo identification and vehicle searches for anyone attempting to pass in or out of that area. A press conference is scheduled for 10:30 am.