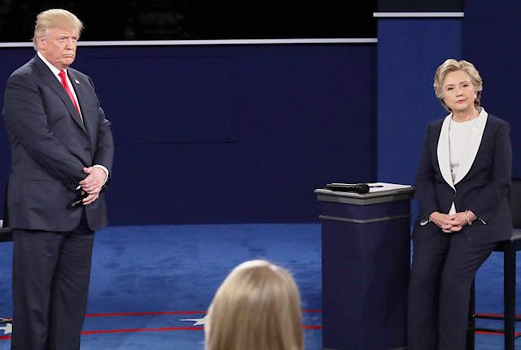 Editor’s Comment: Can this be considered a fair election anymore? No. This is an inside job, and that does not qualify as an election. People need to come to terms with that first. There was no legitimate victory in the DNC nomination; as it stands, there is no reason to disbelieve that Trump is a ringer for Hillary, or that the established powers will not rigged, beg, borrow or steal the election to “correct” the mistake of the electorate. Regardless of the outcome, the ethics and pretend demeanor of rightful, constitutional power and election of the president are dead. THIS IS NOT A REAL ELECTION… just a Banana Republic, or whatever else you want to call it.

Not only is the system itself broken beyond repair. Not only is the electoral process rigged to favor the dug in, sold out, blood oath establishment candidates. Not only do the dynasties control the parties and dictate the outcomes. But… but even the trimmings of “democracy” and “voting” and “debates” and “public discourse” are so heavily manipulated by the corporate media that the path Hillary took to the presidency appears legitimate on the surface, while just behind the curtain, the entire seasons has been scripted according to the rules of reality TV – fitting, of course, as it stars the king of reality shows, and as it parades a drama that is meant to suggest qualification and appropriate vetting allowing egregious crimes & misdemeanors are above reproach, and impossible to check & balance.

Hillary will go down in the history books, either as the most corrupt and ambitious title holder in American history, or as the white washed, iconic woman president, appropriate for office, trained for power and set in stones, monuments, statues and portraits from now to kingdom-come in CNN & TIME-magazine illustrated “histories” about the progress of America and control over society by Her. Long live big sister.

The media is in overdrive trying to ignore the death by a thousand cuts wealth of info falling out of the Wikileaks Podesta email dumps.

Now, on top of everything else (which is saying a lot), it has also come out that interim DNC chair Donna Brazile likely obtained questions to a Bernie Sanders vs. Hillary CNN/TV One town hall and fed them to Hillary’s campaign people in advance.

CNN, of course, is pointing the fingers at TV One but come on, they don’t call it the Clinton News Network for nothing.

The email obtained by POLITICO was written by town hall co-moderator Roland Martin on the day of the town hall to CNN producers. But it shows him using word for word the language of a question that Brazile appeared to have sent to the Clinton campaign a day earlier. That email, from Brazile to the campaign, was included in yesterday’s release of hacked emails by Wikileaks of Clinton campaign chair John Podesta.

The exact question, word-for-word, was tossed around between all of these people in the lead up to the town hall, and then a paraphrased version of it magically popped out of the mouth of an audience member introduced by Martin who asked the question to Hillary at the town hall.

Everyone is dodging this bullet, including Brazile, Martin, CNN, and TV One. When asked about it, Martin first claimed he never shared anything but when confronted with the emails, he admitted sharing them with CNN. Brazile is tossing her blame back at the Russian government who she says everyone knows is responsible for the Wikileaks hacks in order to ‘interfere with our election’.

If that’s true, which most people don’t believe it is, then the Russian government has done us a favor by showing the American people plainly and simply that we do not have even remotely fair elections in this country.

This has openly been the most obviously cheated, rigged, stolen, fraudulent, fake election possibly in the history of American politics.

The sad part is so much evidence has come out now that the entire thing deserves a do-over that in a sane world, that would already be happening. Instead, Hillary is still stomping her way toward the White House with full knowledge that no amount of disclosure of her misdeeds can stop her.