Coup In Turkey Has Become Dark “Purge Of 50,000 Teachers, Judges, Soldiers and Officials” 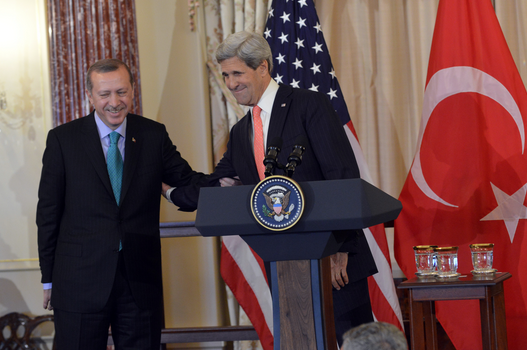 Editor’s Comment: This coup remains highly suspicious, and the relationship between Erdogan and the U.S. as time moves forward will be telling. This coup-turned-into-a-purge will have repercussions for the Syrian War and the “fight” against ISIS, which curiously has involved incubating and armed ISIS as well.

The dark nexus between secret intelligence operations and these ongoing wars and destabilizations in the Middle East and surrounding areas have bogged down American interests and cost the lives of hundreds of thousands of people who’ve been exploited by a sham war fought for phony reasons against bought-and-paid for enemies. The alliance with Turkey is shakier than ever, as the role of the U.S. in the attempted coup remains unclear.

Erdogan’s Staged Coup Has Resulted In A Purge Of 50,000 Teachers, Judges, Soldiers And Government Officials

Barack Obama’s “friend” in Turkey is a deeply corrupt radical Islamist dictator that has just staged a coup to consolidate his grip on power.  As I have reported previously, 1,845 “journalists, writers and critics” have been arrested for “insulting” President Erdogan over just the past two years, and a couple of years ago he had a monstrous 1,100 room presidential palace built for himself that is 30 times larger than the White House.  With each passing day, more evidence emerges which seems to indicate that the recent “coup” was a staged event meant to enable Erdogan and his allies to eliminate their enemies and solidify their stranglehold over the nation.  At this point the number of victims of “Erdogan’s purge” has hit 50,000, but the final number will not be known for quite some time.

Of course there is a possibility that the coup was not staged, but if it wasn’t staged it was the worst military coup that I have seen in my entire lifetime.  As Fox News has pointed out, not a single high level member of government was killed or detained…

Among the questions being asked are why coup plotters didn’t execute the most basic steps in seizing power, like securing Erdogan and other top officials. Not a single member of his cabinet and inner-circle AKP party leadership was detained. Nor did coup plotters effectively take control of TV, radio and internet outlets. The government TRT station and CNN Turk were for a time occupied by alleged coup plotters, who quickly retreated as the putsch fell apart.

It is being reported that soldiers that took part in the coup claimed “that they thought that they were taking part in military exercises”, and those running the “coup” allowed Erdogan’s plane to fly across the country without incident.  Here is more from Fox News…

Coup plotters also failed to secure most airports and other transportation hubs, didn’t occupy or attack Erdogan’s $600 million presidential palace, and failed to intercept his plane before, during or after he flew from one of the country’s busiest and most accessible airports back to Istanbul. This despite the supposed active participation of top generals in Turkey’s Air Force, which maintains a fleet of F-16 aircraft easily capable of tracking, intercepting or – if it came to it – shooting down Erdogan’s plane.

There were opposition soldiers that did occupy Ataturk International Airport for a short time, but they suspiciously left just in time for Erdogan’s plane to land.

So much about this supposed “coup” absolutely stinks, and that includes the fact that lists of judges, teaches, soldiers and government officials to be rounded up after the coup appear to have been prepared ahead of time.  This is so obvious that even the EU commissioner in charge of Turkey’s membership bid, Johannes Hahn, is commenting on it…

“It looks at least as if something has been prepared. The lists are available, which indicates it was prepared and to be used at a certain stage,” Hahn said.

“I’m very concerned. It is exactly what we feared.”

So far, at least 50,000 people have been rounded up or stripped of their positions since the coup.  The following breakdown of “the purge” comes from the BBC …

Not included in that list are 15,200 education workers and 1,577 university deans that were just sacked…

But while Turkey’s press is already mostly under Erdogan’s control, it is the educational witch hunt fallout that is far more troubling, and just as expected over the past hour we have gotten a glimpse of just how extensive the Turkish’s president cleansing of secular society will be, when the state-run Anadolu news agency reported that Turkey’s ministry of education has sacked 15,200 personnel for alleged involvement with a group the government claims is responsible for Friday’s failed coup.

Even more shocking, Anadolu reports that Turkey’s Board of Higher Education has requested the resignations of all 1,577 university deans, effectively dismissing them.  Of the deans dismissed, 1,176 worked in public universities and 401 in private institutions.

In addition, the teaching licenses of 21,000 teachers there were employed at private educational institutions have been revoked.

In one fell swoop, Erdogan is eliminating as much institutional opposition to his leadership as he possibly can.  And not only is he stripping them of their jobs and arresting many of them, CNN is reporting that he actually wants to push for the death penalty for anyone that has any connection to “treason”…

Turkey’s President refuses to rule out the death penalty for thousands of people arrested after a failed military coup Friday, despite warnings that reintroducing capital punishment could dash Turkey’s chances of joining the European Union.

The Turkish people have made it clear they want death for the “terrorists” who plotted the coup, Erdogan said in his first interview since the July 15 attempt.

Erdogan has been a radical Islamist throughout his entire political career, and his goal has always been to transform Turkey from a highly secular society into a highly Islamic one.

Sadly, now he has the power to do just that.

So what does the future hold for people of other faiths in Turkey?  Well, we may have gotten some clues on the night of the alleged “coup”…

During the night of 15 July, unidentified assailants broke the glass panels in the door of the Malatya Protestant Church. The pastor, Tim Stone, said he thought someone with a grudge against the church had taken advantage of the general unrest.

Meanwhile, in Trabzon, on the northern coast, around 10 people smashed the windows of the Santa Maria Catholic Church, where in 2006 a priest, Fr. Andrea Santoro, was murdered. The attackers tried to break into the church, but a group of Muslim neighbors drove them away, before contacting a priest.

And as Erdogan continues to transform into a Turkish version of Adolf Hitler, he is putting his nation’s membership in NATO in jeopardy.  The following comes from the Telegraph…

In an ideal world, it would be in everyone’s interests for Mr Erdogan to cease his efforts to turn Turkey into an Iranian-style Islamic republic, thereby allowing Turkey to retain its place at Nato’s top table. But if he really is determined to pursue his radical Islamist agenda, then Nato will have no option but to rid itself of its troublesome Turkish ally.

What is happening in Turkey right now is truly chilling.

A country that is already a member of NATO and that was supposed to become a member of the European Union is rapidly becoming a hardcore radical Islamic dictatorship.

Let us keep a close eye on these developments, because ultimately they could have tremendous implications for Europe and for the entire Middle East in the years ahead.