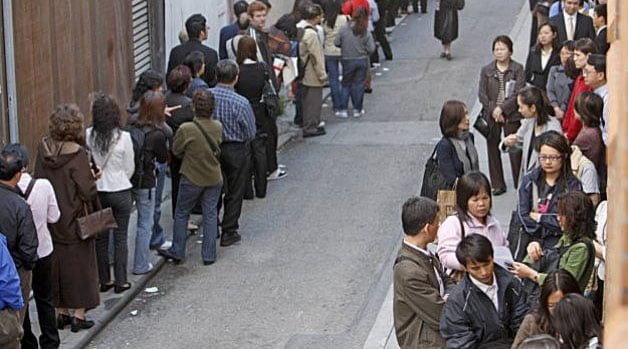 Editor’s Comment: We can talk about it in terms of the numbers of people out of the labor force, the decline of manufacturing, the rise in the cost of living, the harsh penalties under zero percent interest rates for investment and equity. It is really the great shafting.

The system doesn’t need most of us around anymore, and regards the lot of society to be degenerate and extraneous. The new normal means austere and dependent.

The Age Of Stagnation (Or Something Much Worse)

Excerpted from Satyajit Das’ new book “The Age Of Stagnation”,

The world is entering a period of stagnation, the new mediocre. The end of growth and fragile, volatile economic conditions are now the sometimes silent background to all social and political debates. For individuals, this is about the destruction of human hopes and dreams.

For most of human history, as Thomas Hobbes recognised, life has been ‘solitary, poor, nasty, brutish, and short’. The fortunate coincidence of factors that drove the unprecedented improvement in living standards following the Industrial Revolution, and especially in the period after World War II, may have been unique, an historical aberration. Now, different influences threaten to halt further increases, and even reverse the gains.

Since the early 1980s, economic activity and growth have been increasingly driven by financialisation – the replacement of industrial activity with financial trading and increased levels of borrowing to finance consumption and investment. By 2007, US$5 of new debt was necessary to create an additional US$1 of American economic activity, a fivefold increase from the 1950s. Debt levels had risen beyond the repayment capacity of borrowers, triggering the 2008 crisis and the Great Recession that followed. But the world shows little sign of shaking off its addiction to borrowing. Ever-increasing amounts of debt now act as a brake on growth.

Growth in international trade and capital flows is slowing. Emerging markets that have benefited from and, in recent times, supported growth are slowing.

Financial problems are compounded by lower population growth and ageing populations; slower increases in productivity and innovation; looming shortages of critical resources, such as water, food and energy; and manmade climate change and extreme weather conditions.

The world requires an additional 64 billion cubic metres of water a year, equivalent to the annual water flow through Germany’s Rhine River. Agronomists estimate that production will need to increase by 60–100 percent by 2050 to feed the population of the world. While the world’s supply of energy will not be exhausted any time soon, the human race is on track to exhaust the energy content of hundreds of millions years’ worth of sunlight stored in the form of coal, oil and natural gas in a few hundred years. 10 tons of pre-historic buried plant and organic matter converted by pressure and heat over millennia was needed to create a single gallon (4.5 litres) of gasoline.

Europe is currently struggling to deal with a few million refugees fleeing conflicts in the Middle East. How will the world deal with hundreds of millions of people at risk of displacement as a resulting of rising sea levels?

The official response to the 2008 crisis was a policy of ‘extend and pretend’, whereby authorities chose to ignore the underlying problem, cover it up, or devise deferral strategies to ‘kick the can down the road’. The assumption was that government spending, lower interest rates, and the supply of liquidity or cash to money markets would create growth. It would also increase inflation to help reduce the level of debt, by decreasing its value.

It was the grifter’s long con, a confidence trick with a potentially large payoff but difficult to pull off. Houses prices and stock markets have risen, but growth, employment, income and investment have barely recovered to pre-crisis levels in most advanced economies. Inflation for the most part remains stubbornly low.

In countries that have ‘recovered’, financial markets are, in many cases, at or above pre-crisis prices. But conditions in the real economy have not returned to normal. Must-have latest electronic gadgets cannot obscure the fact that living standards for most people are stagnant. Job insecurity has risen. Wages are static, where they are not falling. Accepted perquisites of life in developed countries, such as education, houses, health services, aged care, savings and retirement, are increasingly unattainable.

In more severely affected countries, conditions are worse. Despite talk of a return to growth, the Greek economy has shrunk by a quarter. Spending by Greeks has fallen by 40 percent, reflecting reduced wages and pensions. Reported unemployment is 26 percent of the labour force. Youth unemployment is over 50 percent. One commentator observed that the government could save money on education, as it was unnecessary to prepare people for jobs that did not exist.

Authorities have been increasingly forced to resort to untested policies including QE forever and negative interest rates. It was an attempt to buy time, to let economies achieve a self-sustaining recovery, as they had done before. Unfortunately the policies have not succeeded. The expensively purchased time has been wasted. The necessary changes have not been made.

There are toxic side effects. Global debt has increased, not decreased, in response to low rates and government spending. Banks, considered dangerously large after the events of 2008, have increased in size and market power since then. In the US the six largest banks now control nearly 70 percent of all the assets in the US financial system, having increased their share by around 40 percent.

Individual countries have sought to export their troubles, abandoning international cooperation for beggar-thy-neighbour strategies. Destructive retaliation, in the form of tit-for-tat interest rate cuts, currency wars, and restrictions on trade, limits the ability of any nation to gain a decisive advantage.

The policies have also set the stage for a new financial crisis. Easy money has artificially boosted prices of financial assets beyond their real value. A significant amount of this capital has flowed into and destabilised emerging markets. Addicted to government and central bank support, the world economy may not be able to survive without low rates and excessive liquidity.

Authorities increasingly find themselves trapped, with little room for manoeuvre and unable to discontinue support for the economy. Central bankers know, even if they are unwilling to publicly acknowledge it, that their tools are inadequate or exhausted, now possessing the potency of shamanic rain dances. More than two decades of trying similar measures in Japan highlight their ineffectiveness in avoiding stagnation.

Heart of the Matter

Conscious that the social compact requires growth and prosperity, politicians, irrespective of ideology, are unwilling to openly discuss the real issues. They claim crisis fatigue, arguing that the problems are too far into the future to require immediate action. Fearing electoral oblivion, they have succumbed to populist demands for faux certainty and placebo policies. But in so doing they are merely piling up the problems.

It is not in the interest of bankers and financial advisers to tell their clients about the real outlook. Bad news is bad for business. The media and commentariat, for the most part, accentuate the positive. Facts, they argue, are too depressing. The priority is to maintain the appearance of normality, to engender confidence.

Ordinary people refuse to acknowledge that maybe you cannot have it all. But there is increasingly a visceral unease about the present and a fear of the future. Everyone senses that the ultimate cost of the inevitable adjustments will be large. It is not simply the threat of economic hardship; it is fear of a loss of dignity and pride. It is a pervasive sense of powerlessness.

For the moment, the world hopes for the best of times but is afraid of the worst. People everywhere resemble Dory, the Royal Blue Tang fish in the animated film Finding Nemo. Suffering from short-term memory loss, she just tells herself to keep on swimming. Her direction is entirely random and without purpose.

The world has postponed, indefinitely, dealing decisively with the challenges, choosing instead to risk stagnation or collapse. But reality cannot be deferred forever. Kicking the can down the road only shifts the responsibility for dealing with it onto others, especially future generations.

A slow, controlled correction of the financial, economic, resource and environmental excesses now would be serious but manageable. If changes are not made, then the forced correction will be dramatic and violent, with unknown consequences.

During the last half-century each successive economic crisis has increased in severity, requiring progressively larger measures to ameliorate its effects. Over time, the policies have distorted the economy. The effectiveness of instruments has diminished. With public finances weakened and interest rates at historic lows, there is now little room for manoeuvre. Geo-political risks have risen. Trust and faith in institutions and policy makers has weakened.

Economic problems are feeding social and political discontent, opening the way for extremism. In the Great Depression the fear and disaffection of ordinary people who had lost their jobs and savings gave rise to fascism. Writing of the period, historian A.J.P. Taylor noted: ‘[the] middle class, everywhere the pillar of stability and respectability . . . was now utterly destroyed . . . they became resentful . . . violent and irresponsible . . . ready to follow the first demagogic saviour . . .’

The new crisis that is now approaching or may already be with us will be like a virulent infection attacking a body whose immune system is already compromised.

As Robert Louis Stevenson knew, sooner or later we all have to sit down to a banquet of consequences.