Civil War Erupts Between Black and Blue As Chaos Looms Over America: “The End Is Coming” 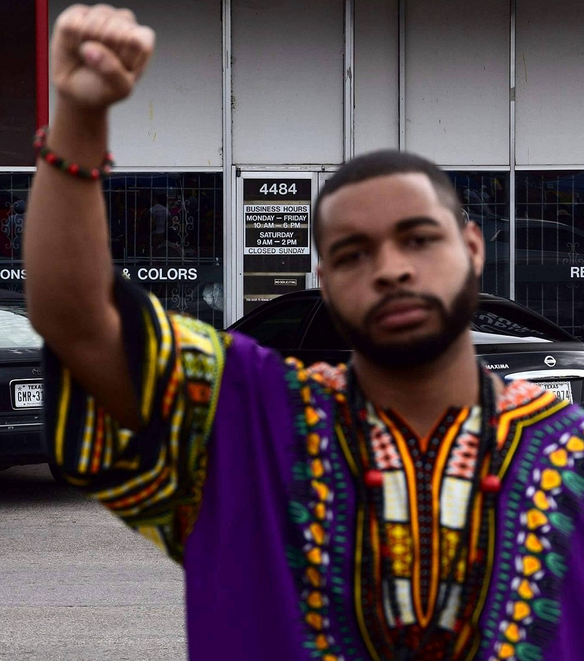 Is all out civil war and widening unrest coming to America?

There’s good reason to think that it could be.

So far, the official story is that at least one sniper killed 5 police officers, shooting a total of twelve. The now-deceased 25 year old Micah Xavier Johnson has emerged as the prime suspect. Earlier reports claimed that there were between two and four snipers involved in the shooting, but now it is now clear whether or not other suspects taking into custody are still considered to be involved.

Dallas Police Chief David Brown emphasized statements allegedly made by the sniper indicating that race and an intent to kill white officers was his primary motive. People are the country were protesting the recent police killings of Philandro Castile and Alton Sterling during traffic stops.

It seems that Johnson, before being killed by a robot bomb, managed to explain his motivations to police during the standoff that resulted in his death.

Around 11pm, cops cornered a suspect at nearby El Centro College and attempted to negotiate with him, but four hours later the talks failed and a robot was brought in to detonate a bomb and kill the suspect.

Before he died however, the gunman told the hostage negotiator his motivations behind the attack.

Authorities have identified the shooter as Micah Xavier Johnson, a 25-year-old from Texas with no criminal history or ties to terror groups. He allegedly claimed to have acted alone, countering previous reports that as many as four gunmen were involved in the massacre.

The horrific shooting spree in Dallas last night will do several things to further divide this country.

Despite the peaceful march of Black Lives Matter in Dallas in outrage over the recent police shootings of black men, the brutality and scale of this event will reflect poorly on the group, though it is unlikely its members had anything to do with it. The group has been active in opposing both Hillary Clinton and Donald Trump, and it is unclear whether this event could slow their momentum.

Regardless, it sets the scene for a greater clamp down and atmosphere of repression during protests in general, and furthers the divide between black and white, and police and people.

The hatred and perceived differences will only be exacerbated. There is the sense that something major is coming.

Moreover, this sensational event sparks the chaos that some in the system seem to want – and only a few short weeks ahead of the RNC convention in Cleveland, July 18-21, and the DNC convention in Philadelphia, from July 25-28.

Are riots at these and other events, and consequential martial law headed our way?

Mr Walsh said, in a tweet that has now been deleted, ‘3 Dallas cops killed, 7 wounded. This is now war. Watch out Obama. Watch out black lives matter punks. Real America is coming for you.’

The suspect reportedly told police “The End is Coming.”

Whether or not people will take sides, everyone will be on alert, and the potential for an unruly mix of violence to overshadow peaceful protest has deepened. The possibilities for chaos and unrest checked by an unrelenting police state are more real than ever.

Everything necessary to put these United States on total police state lockdown are already firmly in place, I’ve been following it closely for nearly a decade. These things have been put in place not for foreign terrorists, but for the American public once they inevitably revolt against their economic slavery and hopelessness. The powers that be knew all of this was coming, and they are entirely prepared for it. Are you prepared? Senseless violence is the only justification needed to put marginalized Americans in walled ghettos like the Israelis have done to so many Palestinians. Don’t think it can’t happen here? Just watch.

While the facts are still coming out about what really happened in Dallas, it is clear that impact it will have on everyone’s psyche, and the state of the country.