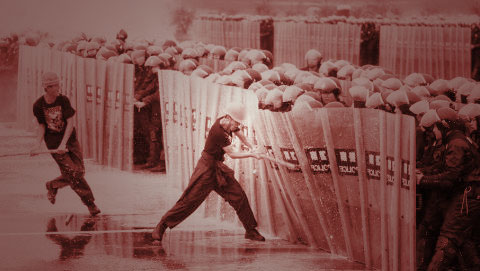 Editor’s Comment: And it all tumbles down. That’s what the world may be saying after one or two more flash points. The downward spiral of China’s economy of course looms large over the American economy, and it isn’t doing anything to improve stability, jobs or opportunity.

With recent developments to fire half a million workers in China, as well as recent announcements that the Trans-Pacific Partnership (TPP) would destroy about half a million American jobs, there is reason to think the global economy is digging its own grave. That won’t result, however, in the death of the deal makers at the top, but rather of the average people living in those societies, and reaping the consequences of harsh economic times. As Zero Hedge notes, China has been preparing for a “working class insurrection” for some time now – and so has the United States and its military forces.

Sadly, there is much more coming. With America next in line, the question is: how bad will it get?

China Warns “Social Stability Threatened” As 400,000 Steel Workers Are About To Lose Their Jobs

In late September, we were stunned to read (and report) that in the first mega-layoff in recent Chinese history, the Harbin-based Heilongjiang Longmay Mining Holding Group, or Longmay Group for short, the biggest met coal miner in northeast China had taken a page straight out of Jean-Baptiste Emanuel Zorg’s playbook and fired 100,000 workers overnight, 40% of its entire 240,000 workforce.

For us this was the sign that China’s long awaited “hard landing” had finally arrived, because as China’s paper of record, China Daily, added then: “now, many migrant workers struggle to find their footing in a downshifting economy. As factories run out of money and construction projects turn idle across China, there has been a rise in the last thing Beijing wants to see: unrest.”

We added that “if there is one thing China’s politburo simply can not afford right now, is to layer public unrest and civil violence on top of an economy which is already in “hard-landing” move. Forget black – this would be the bloody swan that nobody could “possibly have seen coming” and concluded that as for the future of China’s unskilled labor industries, the Fifth Element’s Jean-Baptiste Emanuel Zorg has a good idea of what’s coming.

Fast forward to today when, if not a full million, Xinhua reports that as part of China’s proposed excess capacity production curtailments the country’s steel production slash will translate into the loss of jobs for up to 400,000 workers, estimated Li Xinchuang, head of China Metallurgical Industry Planning and Research Institute. Li said more people will be affected in the upstream and downstream industries. According to some estimates just like every banker job in New York “feeds” up to three downstream jobs, so in China every worker  in the steel industry helps support between 2 to 3 additional job.s Which means, 400,000 primary layoffs would mean a total job loss number anywhere between 1.2 and 1.6 million jobs!

As a reminder, previously China had announced that it would cut steel production capacity by 100 to 150 million tonnes, while coal production will be reduced by “a relatively large amount,” according to a statement released Sunday by the State Council. We have yet to get an estimate of how many coal jobs will be lost.

The reason we were, and remain, skeptical about China ever following through on this production curtailment is precisely the massive layoffs that will result: layoffs which would enflame an already tenuous employment situation because as we showed recently, the number of worker strikes in China has gone parabolic in the past year, soaring to a record high over 2,700 in 2015, more than double the previous year’s total.

Li confirmed this very disturbing trend when he told Xinhua that “large-scale redundancies in the steel sector could threaten social stability.”

Which brings us to the most important topic facing China: how it will respond to the imminent labor market crisis as millions of workers are laid off either voluntarily, or as a result of bankruptcies of their employers: this, as we said in November, was the biggest risk facing China.

One avenue China is actively pursuing realizing it is years behind the curve, is the ad hoc implementation of an unemployment “safety net” – a form of unemployment benefits like those which recently laid off Americans are entitled to for extended periods of time while they try to find a new job. This will not be easy as China has absolutely no practical plan how to implement this.

According to Xinhua, “China will raise funds to help workers reestablish themselves should they lose their jobs when coal and steel firms close amid campaigns to cut overcapacity.”

A large number of coal workers are expected to be affected by future capacity cut, although the State Council did not specify the scale.

To deal with looming redundancies, an “industrial restructuring fund” was initiated on Jan. 1, pooling money from factories across the nation based on their power consumption.

“As required by the State Council, related departments are formulating rules on the use of the industrial restructuring fund,” said Jiang Zhimin, vice head of China National Coal Association.

“As far as I’m concerned, the bulk of the fund will be allocated to redundant workers,” said Jiang. The fund will be partly used to compensate laid-off workers, according to Sunday’s State Council statement.

Demonstrating just how “serious” this proposal is, the State Council called on enterprises to think outside the box and find ways to reduce redundancies and compensate laid-off workers.

We give this track about a 1% chance of manifesting in something practical.

In a separate proposal, the government is also encouraging redundant workers to start their own businesses, with tax breaks and other preferential policies.

Alas, the creation of millions of new profitable businesses (because unprofitable startups only thrive in Silicon Valley) is far, far more difficult than it sounds in some Beijing spreadsheet.

A previous round of economic restructuring in the 1990s, when China was transforming from a planned economy to a market economy, saw tens of millions of people losing their jobs, particularly those employed by state-owned enterprises.

Although many redundant workers started businesses, the rising unemployment created social problems. In the current round of economic restructuring, inviable and non-competitive “zombie enterprises” are being targeted by the government, as oversupply has hammered steel prices below the cost of cabbages and beaten coal price to a multi-year low.

This time, Xinhua says that the government will pay more attention to those who lose their jobs. The reason is simple: a few million angry, unemployed workers and China will have precisely the working class insurrection it has been preparing for since 2014.

Xinhua concludes by saying that the leadership attaches great importance to job creation amid the economic slowdown, which is ironic because economic slowdowns are always accompanies by mass layoffs. There is some hope for spin yet: “now a low unemployment rate provides room for the capacity glut reduction…. Surveyed unemployment rate in major Chinese cities was around 5.1 percent in 2015, which remained at a low level, compared with an average of 6.8 percent for the 34-member Organization for Economic Cooperation and Development (OECD) last July.”

The problem, of course, is that just like every other economic indicator in China, this one too is utterly wrong and dramatically inaccurrate, and is simply meant to goalseek what a few politicans demand be shown so they get a few approving nods from the Politburo.

Just how disconnected from reality China’s official unemployment rate is, both now and one year from today, will ultimately determine how violent the social upheaval will be when – as part of its hard-landing – China proceeds to lay off (tens of) millions of low-skilled workers leading to the inevitable violent response.