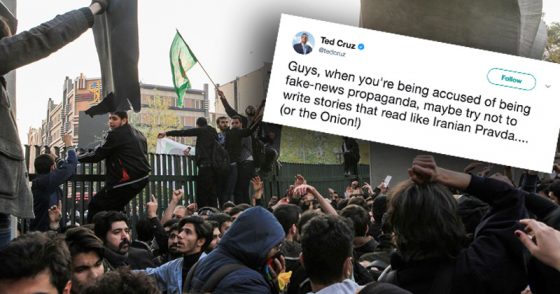 CNN’s recent coverage of protests in Iran have sparked outrage on social media after the liberal news outlet appeared to report only on pro-regime demonstrations.

After virtually no coverage Friday, CNN put out an article Saturday morning originally titled “Iranians Hold Pro-Government Rallies,” which got the attention of conservatives in both media and Congress.

Dear @CNN : What is happening in Iran is not about Mr. Trump. It’s about Iranian liberty. #IranianProtests #Iranprotests pic.twitter.com/EMF8sBVb9z

It’s almost as if @CNN is rooting for the Islamo-Facist hardliners in #Iran.

Dead silence on the protests.

When I first saw people tweeting about this story I figured CNN must have other coverage of the anti-government Iran protests on their website, too. Just checked. This is the only one. Hmm. https://t.co/eUjuBRUJV1 pic.twitter.com/wHqk20zC4Q

“Guys, when you’re being accused of being fake news propaganda, maybe try not to write stories that read like Iranian Pravda….(or the Onion!)”

Guys, when you’re being accused of being fake-news propaganda, maybe try not to write stories that read like Iranian Pravda…. (or the Onion!) https://t.co/va8hLctCMN

Cruz also gave a statement on Facebook calling for the U.S. to support the Iranian people.

CNN has since updated its article, now entitled “Iran’s Government Warns Against ‘Illegal’ Gatherings After Protests.”

Although CNN is not using the more appropriate and accurate headline “Iranian People Protesting Tyrannical Islamic Regime Across Country,” it’s still a step in the right direction.

To be fair, CNN’s own Jake Tapper has been providing decent coverage of the Iranian protests in Saturday morning tweets and retweets.

Empirically it is astounding and appalling that any country in the 21st century has such a dress code for women. https://t.co/CQAEB6aYfq

Still, it’s not surprising CNN would do such a thing. Lately they’ve been off their game with recent coverage, such as earlier this month when it reported on an email sent to Donald Trump Jr. offering special access to WikiLeaks documents – only for it to be revealed that those documents were already on public record.