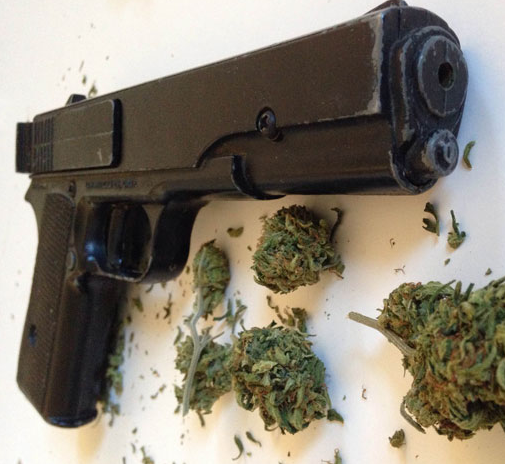 Editor’s Comment: I have often wondered if/when the softening on the War on Drugs would be used as a weapon of disarmament. This is an interesting ploy by the feds to use the move towards decriminalizing marijuana as a means of barring Second Amendment lovers from purchasing guns – since it will be argued that marijuana introduces a dangerous or ‘irrational and unpredictable’ element. Of course, they don’t ban alcoholics or prescription pill poppers from purchasing weapons, but I’m sure that many people would be interested in doing so if they could.

The rise of Obamacare has also institutionalized medical snitching on patients. Whereas their data and personal information were once held sacred, today they are precious fragments in the age of data analysis, and federal reporting. If/when mental health patients confess to certain trigger words (i.e. feeling angry, violent, suicidal, anti-government, depressed, etc), doctors will flag patients as potentially dangerous. Felons are barred from purchasing, and that category is likely to expand – in the name of Sandy Hook, the Pulse nightclub and whatever else they roll out on the table.

Doctors have been encouraged by executive order to ask patients about guns… and no doubt keep records on this special category of patients. Likewise, admitting to drug use (as one does by signing up for a medical marijuana list-database) will be used to flag patients as potentially unstable, dangerous and/or otherwise unfit for owning a gun.

Put those altogether, and there is some pretty ripe potential for abuse, and broad platform to keep a wide gulf between the 2nd Amendment and the world that the U.S. population lives in – one that government sees as sick and needy, and in need of stern supervision and social intervention. This is the beginning of the bureaucratic end of our freedoms.

The battle between the federal government and the states on marijuana legalization has been ongoing for years, but now it’s being fought in an arena that most people have never considered. Now the feds are trying to restrict gun ownership for legal users of marijuana.

Five years ago a woman named S. Rowan Wilson tried to buy a firearm in Nevada after she received a medical marijuana card. The purchase was turned down by the gun store, because marijuana is still illegal at the federal level, and there are federal laws that prevent illegal drug users from buying firearms. That led to a lengthy court battle which concluded this week.

The 9th circuit court decided 3-0, that banning the sale of firearms to a medical marijuana card holder, does not violate the Second Amendment. The court determined that since marijuana is still illegal at the federal level, and since it can be assumed that anyone possessing a medical card is probably using the drug, they can be prevented from buying a gun.

Senior District Judge Jed Rakoff of the 9th circuit court, explained his ruling by saying that marijuana “raises the risk of irrational or unpredictable behavior with which gun use should not be associated.” So far there’s no word on whether or not the court will prevent gun sales for consumers of alcohol, or any other legalized drug that causes unpredictable behavior.

Joshua Krause is a reporter, writer and researcher at The Daily Sheeple. He was born and raised in the Bay Area and is a freelance writer and author. You can follow Joshua’s reports at Facebook or on his personal Twitter. Joshua’s website is Strange Danger.