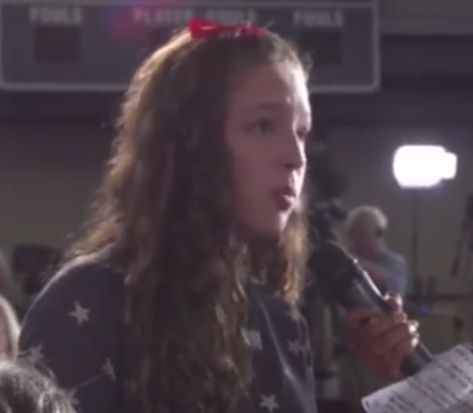 Editor’s Comment: How much more ridiculous and phony do things have to get? Can Hillary – and the establishment powers that are bank rolling her – really not conjure up a legitimate crowd, or a genuine person to hug, question or interview the scandal-ridden former Secretary of State?

Must everything really be so hammed up and carefully scripted? The answer is yes, because this is an individual who couldn’t connect with average Americans to save her life, and who is too focused on attaining power to let anything or anyone get in her way. At a certain point, which we already passed long ago, this entire charade, this entire process, just became so utterly shameful. It really is.

At a Hillary Clinton town hall yesterday in Haverford, Pennsylvania, a 15 year old girl was supposedly “chosen at random” to ask a question of the former Secretary of State.  But, the well-scripted performance raised some suspicion with a YouTuber named Spanglevision who decided to dig a little deeper.  And, wouldn’t you know it, the “random” participant was none other than child actor, Brennan Leach, whose father just happens to be Pennsylvania democratic State Senator Daylin Leach.  Oh, and in case it wasn’t obvious, Daylin supports Hillary for president…shocking.

So, here was the original question from Brennan:

Brennan:
“Hi Madam Secretary.  I’m Brennan and I’m 15 years old.  At my school, body image is a really big issue for girls my age.  I see with my own eyes the damage Donald Trump does when he talks about women and how they look.  As the first female president how would you undo some of that damage and help girls understand that they’re so much more than just what they look like?”

And here was Hillary’s attempt at knocking the soft ball out of the park…it’s almost like she knew the question was coming.

“I’m so proud of you for asking that question. You are right — my opponent has just taken this concern to a new level of difficulty and meanness.  And, it’s shocking when women are called names and judged solely on the basis of physical attributes.

“My opponent insulted Miss Universe. I mean, how do you get more acclaimed than that?  But, it wasn’t good enough. So we can’t take any of this seriously any more. We need to laugh at it. We need to refute it. We need to ignore it. And we need to stand up to it.”

Here is the full analysis from Spanglevision.  Among other things, he points out that Brennan is the only participant of the night who reads her question from a prepared script.

And, of course, as pointed out by Spanglevision, the mainstream media couldn’t get enough of the adorable young girl and her “brave” question. Here’s coverage from the New York Times….

In fact, pretty much everyone covered the story including The Washington Post, New York Magazine, The Chicago Tribune, Cosmopolitan…it’s pretty hard to find a media outlet that didn’t cover it actually.

But this isn’t young Brennan’s first acting gig in the political circus.  Turns out her dad, Daylin, utilized her acting skills in the following campaign video when he ran for Congress back in 2014.

And, just in case you would like to see more of her acting work, here is Brennan acting in a movie entitled “Once Upon A Time Trillium Vein.”