Stock Market Too Big to Fail: “Fed Will Prop It Up Whatever the Cost” 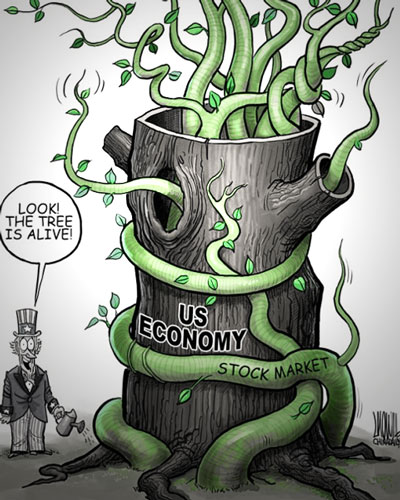 This article was written by Charles Hugh Smith at his Of Two Minds blog.

Editor’s Note: The stock market has always been an illusion sitting on top of an elephant on a balancing ball in a circus act… now the Federal Reserve is once again acknowledging that it will intervene at any and all costs – just to keep the confidence game going.

Did anyone else notice that the alarming stock market plunge was followed by false reassurance by the mainstream media, and then convenient distractions in the news via tragic mass shootings and other scandals to keep our eyes elsewhere while the patchwork game to prop the market back up where completed. And, voilà… back to normalcy and new artificial highs. Everything is fine… just go back to your mobile phones and TV entertainment.

Is the Stock Market Now “Too Big to Fail”?

Who knows what will trigger Fed intervention; that information is asymmetric, i.e. only known to Fed insiders.

Correspondent Bart D. recently speculated that the U.S. stock market was now “too big to fail,” that is, that it was too integral to the global financial system and economy to be allowed to fail, i.e. decline 40+% as in previous bubble bursts.

The U.S. stock market is integral to the global financial system in two ways.Now that investment banks, pension funds, insurers and multitudes of 401K retirement plans are dependent on current equity valuations, a crash would impair virtually the entire spectrum of finance from hedge funds to banks to insurers to pension plans.

A decimation of these sectors would impact the U.S. economy and thus the global economy very negatively.

In other words, it’s not just valuations that make stocks integral to the economy and Status Quo–the market’s signaling is now the key to sentiment.In economist Michael Spence’s work, the information available to participants is asymmetric: roughly speaking, those on the “inside” have better information than those on the “outside.”

The stock market addresses this asymmetry by signaling what’s really going on via price: if the market sells off, that tells even those with little other information that all is not well in the economy.

A rising market sends the opposite signal: everything’s going well. If the participant isn’t experiencing good times himself, he will still defer to this signal, reckoning that his own financial stagnation is an anomaly rather than the norm.

This explains why a rising stock market is now essential to the Status Quo: if the market reverses, everyone who sees mostly stagnation in their corner of the economy will realize that is the norm, not a local aberration.

If the stock market is now too big to fail, the Federal Reserve will have to prop it up whatever the cost. Ultimately, this may require indirect purchases of stocks–an action that other central banks are already pursuing directly or indirectly via proxies.

This shouldn’t surprise us. After all, the Fed directly bought $1.5 trillion in mortgages (mortgage backed securities) to prop up the housing market, and a few trillion dollars in Treasury bonds to push interest rates down.

Just as a speculative guess, perhaps the line in the sand that will trigger Fed intervention is an extension of previous tops in the S&P 500: a line that is support that the Fed cannot let become resistance.

Who knows what will trigger Fed intervention; that information is asymmetric, i.e. only known to Fed insiders. Perhaps a break below 1,711 will cause the Fed to ready its financial blitzkrieg.

A drop to 1,620 or so would represent a 23+% decline from all-time highs–a decent correction by historical standards, but one that–if reversed in short order–would not necessarily trigger a financial meltdown.

That cannot be said of a drop that erased 50+% of the SPX’s current value. If the market is indeed now too big to fail, the Fed will be forced to take unprecedented action if the decline hurtles past correction to carnage and full-blown meltdown.

This article was written by Charles Hugh Smith at his Of Two Minds blog.