SCHAEF REPORT BRIEF: The Intra-day Crash Heard Around the World 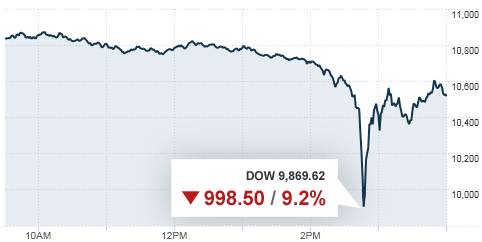 How Does Something like this Happen? Were investors really panicking enough to send the DOW plunging down 9% in a matter of minutes or was there something else at work here? Before we can answer this we have to look at a few things: How are the values of market indexes actually calculated? Was the market falling as a whole or were there just a few key stocks imploding that gave the appearance of the entire market crashing? What role did computerized trading play in this? 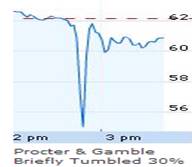 se this divisor to see how an individual stock can impact the entire average. One stock that made the new quite a bit on Thursday was Proctor and Gamble (PG). PG opened the day at 62.16 and dropped as low as 39.37; a change of 37% (30% of which happened in minutes) before rebounding back just as sharply and closing at 60.65.

So, for this brief moment, PGâ€™s drop alone caused the DOW to drop over 172 points.

Other Stock â€œAnomaliesâ€ that Day. There were many other instances of stocks plummeting to ridiculous lows at the same time PG was tanking:

Other stocks fell to fractions of a penny during that period. For a brief moment in time over $1 Trillion of value was completely wiped out before the rebound occurred!

High Frequency Computerized Trading. Now that the â€œfat-finger trader theoryâ€, the theory stating that a trader must have entered in a â€œBâ€ for billion instead of an â€œMâ€ for million on a trade, has been debunked most people are pointing the finger at high-frequency trading systems (or HFTs) to be the cause of this temporary meltdown. In short, HFT Systems are basically computer programs that can make thousands of trades per second. In an ever fluctuating stock market, HFT Systems bring in billions of dollars of profit by fractions of a penny at a time. Not only are the trades high frequency, but also high volume. These systems have been compared to Ferraris driving on the same street among tricycles. Sound unfair? After all, us humans canâ€™t make decisions that fast, and even if we could we couldnâ€™t call our brokers fast enough to execute those trades. Algorithms programmed into these systems look for changes in market activity in order to seek out profit making opportunities. On May 6, 2010 the stage was already set for a volatile day with the uncertainty of Greeceâ€™s fate. Once the Dow Jones had fallen roughly 400 points that is when some say the computers took on a life of their own. Remember in the movie â€œWar Gamesâ€ when apparently the computer decided humans were a waste of space so it was going to start an atomic war? Yeah, kinda like that: 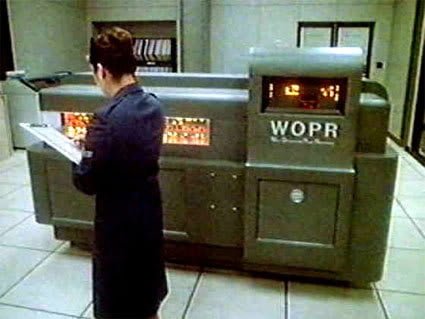 If this alone doesnâ€™t make you feel vulnerable or the least bit upset that market activity can be so greatly manipulated, perhaps I should define a few more terms for you:

Long Term Effects of the Events of 5/6/2010. Fear that the stock market itself is just a house of cards ready to come crashing down at any minute because of â€œcomputer interferenceâ€ is enough to spook every day investors. Many people are saying that 5/6/2010 was too close a reminder of what they went through in the fall of â€™08, and want to just take their money off the table â€“ especially after having such a nice 14 month bull run.

As markets were imploding on 5/6/2010, can you guess which particular investment was going straight up pretty much the whole time? Iâ€™ll give you a hint. It looks like this: 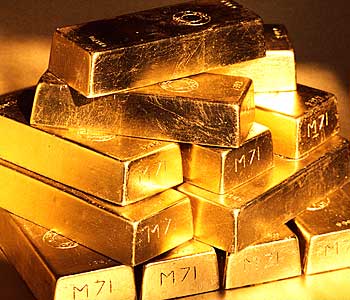 Gold has always been, and will always be, the safe haven of choice for investors in an uncertain economic environment. Why? Because its real money that you can put your hands on. One thing people are learning is that the stock market simply isnâ€™t real. At least its not any more real than the equity we used to have in our homes 3 years ago. Will we have another day like 5/6/2010? I donâ€™t know, but the more gold I own the more I donâ€™t care if we do or not. Bye for now, Schaef.