Schaef Report: All Tsunamis Contain More Than One Wave (April 2010)

â€œâ€¦but while they prate of economic laws, men and women are starving. We must lay hold of the fact that economic laws are not made by nature. They are made by human beings.â€ â€“ Franklin Delano Roosevelt (ridiculing fiscal conservatives while lobbying for the â€œNew Dealâ€ in his 1932 address to the Democratic National Convention)

Sorry, Frank, but the law of supply and demand is not something humans made up. Economics is just another science that studies the true nature of things while trying to articulate them through laws and theories (just like thermodynamics, gravity, relativity, etc). Iâ€™m sure Rooseveltâ€™s speech must have appealed to the masses at that time regardless of how wrong he was. One of FDRâ€™s biggest achievements, which lives on to this day and which was supposed to make sure nothing like the Great Depression would ever happen again, the FDIC, was created during this time, but will it really prevent another Great Depression? Letâ€™s see how this financial levy is holding up against the current economic storm surge.

What is insurance? According to the Insurance and Securities Schools of America, â€œInsurance is a social device for spreading the chance of financial loss among a large number of people.â€ It then goes on to say, â€œThe insurance company, or insurer, receives relatively small amounts of money, referred to as premium, from each of the large number of people buying insurance. A large uncertain loss [financial catastrophe] is traded in this way for a small, certain loss [the premium].â€ In other words, the idea is that many healthy people pay into a pool that only a few unhealthy people are drawing from. In that way insurance is basically a legalized ponzi scheme which many partake in believing that it offers the ultimate security. However, if the number of unhealthy people grew too large too quickly, like all other ponzi schemes, massive claims pouring in would create a run on the funds and cause it to come crashing down Bernie Madoff style.

FDIC Failed Bank List. The FDIC failed bank list is a public website http://www.fdic.gov/bank/individual/failed/banklist.html which lists every failed bank in the United States going back to the 4th quarter of 2000. In late â€˜07 the mortgage crisis hit and the banks immediately felt it, but no one foresaw how bad it would get by 2009.

Please note that the last bar on the graph only represents the first quarter of 2010. The sharp rise in failed banks recently are thought mainly to be the result of the mortgage crisis that began in late 2007 and which is continuing to unfold today.

All tsunamis contain more than one wave. Though the residential mortgage crisis is still playing out in full force today and is punishing the banking industry with unrelenting ferocity, many believe the worst is behind us. Unfortunately, many experts say that there is a second wave coming. This second wave will be due to all of the â€œexoticâ€ residential mortgages which were written from 2004 â€“ 2007 that are going to reset to higher rates very soon. Â One of these is the Option ARM. The Option ARM became very popular during the housing boom because it made a home which was over-inflated in price affordable to the average Joe. Hereâ€™s how it works. Most option ARMs offer 4 payments: 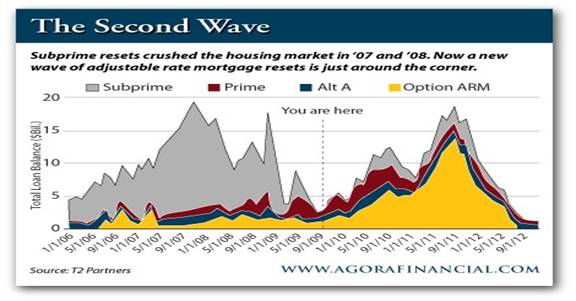 This second wave is sure to cause many more foreclosures which will result in many more bank failures in the years to come. Obviously, this crisis is far from over.

Current State of the FDIC. Currently, the FDIC is requiring all participating banks to pay their deposit insurance premiums up to 3 years in advance. Kind of like an interest free loan if you will. Why? Because they are broke. Replenishing all deposits up to $250,000 held at so many insolvent banks has been completely devastating to the FDIC. Imagine if a deadly epidemic spread across the US causing life insurance claims to rise 4500%. Do you think life insurance companies might start going belly up?

The Perfect Storm. What if I told you this 2nd wave is guaranteed to be even worse than the first wave due to another type of loan not even mentioned on the chart above? As I brought up in the August 2009 Schaef Report, the catastrophe getting ready to happen in the commercial real estate market could be the final blow to an already crippled banking industry which may launch us into total chaos. According to Elizabeth Warren, Chair of the Congressional Oversight Panel: â€œ2,988 banks are currently classified as having a risky concentration of commercial real estate loans. All of them are small or midsize banksâ€¦ And theyâ€™re already weakened because of the financial crisis. The panel is deeply concerned that commercial real estate losses could jeopardize their stability, and that the damage will contribute to prolonged weakness throughout our economy.â€

Below see the chart I included in my Aug 2009 report showing that commercial real estate prices have recently come back down to 2004 levels. That means that any loan made after the end of 2004 is now most likely upside down. Commercial real estate loans are not like residential at all. They are mainly short term balloon loans which must be refinanced every 5-7 years. We are just beginning to enter that period right now. 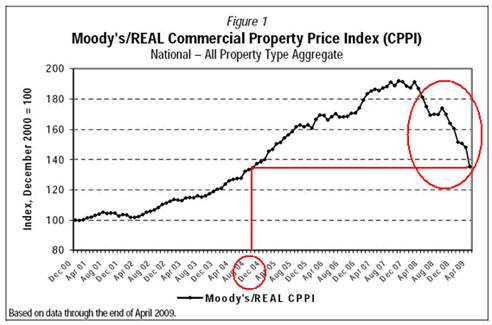 Real estate attorney Stephen Meister appeared on Fox Business with Neil Cavuto late last year and said the following: â€œPractically every real property in the country in every major city was refinanced between â€™05 and â€™08 on relatively short terms. Those loans are now coming due.â€ When asked how much of those are in danger, he said â€œAll of them. There is no refinancing market whatsoever.â€ This does not bode well for the FDIC and the deposits that it supposedly guarantees, because many more failed banks are sure to result in the second wave than in the first wave we just experienced. So the next logical question is: Can the FDIC become insolvent? If so, how does this scenario play out?

Likely scenarios for the FDIC.

Regardless of how this crisis plays out it is sure to diminish the already waning confidence in the dollar, and that is the real concern. As most people know a government can never technically go bankrupt because it prints its own money. The real problem occurs when the rest of the world doesnâ€™t want to lend us money anymore. This will be the beginning of the currency crisis.

â€œEventually this dollar is going to quit working and everybody is gonna know what poverty is all about.â€ â€“ Ron Paul

Itâ€™s very simple. When you borrow money to pay the interest on your debt you just get into more debt faster. As your debt grows, it becomes more and more unsustainable. Each time you must borrow more to stay afloat. This is the reality of our national deficit. 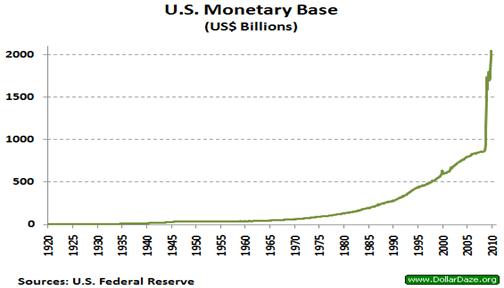 Notice the upward curve of the line indicating that our monetary base is taking less and less time to double in size. Looking at the chart above you can see that it took approximately 30 years (1945 to 1975) for our monetary base to double in size. Then it only took 15 years (1975 to 1990) to double again.Â  Then it took 10 years (1990 to 2000) to double again. This has resulted in more rapidly increasing inflation over the years. Now look at what has happened since 2008. Can this be real? How can anyone say that this will not result in hyperinflation?

The only way to protect your money is by investing in gold and silver. Other countries have had hyperinflation before, and the result is always the same. No matter how far the currency sinks in value, gold and silver always protect against losses. At the end of WWI the Weimar Republic attempted to pay war reparations by printing massive amounts of money. Hyperinflation was the result. People who held marks lost everything, but people who held gold and silver were totally protected against this and actually benefited. 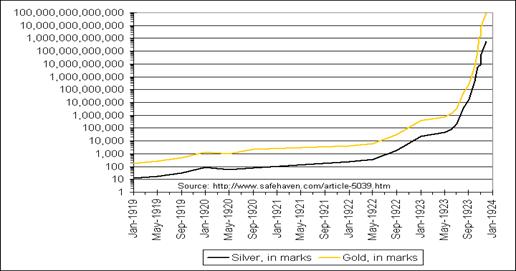