Alas, poor gold bug; I knew him Horatio. He had the brains to be perfectly positioned in the great gold bull market of 1999-2020. Yet he did not make any money from his wisdom. Take, for example, the sell-off of April 16, 2010. Gold was just about to make another powerful move to the upside. But the sell-off scared him away, and he missed the move. What was it that he did wrong? 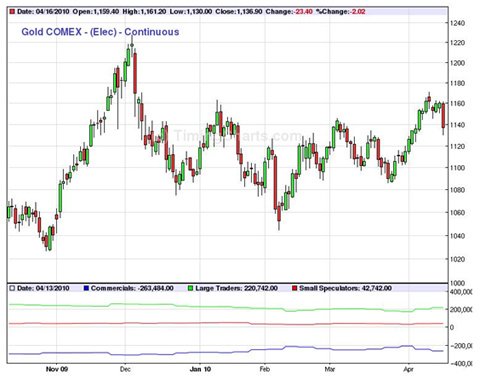 Those who read these articles know that I am a big chart man, and last weekâ€™s action in the markets is a good example of why this is so important. There is much to be learned from the charts, but the most important is perspective. When one looks at any object, perspective is very important. Take, for example, a mountain range. One can see it from a satellite picture taken from earth orbit. One can see its majestic beauty from a few miles away (where it dominates the horizon). Or one can focus on a single daisy on the mountainside on a summer day. These are three different pictures, and they carry three different emotions.

The vast majority of your fellow traders (against whom you are competing) are not chartists. The emotion with which they see the market roughly corresponds to the emotion of the average trader. He remembers the market action for the past few months, and what has happened further back sort of fades into the distance.

First, as soon as you start to trade the market and have your own money at stake, your perspective changes radically. You see everything through a microscope, as it were. Time slows down, and everything becomes much more vivid. Now, what is the message of the above chart?

The answer is clear. Gold is moving sideways. Isnâ€™t it obvious? Well, not exactly: 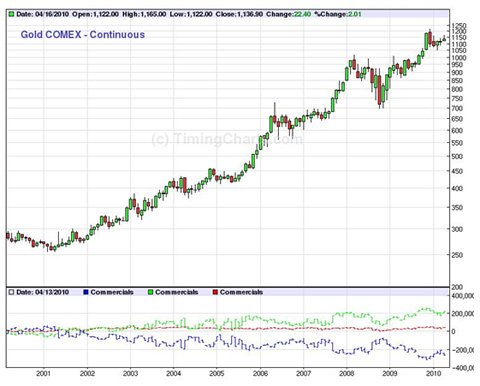 This is why I usually emphasize the 10-15 year chart. It gives an entirely different picture. Gold is going up.

Well, what is it? Is gold moving sideways, or is it moving up? And this is not just a matter of semantics. The question is being asked from the very practical viewpoint of how do I make the most money?

In theory, it might seem that one can make money at either level. Either focus on the short term and play the up and down moves, or focus on the big picture and hang on tight for the big move. But over a century of trading by some of the countryâ€™s best has given a different answer, and I never tire of saying it. THE BIG MONEY IS MADE IN THE BIG MOVE.

Yes, you can catch a short term move. You can catch many of them. But the short term is too hard to predict. Take, for example, Fridayâ€™s decline in gold. It was caused by the U.S. Governmentâ€™s lawsuit against Goldman Sachs. Like many other events which move the markets this was almost impossible to predict for two reasons.

One can imagine aggressive fundamental traders who employ a host of flies on the wall who travel over the world and spy on the key events which will move markets. One of the flies is in the U.S. attorneyâ€™s office in Washington, D.C. Another fly is in the office of the oil minister of Saudi Arabia. And another fly has infiltrated into a radical terrorist group which is planning to blow up an oil pipeline. (And then there are 4,567 more flies at various key points around the world where market-moving events are likely to happen, all ready with their cell phones to report in as soon as an important news item comes their way.)

But even if your army of flies is ready to go, you face a second problem. You can be the smartest economist in the world. You can correctly forecast the economic results of all the news your flies bring to you. But how do you know how the markets will interpret that news? The most famous example of misinterpretation of a news item was Nixonâ€™s imposition of price and wage controls on August 15, 1971. If your fly on the wall in the Oval Office in August 1971 had reported this to you, then, being a good economist, you would have said, â€œWow, this means that Nixon is planning to print money. This is bullish for gold. Iâ€™m going to buy.â€

But the stupid traders in the markets said, â€œWow, the great leader is taking decisive action against inflation. This means that prices will not go up. Therefore, Iâ€™m going to sell gold.â€

Now the stupid traders were wrong in the long run. But there were so many of them that they dominated the markets in the short run, and both gold and gold stocks went down. And this is another serious problem with fundamental analysis. You can have flies on the wall all over the world. You can correctly analyze the economic effects of the events they report. But you can never be sure that the market will agree with your analysis. All your good work goes down the tubes because of that large majority of stupid people (at least stupid compared to you) who move the market in the opposite direction from what it should be.

A good example of this is Fridayâ€™s attack on Goldman Sachs. If you can remember back two years ago, when the Wall Street bailout passed Congress, candidate Obama supported it. This support was crucial because it allowed the Democratic members of Congress to vote for the bill, and it was the Democrats who provided the votes needed for passage. So in a very real sense it was Barack Obama who gave the $750+ billion to Wall Street (most of which ended up at Goldman Sachs).

In short, the entire anti-Wall Street aura of Obamaâ€™s lawsuit against Goldman is for show. It is to convince the stupid public that he is against the rich. Democrats have done this since the New Deal. Rich Americans are willing to put up with this anti-rich rhetoric as long as the Government keeps stealing money from the average American and giving it to them, and they prove this by donating money to New Deal politicians. Nothing has changed for 77 years. The only difference is that the original New Dealers were more subtle about it.

So for traders to fear that Obama is suddenly turning against the rich is naivetÃ© of an extreme kind. It is the exact same type of misinterpretation of a news event as the price controls of 1971. In the One-handed Economist of April 16, 2010, I present my argument that Fridayâ€™s decline in gold presents a buy opportunity.

If you compare the two gold charts in this article, you will come to understand the importance of the observation that the big money is made in the big move. It has occurred to many people to focus on the short term and buy the dips and sell the rallies. This can work for a while. But sooner or later the market puts on a good move, and then you are left behind. It is well known, for example, that in the optionsâ€™ markets the option buyers usually lose, and the option writers usually win. This is because the buyers are too focused on the short term. They get overexcited by the prospect of big profits in a short period of time. So they rush in and overpay for their options. This is all the writer needs. He plays it conservatively, gets the odds on his side and plays the percentages. He is a winner. The short term buyer is a loser.

The proven path to success in the markets is to latch on to a long term move whose cause is not understood by most traders. This fundamental cause will dominate the markets, and it is most visible on the long term chart. It took almost 5 years for gold to form its saucer bottom, and one was best advised to be otherwise occupied during that time. But once the saucer broke to the upside (Dec. 2002) that was the signal that gold was going up. And it has been up ever since.

We are a long way from the end of this gold bull market, and the best way to make some pretty pennies from it is to keep focused on the big move. Keep in mind that long term chart, and expect reactions or consolidations to occur for periods of about half a year. Design for yourself a strategy within your means which will being in the profits as the long term move unfolds.

Getting out near the end of the move is another problem but is not too difficult. It is some distance in the future, and we can leave this problem to another day. Right now the danger is not that we will overstay the top. It is that we will be scaredy cats and sell too soon. In this way, the market runs away from us, and we are not in it.

To guide you and help you to execute such a strategy, I write an economic letter, the One-handed Economist, on a fortnightly (every two weeks) basis. I was a gold bug in the 1970s, a stock bug in the 1980s and â€˜90s and am a gold bug again at the present time. The One-handed Economist costs $300 per year. You may subscribe by visiting my web site, www.thegoldspeculator.com and clicking on the Pay Pal button, or you may subscribe the old fashioned way by sending a check for $290 ($10 cash discount) to The One-handed Economist, 614 Nashua St. #122, Milford, N.H. 03055. Note, OHE is dated every other Friday and mailed on Saturday or Sunday.