I AM THE GREATEST

But I am claiming credit here for being intensely bullish on gold over the past several months and warning my subscribers that the recent third attempt at the $1,000 level would be the charm. Let us look at the 2 year chart of GLD (preferred in this case because it gives a clear picture of volume). 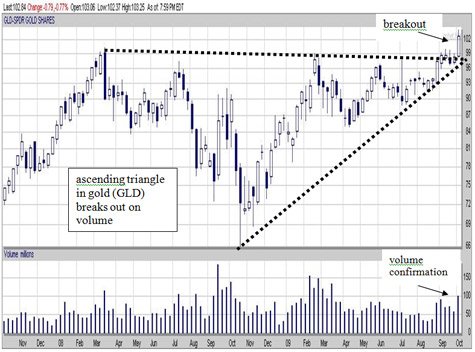 Here is the weekly basis chart of GLD (the Exchange Traded Fund for gold). The last week on the chart says it all. It blasted through all resistance. You know that gold has had a ceiling at $1,000 for the past year-and-a-half. But unlike the field of construction, when something blasts through and blows the roof off in economics it does not have to be repaired. In economics, the old ceiling becomes a new floor. Thus should gold come back down to $1,000 at any time in the future (which it may do once or twice on a technical test), it will meet powerful support and is very unlikely to break through.

What is even better, if gold does fall back below $1,000, this will signal that something is very wrong with our bullish scenario. Therefore anyone who buys now will realize that he has made an error by the time gold falls back to $950-$975. No one likes to lose money. But the smart trader knows that occasional losses are inevitable. He tries to keep such losses small, and the current technical pattern in gold gives him the opportunity to do so. Let your profits run and cut your losses short.

So if gold was a buy below $1,000, it is a better buy now. And the people to listen to are the advisors who told you that this was going to happen.

This, by the way, is a very important principle for beginners in economics. Sad to say in our day and age there are a great many frauds in the field. Around the middle of the 20 th century a group of big New York bankers made a conscious and deliberate effort to corrupt the teaching of economics in American colleges. They succeeded in planting a collection of crackpots and phonies into the economics departments of most universities, who in turn turned out several generations of crackpot students. All these crackpots have impressive degrees and titles, and the only way that you can tell them is that almost everything they say turns out wrong.

I have discussed this previously, but it is such an important point that it bears repetition. Some examples are 1) the universal condemnation of gold bugs in 1970 when gold was $35/oz., 2) the virtually universal bearish opinion on the stock market in 1982 with the DJI at 780, 3) the complete failure to predict the stock crash of Sept.-Oct. 1987, 4) the failure of â€œthe great depression of 1990â€ to appear, 5) the bankruptcy of Long Term Capital Management, a hedge fund associated with two â€œNobelâ€ prize winners in 1998 and 6) the amazing decision by the New York Times to buy their own stock in the early days of the century, when it was $40 per share (current price $8.40). Their predictions turn out wrong because they are crackpots, and their theories of economics are wrong. So any time you follow their advice, you are very likely to lose money.

One thing is always true about these crackpots. They will always be negative on gold because their real bosses are all part of the paper aristocracy. These people profit from paper money and always want more paper money. So to say anything nice about gold, in any way, shape or form is absolutely forbidden to them. They went through the entire decade of the 1970s without one of them ever being bullish on gold, even for a few days. (From 1970-1980 gold multiplied by 25 times.) They have gone through the current bull market in gold (now 10 years old) without once ever being bullish. And I can safely predict that they will go through the remainder of this gold bull market (which has many years to run) without ever turning bullish.

How do these people get clients? Well, they have a system. They give titles to each other. You may ask, â€œWhat good is a title given by an idiot?â€ Indeed, that is the rational thing to ask. However, the great majority of people are impressed by these phony titles. Every few years a new economist is raised to star status by the media, and millions of people lose billions of dollars following his advice. No one seems to notice that the bottom line of the advice given by all these â€œstarâ€ economists is always the same. â€œThe government can make us all richer by creating money out of nothing.â€

This week I want to continue my comments about unemployment, and they have suddenly become even more relevant. A controversy has erupted on the Federal Reserve Open Market Committee (the organization which creates the money) as to whether the economy faces a greater threat from â€œinflationâ€ or unemployment. The faction which fears â€œinflationâ€ (which is already composed of 5 of the 11 members of the committee) would go slower in the creation of new money. The faction which fears unemployment would go faster.

Note: During the time the United States was on the gold standard (1788-1933) there was very little unemployment, prices were stable over the period and the U.S. grew to become the wealthiest nation in human history.

We have already discussed the fact that there was so little unemployment in America prior to 1873 that the people of that time had not even invented a word for it. America is a very interesting country from an economic point of view because the 3 basic economic stages, which took the rest of mankind many thousands of years, occurred in this country in just 3 centuries.

When the Pilgrims landed, in 1620, their business partners insisted that they base their economy on communism. This was done for a bit over 2 years (with repeated â€œstarving timesâ€). Then in the spring of 1623, the Pilgrims abolished communism. Their first crop came in big (end July 1623), and the Pilgrims celebrated with the holiday of Thanksgiving. At this time, they lived under what is called a self-sufficient economy. Everybody did everything for themselves. They grew their own food. They built their own houses. They made their own clothes, etc.

By 1624, the Pilgrims, who had no English money, were using corn as money. So they had a money economy and were buying and selling to each other. Certain individuals developed special skills and went into business providing specialized products to their neighbors. For example, Sam may have been especially skilled in building furniture. People gave him corn for his furniture, and he used some of the corn to buy other products he needed. Thus far we have:

At this stage, our furniture builder gets an idea. He can produce more furniture if he hires young John to be his assistant. He teaches John the furniture building art. Because of Samâ€™s skill he soon has John making furniture almost as good as his, and the quantity is doubled. Net more value is created. John can make more money working under Sam, and Sam can make more for himself by hiring young John. This is he beginning of the employer-employee relationship.

We can easily see that the nonsense written by Karl Marx and espoused by many Marxists in our society to the effect that employer and employee are mutually hostile and constitute different classes of people is absurd. Sam offers John a job because it will make more money for him, and John accepts for the same reason. Sam and John, of course, are part of the same social class, and depending on circumstances either one might employ the other.

The next thing that happened was that this employer-employee relationship became very popular. A large number of people began to leave the self-sufficient economy and get jobs. There is a long, colorful history from the latter 19 th century to the early 20 th century as people left their self sufficient farms, moved to the city and got jobs. Now we can add to our economic divisions:

This fact proves that a free market has the ability to provide jobs for all of its people. The left-wing idea that full employment is incompatible with freedom is fabricated by the crackpot economists discussed above. And these are people whose brains are made up of scrambled eggs. If stupidity were a crime, they would all deserve the death penalty.

Not only was the employer-employee relationship so powerful that it provided jobs for everyone in America who wanted one, it also drew millions of people into this country. These people gave up their old culture. They gave up their language. They became Americans. So not only can the American free economy provide jobs for all of its people, it can provide millions of jobs more.

Right now the majority (7) faction on the Fedâ€™s Open Market Committee wants to keep credit easy because of their fear of unemployment. As above, this was unemployment which they created by interfering with economic freedom. (And the way they want to reduce it is by reducing real wages.) If this faction gets its way, interest rates will remain at record lows, and the stock market will continue to rise. However, the stock market is in very delicate territory. It went up by 18 times (from 780 to 14,200). It is a bit overbought. It is sort of like a drunk who needs another drink to maintain his high. If he doesnâ€™t get his fix, he will sober up and come down to reality. If that happens (i.e., if the tightening faction wins), then everyone who is long stocks is going to be badly hurt. On the other hand, gold is still quite undervalued, having risen only 4 times from its 1999 low. If the Fed tightens credit, gold will sail along. It thrives on higher interest rates.

I publish an economic newsletter, the One-handed Economist ($300/year). I have been calling the gold and other markets since 1965. To subscribe, visit my web site at www.thegoldspeculator.com. If you donâ€™t like computers, you can subscribe directly by sending $300 to The One-handed Economist, 614 Nashua St. #122, Milford, N.H. 03055. Or you can get a free sample of my writing by visiting my blog at www.thegoldspeculator.blogspot.com (no charge). This weekâ€™s blog is about the Middle East. Thank you for your interest.